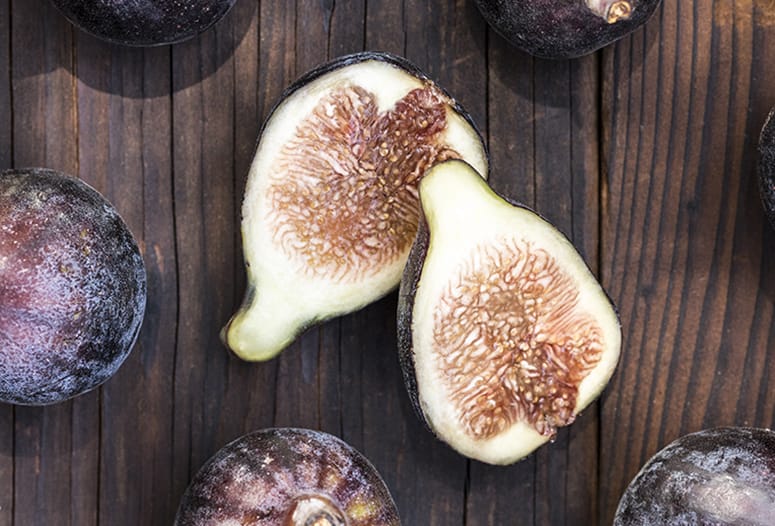 Not long after my wife and I bought our house last August, fruit began to rain from the heavens. Well, not just any fruit. Figs, to be precise. And it wasn’t the heavens, but it was close: the biggest fig tree I’d ever seen.

The great old house we’d found a few miles outside the valley sits on a property with slightly more than an acre of citrus, avocado, pomegranate, and persimmon trees. It wasn’t until we’d lived there a couple weeks that I discovered the gigantic fig tree. The fruit seemed to have ripened overnight. Every day a couple dozen fell to the ground. There were buckets of figs. Pant loads. Boat loads.

At first, we ate them right off the tree. Next, we started making homemade fig bars and fig jam. When this failed to put much of a dent in the deluge, I experimented in the kitchen — once or twice successfully, otherwise with mixed results. I managed to put up a few pints of fig jam and learned to dehydrate them so that we had several pounds of dried figs in the pantry that lasted through Christmas.

Before we became custodians of this humongous tree, I doubt I’d ever eaten more than a handful of figs that weren’t baked into a cookie. I had never really thought much about figs. Last August, I began thinking about them all the time.

In the Coachella Valley, dates get all the love. They have a festival, get blended into shakes, and are generally associated with the romance of the desert. Figs, one of the oldest cultivated fruits in the world, dating back to the city of Jericho 11,000 years ago, are one of the healthiest, most nutritional foods on Earth. They aid the digestive system, as they cleanse the bowels, lower bad cholesterol, reduce hypertension, and promote healthy blood sugar. And they taste great. Who, in their right mind, could pass up a plate of Fig Newtons and a cold glass of milk?

And if the taste weren’t enough to make it one of the greatest gifts of nature, what about the symbolism and mythology of the fig tree? After all, it was the original forbidden fruit in the Garden of Eden (Where did this apple nonsense come from?), and the Bodhi tree under which the Buddha achieved enlightenment was an ancient fig tree (Ficus religiosa).

“They’re not a pretty fruit,” concedes Brett Austin, a horticultural consultant at Moller’s Nursery in Palm Desert who has fond memories of a giant fig tree that once shaded the entire back patio of his house. “The outside looks a little too much like a prune, and when you open it, the inside looks a bit like a gutted rodent.”

Austin is also the first to point out that food prejudices based on aesthetics are pretty indefensible. (If you were visiting Earth from another planet, would a baked Russet potato or a marinated artichoke be your first picks at the buffet?) If there were any justice in the food world, figs would star in the show.

Ficus carica is rightfully revered in the Mediterranean. Its cultivation in the Middle East predates other crops such as wheat and rye by 1,000 years. They were referenced by Aristotle and were an important part of the ancient Roman diet. Their popularity in Italian culture and cuisine has never waned. Italian immigrants in North America brought cuttings with them and grew trees in the inhospitable Northeast. During harsh winters, they would cut part of the root ball in order to bend the tree into a shallow ditch where it would be buried until spring. The fig was among the first fruits planted by Father Junipero Serra and his fellow Franciscans when they established California’s mission system. To this day, the dark purple variety they planted is known as the Mission fig; it’s the most popular and widely cultivated in California. There are countless varieties from Majorca to India, though fig aficionados generally acknowledge Smyrna figs to be unequaled. Internationally, the largest fig producers are Turkey, Egypt, Algeria, Iran, and Morocco.

It is significant that countries with desert climates — environments not dissimilar to the Coachella Valley — produce the most figs. “They are extremely easy to grow in this area,” says Austin, whose nursery currently has 3-foot potted fig trees that are already bearing fruit. “It’s a thirsty tree, so giving it a deep soak is important. It takes about two years to get established and then it will continue to grow and produce.”

Austin says it shouldn’t be surprising that fig trees thrive here. After all, it is a ficus shrub in the same family as the ubiquitous ficus privacy hedges that are grown all over the valley. However, unlike the privacy hedges (and those glamorous date palms), a mature fig tree provides extraordinary shade. The huge leaves (which Adam and Eve used so advantageously to cover their suddenly shameful junk) tend to overlap because of the curving branches. Even in the August midday sun, the area under our fig tree cultivates temperatures as cool as twilight.

As noted previously, the prodigious bounty from our tree resulted in a surplus of the fruit (I discovered a second fruit-bearing tree at the rear of the property), and before it occurred to me to preserve our crop through slow drying at 135 degrees in our oven, we tried to give away small baskets to friends and family. Except for a couple foodies, the reception was a bit underwhelming, even hostile, as if we were quietly accusing the recipients of constipation. This set me on a course to explore new ways of utilizing them at mealtimes. I discovered that, counterintuitively, one of the most popular fig-eating centers in the United States is in the South, particularly the Appalachians. In Ocracoke, North Carolina, they celebrate the fruit with an annual festival. Almost every restaurant in town features their famous, locally created fig cake. I called one of the restaurants in Ocracoke, which is on the Outer Banks, south of Cape Hatteras, for a recipe. They told me I had to come get it in person.

“They are a very versatile fruit,” says Erik Dandee, head chef of Birba in Palm Springs. “I’ve always been more interested in using them in savory dishes rather than in desserts. When you pair it with something salty, it brings out the sweet.” Last year, a standout on the Birba menu was a pizza of goat cheese, duck confit, and figs cooked in balsamic vinegar. Dandee first utilized figs at an Italian restaurant, Genoa, in his native Portland, where a potted fig tree on the property provided all the fruit necessary for experimentation. He likes to change up Birba’s menu every season (all their produce comes from within 100 miles of the restaurant), so while the duck-and-fig pizza may not reappear this fall, he’ll find a way to work in some figs. “We always have an appetizer with burrata, so I might pair it with something like a fig jam.” 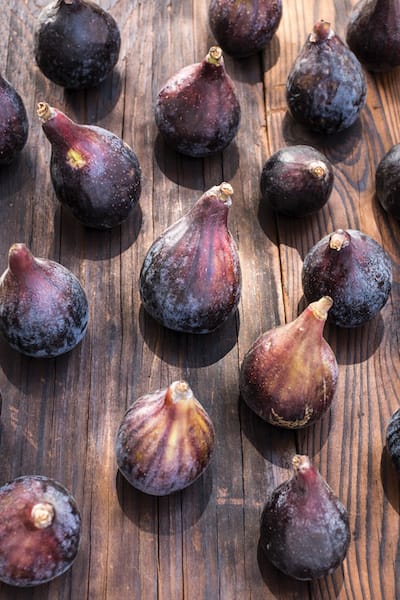 This savory approach to the figs had occurred to me last year as we were reaching the end of the bounty. I recalled that the great L.A. chef Suzanne Goins was the creator of one of the most ubiquitous sweet and salty appetizers of the last decade: the bacon-wrapped date. Though terrific in theory, most of the times I grabbed one of these nibbles off a tray the date was cloyingly sweet and the bacon was too fatty. The texture was interesting, but they usually did not inspire a second swipe at the tray.

I am sure the dish I created last year is not original, but I do think it’s superior to dates and bacon. It combines a bit of sweet, a bit of sour, some bitter, and some saltiness. I made it a half-dozen times last fall and, in the end, I felt we’d given figs their due. If you don’t like it, well, I really don’t give a fig. 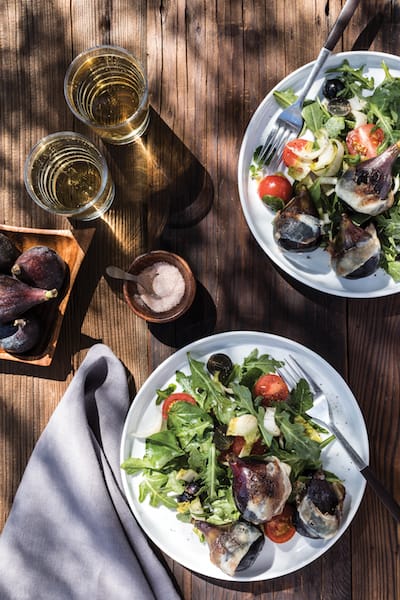 Using a flavor injector, squirt about an ounce of mascarpone into each whole fig (thin the mascarpone if necessary) through its underside opposite the stem. Wrap with a thin strip of pancetta and hold in place with a toothpick.

Wash the arugula and watercress and tear into pieces, separating and discarding larger stems. Chop endive width-wise and wash.

Toss the salad with the tomatoes, grapes, balsamic
(try to find a slightly sweet one from Modena), and olive oil.
Do not overdress. Divide between four salad plates.

On a medium-hot gas or charcoal grill, grill the figs for about 1–2 minutes on each
side, until the pancetta is slightly charred.

Remove the toothpicks, place three figs on each plate, and
serve immediately.