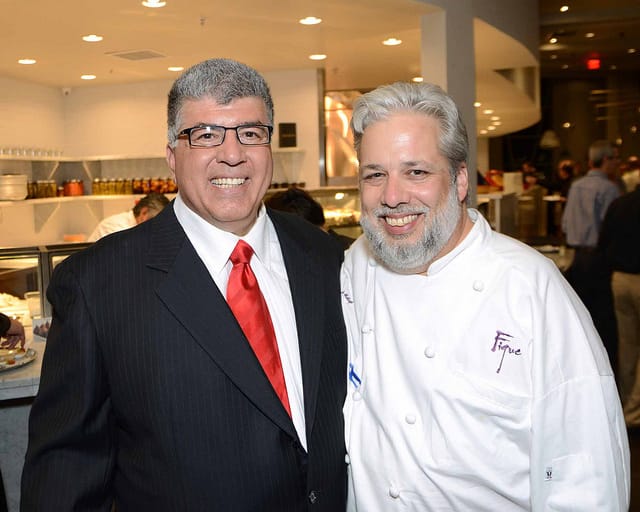 There is no such thing as too much sharing at Figue restaurant.

The newest addition to the La Quinta restaurant scene, officially opening March 26, Figue encourages guests to interact with the Mediterranean cuisine and the culture like you’re sitting down with extended family.

That was an important aspect for owner Lee Morcus, whose family name is well known for the Kaiser Restaurant Group, which features some of the best restaurants in the Coachella Valley like The Chop House, Kaiser Grille and Jackalope Ranch.

Figue is Morcus’ own venture, celebrating the foods he ate growing up in a large Lebanese family.

“I didn’t want to do another traditional three or four-course restaurant,” Morcus said. “Figue is completely about interacting and sharing. First thing that happens when we go out is people want to try what someone else is having. We’re legalizing it. Everybody is encouraged to eat off the other’s plate.”

Even the name expresses the restaurant’s French influences. Figue is French for fig, according to Morcus.

“I wanted a name that was hip, sexy, encompassed the whole region and had a culinary spin to it,” he said. “Somebody near to my heart called me on a Sunday morning and said they had the name. As soon as I heard it, I knew that was the perfect name.”

The restaurant’s layout also creates opportunities to make the food experience engaging. There are lounges and sharing tables, but there are also more traditional table arrangements for private dining.

Designer Thomas Schoos, whose work has included the likes of Tao Las Vegas, Searsucker Restaurant in San Diego and Citizen Smith in LA, collaborated with Morcus to create a casual and comfortable setting with a splash of elegance from a collection of eclectic light fixtures (pictured left) that hang in the main dining areas. Customers are greeted by a large wooden sculpture near the main entrance, contrasting with the Carerra marble counters and chef tables made from Acacia tree slabs.

The variety of eating areas allows the food to take center stage, which is exactly why Morcus chose chef Francois de Melogue. From a field of hundreds of applicants, Morcus narrowed his field to 12 chefs who came in for a three-day interview process in which they talked, cooked and talked some more.

Morcus said de Melogue was the last to be interviewed intentionally because of the introductory letter he had penned in response to the ad.

“It was whimsical, it was poignant, it was beautiful, it was emotional, and it captured my attention,” Morcus said.

de Melogue said as soon as he saw the ad, he knew there was a good match waiting to be created.

“It was like the ad was completely written for me,” de Melogue said. “The only thing that was missing was my first name. Lee opened up his heart to what he wanted this place to be. Not only that, Lee wanted to have a progressive Mediterranean, French, Spanish, Italian, with Moroccan and Greek influences.”

Mediterranean influences run through de Melogue’s family, and many still reside in the south of France. de Melogue grew up expecting to cook and 10 years ago he acquired international fame for helping to name and open Pili Pili in Chicago.

But de Melogue left before the restaurant shut its doors two years later, leaving him with no closure and a sense of wanting another chance to finish the story differently.

“When I left (Pili Pili), I felt it was a little premature,” de Melogue said. “It’s been one of my biggest things if I could go back in life, I would have ended it differently. So in some ways, this job is kind of like life offering similar circumstances, a chance to relive it. I’ve grown a lot professionally since that point and this restaurant is that concept on steroids. For me, Figue is being able to relive the moment and take that extra step past where I went with (Pili Pili).”

de Melogue has incorporated a few tools in the kitchen to help create the melting pot of flavors. A wood burning rotisserie and spit from Italy (pictured left) and a wood-burning oven brings cooking back to its primal roots.

“To me, it’s sexier and primal,” de Melogue said. “It’s fun because a commercial gas oven is very regulated. The temperature in one corner of the oven is similar to another corner. When you use a wood burning oven – ours is 10 feet deep – you have very different zones of heat. There is four tons of stone inside the oven, so you have a pretty thick floor that holds the heat, and then also the dome radiates heat down.”

While de Melogue will draw many of his ingredients from local farms, some will come from the trees and plants surrounding the restaurant. For example, there are 130-year-old Olive trees that will bring brine olives as bar appetizers and date trees creating tasty dishes.

“Nobody in the marketplace is doing something like this,” Morcus said, “and it fits with the desert climate. Frankly, I wanted to blaze a trail that hasn’t been blazed before.”

Figue is located at 47-474 Washington St. in La Quinta. For information or to make a reservation, visit www.eatfigue.com.