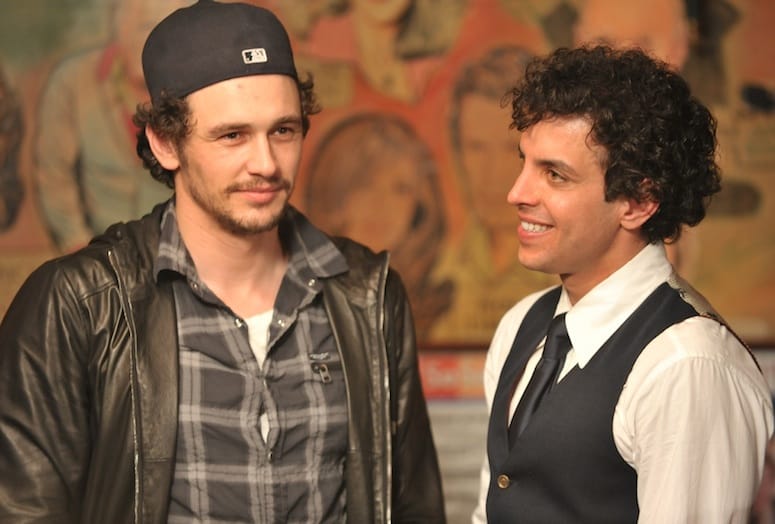 (From left) Director James Franco and actor Val Lauren have combined on the movie "Sal", a look into the life of actor Sal Mineo.
James Laski Photography

There’s a story with every film on how the actor is chosen for the lead role.

“That was it,” he says. “I stared at the phone for a minute, more like 45 minutes, before texting back.”

His response was similarly brief, “Cool.”

Lauren wasn’t even born yet when Hollywood sensation Sal Mineo was tragically murdered in 1976, but he was familiar with the actor on two fronts.

His mother was a movie buff and showed him films with Marlon Brando, Montgomery Clift, and James Dean. He remembers liking Mineo – in Rebel Without a Cause and Giant – and having a peripheral recognition of who he was.

His second introduction of Mineo was at Playhouse West, an acting school Lauren attended, and where the curriculum included Mineo films. However, it wasn’t until he started researching for his role as Sal that Lauren realized he had only scratched the surface of knowing the actor’s body of work and persona.

Sal is James Franco’s ambitious effort to show the essence of Mineo’s whole life in the course of one day, the last day of his life. Mineo was 37-years-old when he was murdered in front of his Hollywood apartment, which became fodder for tabloids of the day because of his known homosexuality.

As a young actor, Mineo was phenomenally successful with his most famous role opposite James Dean in Rebel Without a Cause. His career floundered inexplicably after garnering two Academy Award nominations for Rebel and Exodus.

Some believe it was because he was open about his homosexuality in the closeted 1950s. Whatever the reason his phone stopped ringing, Mineo never gave up the pursuit of his craft and at the time of his death, he was on the cusp of an upswing in his career.

During his research, he found Mineo’s courage and determination to carry on through hardship inspiring. His resilience and commitment spoke to Lauren, who has had his own share of struggles as an actor during the past 16 years.

“As an actor trying to make my way, as any other actor does, there have been a lot of sacrifices and things can be very hard sometimes, so my love and admiration and passion about the craft helps and sustains me when times are really rough. I can rely and rest on the fact that I have a sincere love for what I do,” he says.

Lauren’s passion for acting often leads to intense preparation for a role, as it did for Sal. Aside from watching all of Mineo’s films and reading everything written about him, he lost 20 pounds, took speech and dialect lessons, spent the day with Courtney Burr, Sal Mineo’s lover at the time of his death, and even went to the place Mineo was stabbed to death.

'I found the Exact Spot Where He Died…'

“I found the exact spot where he died and laid down there. I don’t know why, really, it was just something I kind of impulsively was struck to do,” he says. “Maybe it was an effort to relate to him somehow. I wanted to put myself in the position where this multi-faceted artist’s life ended. Connect with him. It was the last thing I did before we started shooting.”

The shooting schedule was grueling, but being on set with James Franco was a revelation for Lauren.

“I’ve got to give it to James Franco because he has outwardly a very seemingly laid back, very relaxed personality but what is not as evident is his laser focus and concentration and confidence,” he says. “The atmosphere he created on set was very familial, very creative, very open. If he so much as saw you in a corner thinking about something and or on the brink of an idea, he would come up and say, ‘Hey what are you thinking?’ He made all of us feel so involved in the process. It was the ideal creative atmosphere for me. Ideal.”

Val Lauren and James Franco have already collaborated on another film together, Interior. Leather Bar, that screened at the Sundance Film Festival this year. Lauren most recently wrapped up the feature film, The Last Knights, playing opposite Clive Owen and Morgan Freeman in a film directed by Kazuaki Kiriya.