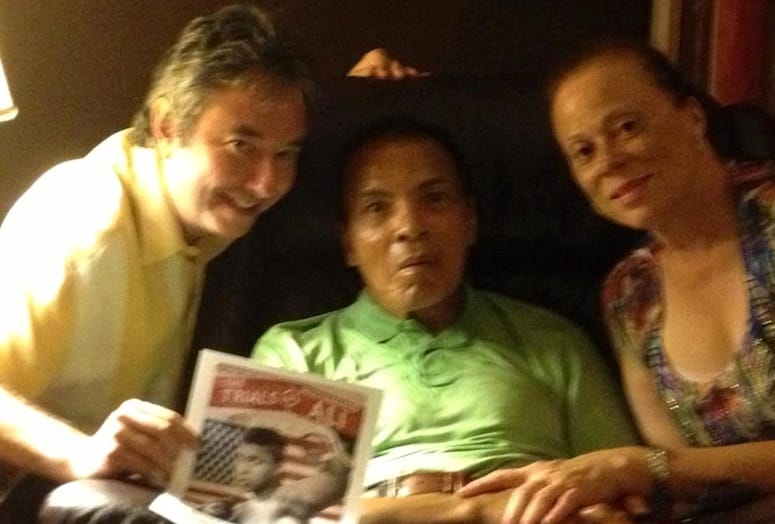 The release of  “The Trials of Muhammad Ali” comes at a time when the nation is looking back on the 50th anniversary of Dr. Martin Luther King Jr.’s “I Have A Dream” speech.

But in contrast to King being cast as a civil rights leader, Ali never saw himself as one despite his four-year struggle in the 1960s to clear his name and regain his professional boxing career after refusing to serve in the Viet Nam War, according to the film’s director, Bill Siegel.

“I think that role was thrust upon him,” Siegel says of the three-time heavyweight champion. “He was discovering himself. He was becoming Muhammad Ali at that time. As a result of who he decided to become, the fact that he ended up in the crosshairs of the black freedom and anti-Viet Nam war struggles was a result of how he saw himself.”

“The Trials of Muhammad Ali” screens at 7:30 p.m. Sept. 12 at the Camelot Theatres in Palm Springs, and will begin a national release shortly after screening in Los Angeles on Sept. 27. Cathedral City product Tim Bradley, the reigning WBO Welterweight champion of the world, will introduce the film. Bradley is preparing for an Oct. 12 title defense bout against Juan Manuel Mårquez.

The event marks a coming home of sorts for Siegel, who received partial funding for the film from the inaugural American Documentary Film Festival in Palm Springs four years ago. Palm Springs Life is one of its sponsors.

Siegel will not be present for the Palm Springs screening, but he spoke about the film and AmDocs’ role. Did you face any resistance to doing the project because too much time had passed to revisit this time in Ali’s life?

"Not from Ali or his wife, Lonnie, or any of the people that I ultimately interviewed for the film, but definitely, yes, from potential funders. I got shut out a lot. Not because too much time had elapsed, but people felt, ‘Enough on Ali, already.’ Somehow in their head, every Ali story had been told. But from my mind, the most important Ali story about his years in exile had not been told extensively in documentary film. Fortunatel,y there were a few key people who did understand this. All documentary films are a struggle to fund; this one’s particular flavor was Ali fatigue."

What stood out about this part of Ali’s life that grabbed you?

"The film opens with talk show host David Susskind in 1968 taking Ali apart and then cuts to President George W. Bush giving Ali the Presidential Medal of Freedom in 2009. How did Ali go from villain in so many corners to hero in the White House is a journey that says as much about us as it does about Ali. It really had not been explored in a way that I felt was necessary."

In light of the 50th anniversary of the March on Washington, D.C. for Rev. Martin Luther King Jr.’s speech, did Ali follow what King was preaching?

"On the one hand, they were on the same side in opposing the Vietnam War. In the film, Ali says, ‘We’re all brothers’ as he puts his arm around Rev. King. But at the same time, I think they had different approaches. Ali at the height of his involvement with the Nation of Islam was preaching separation of the races, while Dr. King was preaching integration of the races. Certainly they had some differences, but in terms of oppression of racism they both experienced, they were on the same side."

Give me 3 things the audience can take away from the movie?

• "It depends on how much you know or thought you knew about Muhammad Ali going into the film. For many generations coming of age today, it may be discovery. Discovering a whole level or levels of Muhammad Ali that you never knew about. For those of us who lived through that time, it may be recovering your own emotions you had then, and asking yourself where are you now?"

• "Another is if the film is doing its job, it’s as much a story about Ali as it is about us. To come away asking yourself: What kind of moral stands are you willing to take that might involve the level of sacrifice at all akin to what Ali made? He gave up at the time what he thought was going to be his career, and the fame and fortune that comes with that on principle. That takes a lot of courage whether you agree or disagree where he stood."

• "Third, that it’s hard to recognize that we’re making history every day. It’s hard to know what the world is going to look like in 10 years. That makes it even more important for people to think now about what side they are on when it’s time to choose sides. The debate right now is hot and heated about whether or not to attack Syria. In 10 years when whatever happens is history, I think it’s important for people to consider now what side of history they want to be on so when they reach the crossroads of their life later, they are at peace with who they are in the world."

Why did you approach AmDocs for funding of this film?

"I came to AmDocs in the festival’s first year. There are very few documentary only film festivals. AmDocs was first of its kind on the West Coast, I believe. They had this unique opportunity at a level of financing but also an opportunity to see how the idea was received. They have this jury of three esteemed judges. Just getting accepted into that process was a thrill. And then to be one of the awardees was incredibly special. I am grateful to Teddy Grouya (AmDocs director) and to the festival for being one of the early supporters of the film. They got it."

Why are groups like AmDocs important to documentary film making?