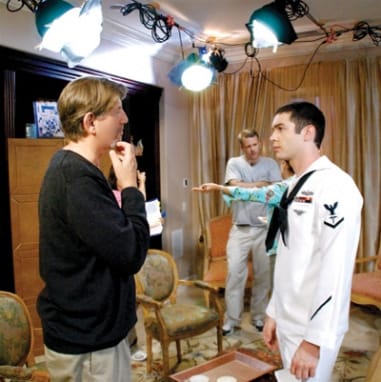 Adopt a Sailor is a dramedy about a dysfunctional New York couple who inadvertently “adopt” a sailor during Fleet Week. In the course of one long, unexpectedly lively evening, they find themselves changing in peculiar ways, thanks to the presence of the young sailor they are hosting. The film stars Bebe Neuwirth, Peter Coyote, and Ethan Peck (grandson of Gregory Peck). Producer Kim Waltrip lives in Palm Springs; and, although exteriors were shot in New York and aboard the USS Wasp, the rest of the film was shot locally.

American Primitive, based on a true story, is set in 1973, but is just as topical today. The film tells the story of a British widower who moves to Cape Cod to begin a new business and a new life where he can be accepted as a gay man, while struggling to keep that aspect of his life a secret from his two teenage daughters. James Egan of Palm Springs, who co-produced last year’s film festival entry Angels in the Dust, also co-produced this film.

Bart Got a Room is a coming-of-age comedy about a Jewish kid desperately trying to find a prom date. His search becomes progressively more pathetic once he and his family learn that Bart, the school’s biggest dweeb, not only secured a date for the prom, but also got a hotel room. William H. Macy and Cheryl Hines star as Danny’s newly divorced parents. One of the executive producers, Dina Burke, and one of the producers, Tony Shawkat, are local residents.

Cat City, a film noir thriller set amid the trappings of wealth and the high life in Palm Springs, makes use of sun-drenched local backdrops to spin its tale of infidelity, deceit, greed, and murder in the world of developers and high finance. The title refers to a planned casino development in Cathedral City. Sgt. Mitch Spike from the Palm Springs Police Department and Frank Cullen from U.S. Rep. Mary Bono Mack’s office have parts in the film.

The Inheritance of War is a documentary about thousands of World War II solders held as prisoners of war in the Philippines after one of the worst military defeats in U.S. history. They were subjected to the infamous “death march” across the Bataan Peninsula, then sent to Japan to serve as slave laborers for Japanese corporations. Fifty-five years later, the survivors filed a class-action suit, seeking justice and retribution. Among the lawyers representing them was James Parkinson of Palm Desert, who produced the film and who now carries their story to high schools across America.

Nerdcore Rising follows MC Frontalot on his first national tour with his band, unveiling the roots of their musical genre, the dorky complexities of its artists, and MC’s fight for nerd stardom despite obstacles thrown in his path. The fresh and funny film was a big hit at the South by Southwest Film Festival. Director/Executive Producer Negin Farsad grew up in Palm Springs and is a Palm Springs High School alumnus.

No Subtitles Necessary: Laszlo & Vilmos is a documentary about renowned cinematographers Laszlo Kovaks and Vilmos Szigmond, who fled their homeland after filming the 1956 Soviet invasion during the Hungarian Revolution. They landed in Hollywood, where they gained fame shooting a number of key films, including Easy Rider, McCabe & Mrs. Miller, Five Easy Pieces, Close Encounters of the Third Kind, Paper Moon, and The Deer Hunter. The executive producer is local pathologist and film buff David Kaminsky.