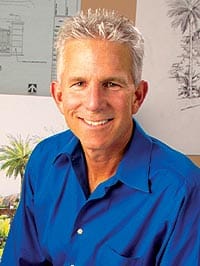 With luxury homes being built seemingly overnight in Palm Desert and La Quinta, it seems natural that Indian Wells would get a little jealous. It’s tough being the middle child between two prosperous siblings — never mind that this middle child has a higher per capita income and lower crime rate than its siblings, and an internationally known tennis tournament — but don’t start calling Indian Wells “Jan Brady” just yet, especially not with the gleaming jewel being unearthed nearby: Montelena, a gated community spanning 24 acres and featuring 71 homes on the corner of Highway 111 and Eldorado Drive, adjacent to Miramonte Resort.

Built within the confines of the former (and historic) Indian Wells date grove — the trees originally were slated to be reintegrated into the development’s landscaping until arborists determined they’d reached the natural end of their lifespan — Montelena offers a refreshing take on resort living: Each homeowner will enjoy Miramonte’s many amenities, including full housekeeping, concierge, and room service. With homes beginning in the low $600,000s and floor plans ranging from 2,400 to 3,400 square feet, developers envision a community of both permanent and seasonal residents ready to live a first-class life — a prospect that excites Indian Wells Mayor Mary T. Roche.

“Our general plan calls for a resort-residential community — a residential community that has a resort element, which is our industry,” Roche says. “It has made us a very strong city. Indian Wells is a prestigious address and people want to live here, so we have a great need for additional housing.”

With only slightly more than 4,300 single- and multifamily homes in the city, Montelena’s development represents a dramatic upswing in production for Indian Wells. In 2002, for instance, Indian Wells saw only 32 new homes built, a fact not lost on architect Michael Kiner, whose eponymous design firm — along with Gerald Fogelson and contractor TransWest Housing — has been charged with creating Montelena’s distinct Tuscan, French Provencal, and Northern European homes. “It was important to us that this project be of a high quality so that it would be consistent with the standards of Indian Wells,” Kiner says. “From the overall design of the homes, to the fact that the property is fairly low density, to the 115 new date palm trees we’re importing, we’ve tried to create a metaphorical relationship to the history of the city.”

Preserving the legacy of the area is an ideal close to Kiner’s heart. A lifelong valley resident, he remembers when much of the surrounding land was little more than scrub desert. Times have changed, certainly, and the connection between Montelena and Miramonte represents an interesting alternative to contemporary country club living — a middle ground between the residential and the commercial that fits perfectly with the city’s demographics. “The relationship with the hotel affords us something unique,” Kiner says. “It gives a homeowner the opportunity to have a restaurant, or have a bar, or a have a spa right at their fingertips.”

This vision has caught on quickly: The first phase of Montelena, scheduled for completion in November, has already sold out — remarkable when you consider that the first model homes will not be completed until late July, meaning buyers are betting on floor plans and the priceless nature of an Indian Wells address.

“People come to Indian Wells for the quality of life, period,” Roche says. “The name stands for something, for a lifestyle, and people want that.” With land at a premium, Montelena is one of the final developments that will bear that lofty signature. This makes its location directly across the street from Indian Wells City Hall an emblematic one: The very foundation from which Indian Wells wishes to be viewed can be sampled a mere crosswalk away.

Challenges still abound for Indian Wells, City Manager Greg Johnson concedes. “Transportation, increased traffic, noise, how we’ll mitigate our growth — these are all things to think about looking forward,” he says. If the city’s exuberance for Montelena is any indication, these are issues that can be dealt with in due course while keeping pace with the city’s distinctive vision.

Kiner understands how important that is. “We wanted to do a valuable project with a real identity,” he says. “It’s not going to be cookie cutter by any means. For the city of Indian Wells must be the best.”