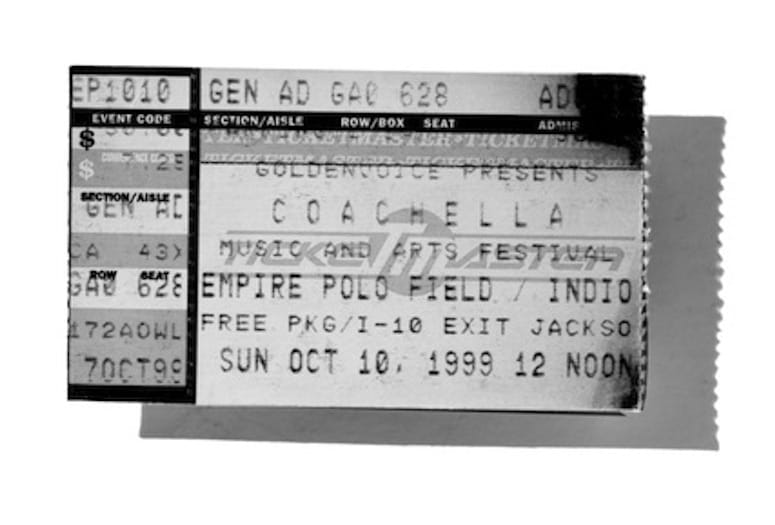 What can I say about the first Coachella Valley Music and Arts Festival? The vibe was mellow, friendly, and amazing … and most of it was a  total blur.

I’m talking about the inaugural two-day event in October 1999 (not the epic Pearl Jam concert that took place at the Empire Polo Club in ’93, which some mistakenly refer to as the first Coachella). To have 70-plus bands and DJs playing at the polo grounds in my hometown of Indio was exciting to say the least, and the fact that tickets were a mere $50 per day made it even better. (Compare that to the $429 it now costs for admission to a three-day weekend.)

The headliners for Saturday were Beck, the Chemical Brothers, and Morrissey, while Sunday was Rage Against the Machine, Tool, and Ben Harper. I chose to go Sunday — I was fired up to see Rage, as well as Moby, Thievery Corporation, DJ Shadow, GusGus, and Tool.

The setup was pretty much the same as it is now but on a much smaller scale. There were the main stage, second stage, and three rave tents: Mojave, Gobi, and Sahara. The crowd was friendly and generally well-behaved. Of course, a few hooligans attempted to start little fires, but once the surrounding crowd took notice, they immediately dumped their drinks on the flames and extinguished them — nobody wanted the type of chaos that had occurred at Woodstock ’99 to take place at Coachella.

There was artwork, too, but not the outrageous sculptures you see now — they were smaller creations, recycled from Burning Man. But I didn’t pay much attention. My mind was intently focused on checking when and where the next band would be playing.

Attendance that year was 17,000 on Saturday and 20,000 on Sunday. Since then, Coachella has become an annual two-weekend behemoth, with average daily attendance last year of 125,000 and a record-breaking gross of $114 million. And aside from one year when I was sick, I’ve been to every one of them.