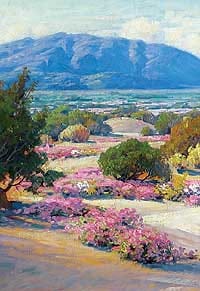 With its quick, bright strokes of color, plein air, or painting outdoors, rode the popularity of the early-1900s’ peak of Impressionism and remains one of the most enduring styles in art history — one that, in the United States, drew the biggest names of Impressionism to the coasts, deserts, and mountains of the Golden State.

As soon as railroads tracked through the Coachella Valley, operators allowed artists to ride in exchange for paintings they made of scenery at various stopping points — pictures of Western landscapes that the railroads would use to entice more travelers to explore life beyond the Mississippi River.

Plein air, French for “open air,” was hardly new to these artists; many of them, including Americans, brought the style from places like Giverny. Indeed, the roots of plein air trace to mid-1860s’ Europe and lead to the United States, where it became one of the key styles to explore desert aesthetics. Paul Grimm, Agnes Pelton, Clarence Hinkle, and several others rode the popularity of Impressionism in the early 20th century and became plein air classicists.

The style began with the French Impressionist movement in the late 1800s, when artists took their easels to the countryside to capture the ever-changing light and moods of nature. Today, painting clubs and societies throughout the world converge on natural settings, sustaining the tradition.

In Southern California, artists of the 1900s — including Grimm, John Frost, and Gordon Coutts — built studios in the Coachella Valley after being drawn by its landscape and spectacular seasonal events, such as blooming springtime wildflowers. They hoped to draw inspiration from the scenery and moods and tap the region’s regenerative qualities, its clean air helping placate their tuberculosis, an epidemic du jour.

“I think John Frost was one of the earliest to come,” Giannetto says. “Frost was determined to find French beauty in the dry, arid no man’s land, far from the lilting meadows and valleys of the inland territories in France and Pasadena.”

However, Giannetto notes, the proliferation of conceptual and abstract art from the late-1930s to mid-1960s eclipsed plein air in popularity, though the genre has since enjoyed a resurgence — a new generation of enthusiasts — with the rest of the art market in the past three years.

Historians, scholars, collectors, and museum curators infused the new appreciation of California Impressionism in the 1960s. “Traditional painting had fallen through the cracks with the advent of the moderns, especially after World War II,” Giannetto says, suggesting that the depth and technique of plein air again won the artists acclaim. “It took a good 50 years after the vitality of the original movement for people to realize the importance of what once was. The old plein air painters were reassessed and looked at with a fresh eye. People liked them, and a large part of the collecting population was simply tired of looking at all that modern stuff that wasn’t really art, just shtick, craft, talentless blobs of nothing. There was a hunger for reality in its shocking normalcy.

“Everyone loves the old guard Impressionists,” he continues. “Young, old, and in-between revel in the historic landscapes, in scenes of California as it used to be. There is a great cachet in the old, the rare, the antique, the collectible. Appreciation of the plein air artists transcends all walks of life, age groups, religions, etc. Impressionist art is the great leveler of humanity, embracing the good, bad, and the ugly, the vintage, the classic, and the current decorative movements. As we digest the last 100 years, only the great will survive the test of time.”

The new generation of plein air artists views the style and the market from a gallery perspective. “[They are] painting the desert but sort of limiting their artistic visits to the wildflower seasons,” he says. “It was past generations that really explored her in all of her moods, including the dry gulch mood.

“Largely what we are seeing today is living artists cashing in, coming out of the closet, and painting like the old masters did,” he continues. “They are making a living as copyists. The prices are cheap compared with the prices of the historic painters. This new work is made largely for decoration and for those who cannot afford to collect the masters. The new movement is vital, but emasculated and very derivative.”

In the Coachella Valley, plein air artists and enthusiasts enjoy the annual Desert Plein Air festival, though the event was canceled for 2005. The festival began in 1999 with 31 artists and has since evolved to show about 50 artists. First-year sales tallied $800,000 for works by the likes of William Scott Jennings, Michael Obermeyer, John Cosby, Charles Muench, and Niles Nordquist.

Nowadays, the festival serves as a focal point for newcomers to the genre, where creators and buyers engage and network. La Quinta Arts Foundation Executive Director Christi Salamone says the festival has introduced artists from all over the country to the Coachella Valley.

“Some artists have even relocated to the Coachella Valley as a result — Mehdi Fallahian, for example, a gallery owner on Palm Canyon [Drive in Palm Springs]. Many artists have made friends with the patrons introduced to them at the Desert Plein Air festival, who have offered housing [that] allows them to return often to paint the valley at their leisure.”

Salamone says artists in her network have noticed big changes in the valley since the inaugural festival.

“Many of the usual haunts where they liked to paint — date groves, produce packing sheds, corner fruit stands, and ethnic markets — have disappeared, yet there are still many areas and much subject matter to paint. They love the diversity here, historical sites, majestic vistas, agriculture, geology, action, and people places like downtown Palm Springs.”

In terms of the genre’s undulating popularity, Salamone believes the plein air movement represents something for all audiences. “There is definitely cross-generational interest” she says. “Plein air landscapes are one of the best sources of historical recording of an area in a certain time, so appealing to historians and academics. More and more young people — those concerned with environmental issues — appreciate the art form as well.”

“Plein air artists have the opportunity of engaging the patron, often because they happen upon them in the midst of creation. The ability to meet, learn, and discover ‘the artist,’ ‘the man/woman,’ is the special aspect of plein air work. Anyone can go to a gallery. You want to see the action, meet the person, and learn about his or her inspiration and experiences.”