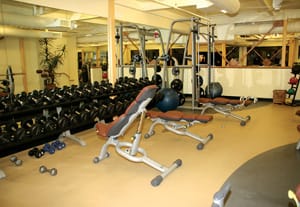 Mission Hills Country Club members have a stunning new place to stay fit: the luxurious, 16,000-square-foot Spa & Sports Center at the Tennis Clubhouse. The state-of-the-art exercise equipment includes a free-weight room, group exercise studio, and the first Kinesis studio in the Coachella Valley — all with picturesque views of the rolling fairways. Members and their guests also enjoy classes in yoga, aerobics, step, body-sculpts, and Pilates, as well as a full-service spa and salon with a range of treatments that includes massage, skin care, hair styling, manicures, and pedicures. For a casual snack or meal, the café serves up healthy sandwiches, salads, and smoothies.
— Elizabeth Schmitt

Lorrie Agnew strikes the brush with a pole as he walks through the High Desert, while his German shorthaired pointer, Cage, runs in a larger circle. Both are trying to flush out rabbits. Agnew stops, holds up his hand, and calls, “Here, Skippy.”

A hawk swoops down from a Joshua tree and lands on Agnew’s hand.

“He answers better than my dog,” Agnew points out. Read More

Today’s pool buyer wants more than a concrete-lined hole filled with water. “People want water features and stacked stone, floating spas, reef steps, and infinity edges,” says Gary Minor, vice president of operations for California Pools. “Pools really have to be custom today.” He should know. His company has built 60,000 pools nationally and about 6,000 pools in the Coachella Valley since opening here 20 years ago. Read More Susan Benay, who owned a Palm Desert art gallery in the mid-’90s, and Patrick Janow, a former local writer and tennis coordinator at country clubs, have made a real impression in Hawaii. Benay has turned her artistic eye to photography, while Janow markets their Lanikai Sugar Co., a wholesale distributor of matted photographs of Hawaii. Benay sells her photos in more than 50 retail stores on the islands, aboard NCL America cruise ships, and at lanikaisugarco.com. The couple plans to expand their business to the continental U.S. West Coast.

When PBS journalist Jim Lehrer canceled a local appearance to remain in Washington D.C. for the release of the Iraq Study Group report in December, NewsHour with Jim Lehrer Special Correspondent Judy Woodruff filled in at the private Thunderbird Heights home reception to benefit KCET Desert Cities, the local PBS affiliate. After KCET President and CEO Al Jerome introduced her by saying she had won 1,347,000 awards (“I counted”) and synopsizing her career of three decades at CNN, NBC, and PBS, Woodruff joked, “One of these days, I’ll learn how to hold down a job.”
A Perennial Winner Born on the day of the 75th Kentucky Derby, Deborah Butterfield found her calling in creating sculptures of horses. The larger-than-life Ryuanji (2006), in the permanent collection of Palm Springs Art Museum, has garnered more attention than the smaller, stick-and-mud horse she made in the 1970s that has been exhibited in the museum’s Best of the West gallery. The new sculpture in the atrium — donated by David Kaplan and Glenn Ostergaard — is bronze and finished to look like driftwood. The striated lines reminded Butterfield of the lines raked in zen gardens and thus named the work after a zen rock garden in Kyoto, Japan.