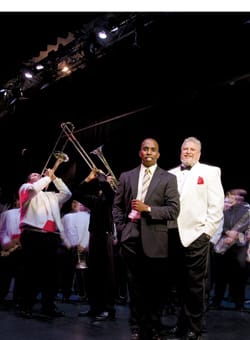 The Band Plays On

About 180 students play cultural ambassadors for the Coachella Valley this year, with financial support coming from Palm Springs Friends of Philharmonic. The nonprofit group donated $25,000 to each of the Cathedral City and Palm Springs high school bands to pay for their prestigious appearances.

Sixty students from the Cathedral City High School Symphonic Band will be the only performers on the bill at Carnegie Hall on April 28. The band was selected based on an audition CD by a panel of adjudicators who felt the students played at a caliber worthy of the famed concert venue.

“We are in the minority among bands in this state and nationwide to get to play at Carnegie Hall this year,” says Director of Bands Gregory Whitmore. As part of that trip to New York, the band will perform at White Plains High School and work with band directors from Syracuse University Orchestra, Juilliard School, University of Texas, and Ohio State University.

Taking into account the school marching band’s participation in the Rose Bowl and the jazz band’s at Disneyland, Whitmore points out that this year his student musicians are transcontinental.

In July, 118 members of the Spirit of the Bands travel to China to perform at the Beijing Music Olympics. Olympics representatives heard the Palm Springs High School band at the Sydney Opera House in Australia and invited Director of Bands Brian Ingelson to bring his student musicians to Beijing.

“We were the first American band to be invited,” Ingelson says. The band will play six concerts from Shanghai to Beijing, including a live TV performance broadcast to more than a billion people. The symphonic band is also participating as a marching band; joining them are the school’s jazz band and visual (flag, dance, and baton) corps.

The Friends traditionally give scholarships to local students, and this year the board voted to donate $50,000 to help fund these trips, which run $2,250 to $2,500 per student. “We felt that it was such a wonderful thing that these kids are doing,” says President Hannah Schneider. “We wanted to support them in order for them to reach new goals. It’s our intention to try to help in any way we can to foster music and to assist young people in their pursuit of musical activity.”

“I can’t say enough wonderful things about [the Friends],” says a grateful Ingelson. Instead of a power lunch, some businessmen prefer a trip to the dermatologist for quick, noninvasive treatments such as Botox, fillers, and firmers.

“They come first for hair removal and proceed from there,” says Joann Foxx, who assists her husband, Dr. Richard Foxx, at The Medical and Skin Spa at Hyatt Grand Champions Resort in Indian Wells. “They are businessmen who feel they are losing their ‘edge.’ Our business [among men] has gone from 0 to 20 percent over the last five years.”

Their male clients range from 45 to 60 years of age and come from all over the world. Regardless of gender, “skin reflects age, stress, and health,” Foxx says. Botox is his most common lunch-hour procedure.

“It’s possible to lose collagen on the left side of your face from the sun while driving, and it’s noticed,” Dr. Mark Sofonio of Rancho Mirage points out. Businessmen often find themselves driving during the day to meetings or luncheons. “My business is now 40 percent male,” says Sofonio, who recommends the filler Restylane.

Dr. Timothy Jochen of Palm Springs suggests a skin bleach to get rid of brown spots and also offers a silicone filler that has been approved by the FDA only for HIV patients.
“My male clients range from 25 to 80 and are 50 percent of my business,” Jochen says.
In something akin to the real-men-eat-quiche principle, masculinity no longer appears to be threatened in seeking help with one’s skin.

“I felt more comfortable about going to a dermatologist after seeing ads everywhere. I wasn’t as self-conscious,” says one male patient. “The laser felt like the time I put 50 staples in my face,” the 55-year-old jokes. “But I had many, many compliments on my complexion, and no one knew I had it done.” Ned Redway
Caption: In her 12th season with The Fabulous Palm Springs Follies, Dorothy Kloss exemplifies the spirit of retaining a youthful outlook on life.

She’s 83 years old, and all she wants to do is dance, dance, dance! In fact, The Fabulous Palm Springs Follies audience members gasp when cast member Dorothy Kloss announces her age. She and the other Follies performers — mostly in their 60s and 70s — provide living proof that age is in one’s head.

That’s a message Dr. Gary Small, director of the UCLA Center on Aging, promotes on television and in his best sellers: The Longevity Bible, The Memory Bible, and The Memory Prescription.

On May 4, the Follies and UCLA Center on Aging present a symposium titled Living Better Longer.

Scientific American magazine has named Small one of the world’s top 50 innovators in science and technology. Guinness World Records has named Kloss the World’s Oldest Still-Performing Showgirl (she has been dancing for 80 of her 83 years). They will be joined in a panel discussion by other Follies cast members, who will reveal how they stay fit to dance and sing their way through nine three-hour shows a week, seven months a year.

Leading the charge is Follies Producer Riff Markowitz, who at age 68 has presided over 3,400 performances without missing a show (perhaps it’s something in the water at the Historic Plaza Theatre, where the symposium takes place). Camera technology allows anyone to point, shoot, and get an in-focus print. But that doesn’t make us all Ansel Adams. Those who aspire to such heights, however, may find guidance at the second annual Palm Springs Photo Festival, May 6-11.

“Everybody now can take pictures and they will come out,” says festival Creative Director Jeff Dunas. “The big question in the past was ‘Will it come out?’ We are now talking about more important things like content. Content is what separates photographers from picture-takers.”

Dunas — whose own work is on exhibit at The Getty Museum, The George Eastman House, and other public venues — says the festival assembles advanced amateur and professional photographers with art directors, magazine editors, curators, master photographers, and industry professionals. After living in Paris and attending numerous European photo festivals, Dunas was inspired to create a Palm Springs version after visiting Korakia Pensione. Viewing the Moroccan-styled inn as an ideal setting for such an event, he teamed with Hossein Farmani, founder of the Lucie Awards, to present a festival last March. This year’s event includes the following:

Symposiums on photojournalism, the photo business, silver versus digital;

An opening night reception and Fine Art Print Walk from 3 to 6 p.m. featuring more than 20 important photographers (including Eikoh Hosoe, Jock Sturges, and Robert Glenn Ketchum) with prints for sale.

Additionally, those registered for the festival may have their portfolios reviewed by industry insiders. Tickets are available individually for workshops, symposiums, and the print walk. A 40-foot waterfall cascades down what was level terrain in Indio only a year ago. The Cabazon Band of Mission Indians dug and mounded a half-million cubic yards of earth to create the new 140-acre Eagle Falls Golf Course at the tribe’s Fantasy Springs Resort Casino.

“We were looking for something to set it apart from other golf courses, and water features are part of Clive Clark’s design work,” says Director of Planning and Development Stephen Thomas. Clark also designed a private course at The Hideaway in La Quinta.

Grading for Eagle Falls began Feb. 9, 2006; at press time, the course was scheduled to open to the public on March 15. While shifting onsite dirt created undulating terrain, the tribe imported 500 to 600 tons of stone for dry-stacked walls that “look like they have been there forever,” Thomas says.

The waterfall cascades down a rock face 25 feet wide. “It’s designed to look like a natural sandstone outcropping,” Thomas says. Water emerges at three levels. Two falls mix together halfway down the rock face as they fall into a collection pond, which then cascades down to the cart path at the 18th hole.

On top of the hill built for the waterfall lies the 10th hole, where another water feature resembles a natural spring flowing into a whitewater stream that spills into a lake in front of the first-hole tee boxes. Smaller waterfalls can be found at the 16th hole.

“You’re going to get a public golf experience I don’t think you are going to find anywhere else in the desert,” says Director of Golf Operations Willie Maples. Fantasy Springs even offers something private clubs and other casinos don’t.

“There are some casinos that own golf courses,” Maples says, mentioning Trump and Harrah’s as examples. “Typically, those golf courses are located quite a ways from the casino itself.”