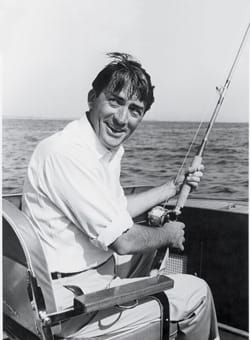 Looking Back
With more than 60 years of photographs from which to choose, Bill Kobrin of Indio had plenty of material for a coffee table book. The result is exactly that: a 10×14-inch volume of black-and-white photographs of celebrities — on- and offstage, portraits and candid shots — that includes Marilyn Monroe, Sammy Davis Jr., Cary Grant, and Sophia Loren.

Kobrin’s own story reads like a Hollywood screenplay. He began his career in 1941 as a messenger working the graveyard shift for The Associated Press in New York City. He purchased a 4×5 Speed Graphic camera and awaited his big break. It came the following year when he was the only one available to shoot the Harlem riots. After serving as a Korean War correspondent, Kobrin signed on as a contributing photographer for Look magazine and then became the East Coast representative for 20th Century Fox Films. He later worked as director of photography for The Polly Bergen TV Variety Show. In 1958, Kobrin moved to California, where his experience gained him entrée into the Hollywood scene. CBS hired him as director of visual communication. He subsequently worked for ABC, during which time he served 10 years as director of photography for the Academy and Emmy awards, and for Fox. Backstage photographs from the awards shows are included in the book. The Kobrin Collection is available from the publisher, A+ Printing, 45-110 Oasis St., Indio, 342-1537. — Janice Kleinschmidt