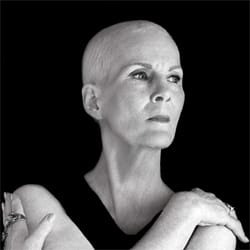 A new pictorial book challenges our perception of what cancer looks like. Turning Heads: Portraits of Grace, Inspiration, and Possibilities (Press on Regardless, 2006) features beautiful images of women — from 28 to 76 years of age — who have lost their hair from chemotherapy. Local photographers Michael Childers and Ethan Kaminsky join the impressive list of 59 contributors who donated their time. They include such prominent photographers as Eddie Adams, David Hume Kennerly, Elinor Carucci, Howard Schatz, Gerd Ludwig, Greg Gorman, and Catherine Opie.

The pictures — accompanied by quotes from the subjects — range from austere black-and-white
portraits to a commercial designer wearing a shiny magenta gown and gloves sitting on an elephant. They include a bride and her matron of honor/ sister, both of whom were diagnosed with cancer after wedding plans had begun. Childers photographed artist Pam Clerihan, and Kaminky photographed “Harley rider” Pam Bertino.

The photographers’ section of the book includes their brief biographies and quotes from them on the women they photographed.

Editor Jackson Hunsicker, a two-time cancer survivor, points out in the book’s foreword that 662,000 women get some form of cancer each year, and a majority of them lose their hair while undergoing treatment. She recalls her own experience after being diagnosed with Stage Two breast cancer.

Hunsicker now believes people fighting cancer should not be ashamed of the way they look. “We should feel like who we are: beautiful in a different way,” she says.

Turning Heads is available at major bookstores and on Amazon.com.
— J.K.