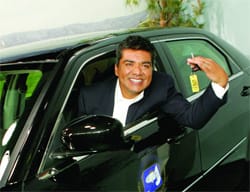 When the folks at Chrysler offer a token of appreciation, they don’t mess around. After announcing that George Lopez would host the 48th Bob Hope Chrysler Classic golf tournament in January, the car manufacturer presented the comedian/actor with a limited-production, high-performance 2007 300C SRT8 (manufacturer’s suggested retail price $43,400, though we’re told it was loaded with all the options).

Chrysler presented the car to Lopez on the Warner Bros. Studios set of his ABC series, George Lopez. But a desert golf course and mountain backdrop was used for the photo op (note the reflection of a palm tree on the front fender and door in the accompanying photo).

An avid golfer, Lopez has played for the last three years in the Bob Hope Chrysler Classic. His team tied for 16th place in a field of 128 this year.

Chrysler has sponsored the Bob Hope Chrysler Classic since 1965 and been the title sponsor since 1986. The tournament has raised more than $42 million for local charities. The 2007 event will be played Jan. 14-21.