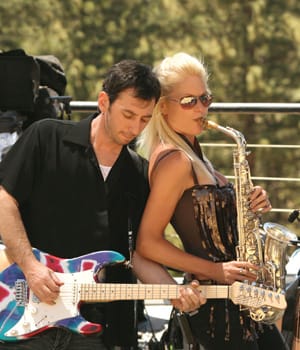 In the last couple of hours of last year’s arts festival, organizer Dianne Funk was helping pack up the souvenir booth when Good walked up and started buying one of everything. They struck up a conversation and Funk said, “I want you to take a walk with me.”

“I took him around the venue, because I have been planning to have a music element for quite a few years,” she says. Good liked what he saw, particularly in the tennis courts.

Good’s reputation guarantees to bring the arts festival publicity and attendance well beyond the Coachella Valley. His weekly, five-hour radio show not only is syndicated nationally, but also is streamed online to an international audience. “You meet people from all over the world at JazzTrax festivals,” says Good, who also has produced jazz cruises and multiple-artist Christmas concert tours. His JazzTrax Desert Festival, however, is his first music event in association with an arts event. “I almost consider the [arts] festival my lead-on act.”

Also new to this year’s arts festival: a rock sculpture demonstration by David Falossi; a display of paintings incorporating Braille created to be touched by Judith Lepuschitz, who is donating a painting for silent auction to benefit Guide Dogs of the Desert and the Braille Institute (sponsored by Palm Springs Life); and a free chance to win a golf car donated by Fairway Golf Cars and painted by Snake Jagger.