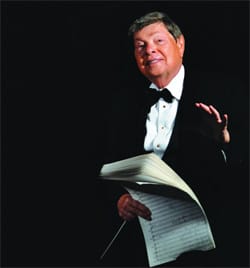 At a time when his peers have settled into retirement, Will Schaefer quietly positions himself to become the desert’s “next big thing.” Last year, the 77-year-old conductor, arranger, and composer founded the Desert Cities Pops Band, a 45-member concert band boasting a talented lineup of musicians ranging in age from 17 to 80. Veterans of the big band era serve as mentors to younger musicians. “They do get along,” Schaefer says. “You wouldn’t believe it.”

The band’s repertoire covers everything from Strauss waltzes to big band, Americana, movie and television themes, contemporary songs, and Schaefer’s original work. “I love the desert and wanted to bring this type of entertainment back at a local level,” says Schaefer, whose performances routinely garner standing ovations.

No stranger to the spotlight, the Emmy and Pulitzer prize-nominated musician relocated from Los Angeles to Palm Desert nearly 14 years ago. But unlike many septuagenarians who reside here, Schaefer forgoes the golf course and country club crowd to devote more time to his singular passion: making music. “When you love something this much, there’s no reason to stop,” he says, In classic rags-to-riches fashion, the Wisconsin native launched his music career in the early 1950s, arriving in the Big Apple with a dream and a little more than $300 in his pocket. “Those were lean years,” he recalls. “I could only afford to eat five days out of seven, but I stuck it out. In my heart, I really believed I had what it took to make it.”

Schaefer initially made a name for himself composing TV commercials. Later, he landed a coveted position with The Walt Disney Co., creating scores for the popular Wonderful World of Disney television show. Other resume highlights include scores for The Flintstones, The Jetsons, and Scooby-Doo; arrangements for Count Basie, Buddy Rich, and more than a dozen Broadway musicals; developing the curriculum for USC’s Film Scoring Program; and a recent trip Budapest to record with the Budapest Symphony Orchestra.

With a schedule and work ethic that put musicians half his age to shame, Schaefer also is working on a film-scoring course book he plans to license to universities based on his 10 years with USC. But most days, you’ll find him eagerly preparing for his band’s upcoming performances (including Dec. 15 at Cathedral City High School and July 4, 2007, at Sun City Palm Desert). Schaefer pursues this endeavor with characteristic childlike enthusiasm.

“Writing for a live orchestra these days makes you a bit of a dinosaur — which I guess I am,” he says, laughing. “But for heart-stopping excitement, you can’t beat an orchestra performance.”