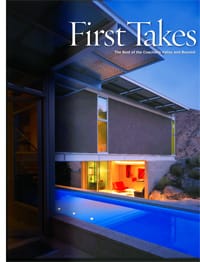 Palm Springs architect Ana Escalante almost missed being included in New Blood: Next Gen — an exhibit running through Aug. 18 at Architecture + Design Museum in Los Angeles. She received the letter inviting her to participate in the exhibition a month after it was mailed. And even then she almost didn’t open the envelope because she thought it was junk mail.

Escalante says that the museum originally intended to feature 101 cutting-edge architects, but after sending out representatives to look at their work, narrowed the exhibition to 40.

Escalante’s design philosophy is "to describe the desert as a unique place," and she believes good architects "don’t repeat the same trick over and over again."

New Blood: Next Gen opened in conjunction with the American Institute of Architects’ 2006 convention and marked the opening of the Architecture + Design Museum’s new location at 5900 Wilshire Blvd., across the street from the Los Angeles County Museum of Art. Escalante is displaying videos, photographs, and plans of the Zoll and Greenbaum residences in Rancho Mirage and Linsky-Palmas and Romero residences in Palm Springs. Her other projects include adaptive reuse of the former William Cody-designed convent at St. Theresa Parish into a preschool and Contempo Homes’ energy efficient Royal Palm Estates.

A graduate of California State Polytechnic University, Escalante lectures and writes about a technology-derived aesthetic, critical theory, and architectural science.

Sculptural Explorations in Metal & Wood, a thoughtfully installed exhibition of works by heavy-hitters such as Isamu Noguchi, Sir Anthony Caro, Louise Nevelson, Sorel Etrog, and Richard Hunt, could rightfully be viewed as Palm Springs Art Museum’s latest cry for help: It has many A-list names — and some you should know — but few exemplary specimens of their works.

So goes the museum’s permanent collection, from which this show’s curator, Marilyn Cooper, cherry-picked 37 pieces by 29 artists. She made a bold selection that considers the "visual relationships and uneasy tensions that arise when works of art, similar in subject matter or materials, are intentionally juxtaposed in ways that may reveal different interpretations."

Spotty in content, the show relies heavily on the dynamic interplay of the sculptures. That’s not to say the exhibition lacks quality. From the entryway, viewers will find treasures, such as Etrog’s Sunbird II (1960-1962), representative of the pivotal moment in the artist’s career: when he mastered the relationship between the mass and weight of his construction and its base. He integrated a wheel-like element in the bottom of the construction, giving a weightless appearance, as if it had no base at all. It’s one of two Etrog entries in the exhibition.

Works by Hunt and Melvin Schuler inspired Cooper’s concept for Breaking Out! "Schuler’s carved, organic forms took on metaphorical meaning as they appeared to ‘break out’ from the constraints of defined space predetermined by the rigid, rectilinear steel frame at its core," Cooper says. "I observed this action as well in Hunt’s The Farmer’s Dream. In this work, it wasn’t the steel barrier, but the solid, pyramidal form itself that constrained the undeveloped form within. Part of the form leaves its original source and appears to morph into something undefined and free. I loved this realization because it tied in with the creative possibilities that artists explore while taking risks and venturing into uncharted territories."

Austen (1965), the green-painted steel sculpture by living legend Caro, might excite minimalists, but it hardly represents the vast conglomeration of metal forms that gained him international rock-star status. Austen was easily missed while installed in the museum’s sculpture garden. "I thought it would be interesting to place it in a new context, on a low pedestal instead of directly on the ground," Cooper says. "This new presentation raises questions as to its importance and, in turn, gives it visual importance so it doesn’t get lost among the stronger works."

Likewise, Noguchi’s Tetsubin (1961), a square vessel with a rich surface, would do just fine in most private collections. But in a museum in Palm Springs, where Noguchi is something of a deity figure, the piece, like so many others in the show — including the untitled Nevelson assemblage from 1976 — leaves you looking for a better representation.

Walk on the Wild Side

The local tour business has gone wild. Elite Land Tours of Palm Springs has added to its adventurous outings a visit to an exotic cat preserve a little more than an hour’s drive in Elite’s luxury Hummer H2s.

Safari Trax provides an interactive experience like no other. Guests can get close enough to get a "tiger kiss" and spray the big cats during "tiger splash" (one of the animals’ favorite recreations). The tour also includes a gourmet lunch while watching the cats run free in an open range and learning about the wild cats from preserve founder Kele Younger.

Younger began working with big cats as a runway model and subsequently developed an illusion show during which she made her leopard, Kattaka, disappear. Learning the ropes from a friend who ran a preserve in Florida, Younger became a skilled trainer who also wanted to provide a loving home for large cats that had been abandoned or abused.

Younger’s family includes leopards, tigers, and cougars (as well as two dogs who don’t seem to mind sharing "mom" with felines much larger than them). The cats are accustomed to the limelight. Siberian tigers Mischa and Sasha appeared on an episode of last season’s new TV show The Loop, while leopards Kattaka, Nileca, and Asiaca appeared in photo shoots for Glamour and Elle magazines.

The Safari Trax tour helps Younger provide food and shelter for the cats (who all have healthy appetites!) and allows Elite Tours to offer an intimate experience with exotic animals without traveling to Africa. The nonprofit preserve is not open to the public, so Elite Tours is the only ticket to enter.

Art + industry, a new gallery of modern art and design in Palm Springs, features furnishings perfect for midcentury modern interiors. Vintage and new acrylic designs by Charles Hollis Jones include a table that was part of the Will & Grace set. When that popular TV series ended its run in May, Jones brought the table to the gallery at 115 S. Palm Canyon Drive. Art + industry principal Robert Lumerman, who met Jones at the Beat Hotel in Desert Hot Springs (one of Jones’ favored haunts), says the iconic designer visits the gallery weekly.

Art + industry also features kitchen tools and tableware designed by Ole Jensen to unite form and function and turn work into play. In addition to paintings, the gallery exhibits photographs, including vintage images of the Elrod House

Lumerman’s business partner, David Shearer, who previously ran a furniture and art gallery in New York, produced the documentary Desert Utopia: Mid-Century Architecture in Palm Springs. Trained as an architect, he has curated and produced exhibitions focusing on the decorative arts and design of such luminaries as Frank Lloyd Wright, Charles and Ray Eames, and Isamu Noguchi.

Lumerman, also from New York, has a background in entertainment and nightlife. He and Shearer both live in midcentury modern residences. Their plan at art + industry is to offer architecture lectures, as well as exhibitions of art "that we could see in a midcentury home," Lumerman says.

Albert Alexandre Louis Pierre Grimaldi, sovereign prince of Monaco, has confirmed he fathered the 14-year-old daughter of an Ironwood Country Club resident. Jazmin Grace Rotolo’s birth certificate lists Albert as the father, but Albert’s concession came more than 13 years after her mother filed a paternity case against Prince Albert II. Jazmin Grace, an honor student at St. Margaret’s Episcopal Church and School, could receive a share of the prince’s $2 billion.