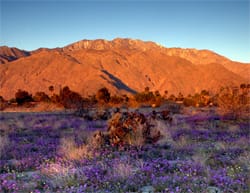 Long a favorite topic of conversation among those who don’t really know each other, weather brought together 15 people from as far away as Canada for dinner at LG’s Steakhouse in Palm Springs.

Until Oct. 13, the diners had not met in person. However, they frequented the same place: www.psview.com, a local weather Web site that attracts 2.1 million visitors a month. There, in a chat forum, David Clarish of Yakima, Wash., proposed an annual dinner in Palm Springs. Forum frequenters from Lebanon, Pa.; Nova Scotia, Canada; and Encino and Winnetka, Calif., jumped on the bandwagon.

Lance Conway, owner of Viper Logic in Palm Springs, started psview.com in Sept. 1999. “I have friends in Orange County that always wanted to know the weather [here]. So I said, ‘I’m going to put it up on the Internet so I don’t have to tell you about it every day,” he recalls. He installed a weather station at his office at Palm Canyon Drive and Mesquite Avenue, from which he reports current weather stats every five minutes. Visitors to the Web site also can get hourly and daily reports, and Conway plans to issue a 10-year report in 2009. He has installed a second weather station at the Palm Springs Visitor Center at Tramway Road, primarily to compare wind factors.

The part of the Web site that has taken on a life of its own is the forum where folks like Clarish (a former Palm Springs resident) chat primarily about the weather, but also about where to eat, where to stay, and what to do in Palm Springs. The diversity of forum members is evidenced by the fact that a woman from Maryland won the psview.com contest to pick the day the temperature would first reach 110 degrees this summer (Washington’s Clarish won the contest to pick the day it would first reach 115).

Another popular feature of the Web site is live feed from Web cams in Palm Springs: two at Viper Logic’s offices, two downtown in front of Huesso Gallery, one at the Palm Springs Visitor Center, and one at Viasys Health Care on Gene Autry Trail at Tachevah Drive. Conway has seen people stand in front of a camera, call friends on their cell phones, tell them to log onto the Internet, and then wave.

In September, Conway launched weather Web sites for 26 beach cities (all can be viewed through www.californiabeachweather.com). So far, he has turned down offers to sell or trade the sites, including one offer for $2.5 million for psview.com. “That’s not what I built it for,” he says. “This is my only public thing.” By that, Conway refers to his business of software and Internet development and Web maintenance as “under the hood, like the engine of a car. So it’s nice to have some toys that I can share.” And, he adds a moment later, “it’s been a great promotion for the company.”