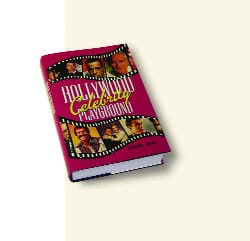 Addicted to booze and pills, Marilyn Monroe — devastated that JFK wouldn’t divorce Jackie and marry her — “was frequently too depressed to bathe or wash her hair,” George Jacobs (Frank Sinatra’s valet from 1953 to 1968) reveals in the juicy new book Hollywood Celebrity Playground (Barricade Books, 2006)
by Howard Johns.

In the wake of his popular Palm Springs Confidential (Barricade Books, 2004), Johns — a longtime Palm Springs Life contributing editor — has produced a razor-sharp compendium of accounts of celebrities
on their best and worst behavior in and around Palm Springs.

“The once-glamorous blond bombshell was puffy-eyed and overweight, and depended on cash handouts from friends and the fleeting love of strangers to assuage her feelings of worthlessness,” Johns writes. “It was a pitiful sight.”

An exclusive excerpt from Hollywood Celebrity Playground will appear in the January 2007 issue of Palm Springs Life. Don’t miss it!