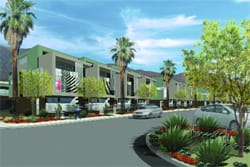 Those who enjoy living and working in Palm Springs will soon have the chance to do both in the same place. The Cameron, billed as the area’s first mixed-use development, is scheduled to debut in early 2008 with town homes and 20,000 square feet of retail space. Jay M. Reynolds, principal of Los Angeles-based OJMR architects, refers to it as an “open, urban village.”

This touch of big-city living will hunker down on 11 acres at Mesquite Avenue and South Palm Canyon Drive, where Reynolds sees its pedestrian-friendly design as encouragement for residents to walk to and from downtown shops and restaurants.

OJMR’s first Palm Springs housing project — a group of 16 two-story town homes called The 2801, with similar modern architecture, was at full capacity several months after becoming available for occupancy. Located at 2801 S. Palm Canyon Drive, each unit’s walls reveal a close-range view of the San Jacinto Mountains. The Cameron (shown here) will employ a similar modern-design approach, with 72 residential units and 30 live/work spaces, all with views, an open floor plan, and loft-like feel.

Robert Ramblas, realtor for Canyon West Real Estate — the firm representing The Cameron’s sales and marketing efforts — says initial interest has largely come from creative people who own a business in Los Angeles and want to work here as well. “Architects and interior designers have expressed interest. We’ve also heard from furniture designers who would like to use the work space as a showroom and artists who want to use it as more of a studio,” he says. The live/work spaces offer about 750 square feet on the ground floor and 1,350 square feet of living space above.

The Cameron takes its name from former Palm Springs mayor George Cameron Jr., who commissioned the original Cameron Center designed by William Cody on the same site in the mid-1950s. Though the Cameron Center was not built according to Cody’s design, it did include his Googie-style Huddle Springs Restaurant. Reynolds says he used Cody’s original plans for cantilevered second floors and angular rooflines as a starting point for the new Cameron.

Also on the horizon is The Palm Canyon, a multi-use project by O’Donnell Escalante Architects going through the approval process. Three years in the making, the property at Ramon Road between South Palm Canyon and South Indian Canyon drives aims to boost downtown revitalization. “By blending commercial and residential spaces, we will get people living there, which will make for more consistent life and activity downtown,” says Brian Linnekens, a partner in South Palm Canyon L.L.C., the firm behind the project. Renderings include elevated gardens atop the retail spaces, courtyards, and a rooftop pool and spa.
— Lisa Marie Rovito