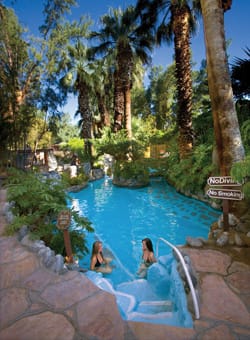 After purposely flying under the radar for decades, the Desert Hot Springs spa resort is ready to show a new face to the Coachella Valley. While continuing to dearly guard the privacy of its celebrity clientele, Two Bunch Palms wants local residents to feel welcome too.

For the first time, the resort is courting its neighbors with a $99 locals-only rate from June 4 until Sept. 20. But the outreach goes beyond discounted rooms. If not for the hush-hush environment of the hot mineral springs Grotto and spa grounds, one would almost think Two Bunch Palms was going to be party central. The summer nights calendar includes Old Hollywood Movie Night, wine tastings, themed cookout nights and cocktails, stargazing and champagne, and cooling spa treatments with chilled wine and icy cocktails.In addition to overnight stays, Two Bunch Palms offers a day-use package that includes one spa treatment and an additional two hours on the property, during which a guest may soak in the Grotto or swim in the pool. A $25 resort fee is added to the cost of the spa treatment.

The Oasis package, for local residents only, is available from 9 a.m. to 3 p.m. for $350 and from 3:30 to 10 p.m. for $395. It includes access to the Grotto and pool, two one-hour spa treatments, and lunch or dinner in the Casino Restaurant. An evening-option guest also may join in whatever activity is going on during the summer nights, be it a wine tasting or Old Hollywood Movie Night.

When the resort opens its Healing Arts Kiva (expected by mid- to late summer), yoga, Pilates, tai chi, and other classes will be incorporated into the Oasis package.

Some events, such as an art opening or book signing, will be open to a limited number of local guests just for the event.