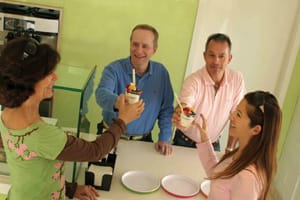 Grab a frozen yogurt from Cactusberry in downtown Palm Springs and you’ll get a bonus of corn and potatoes.

It’s better than it sounds. After all, you don’t eat the corn and potatoes; they’re just used to make cups, lids, and spoons.

Cactusberry owners Dolf Castillo and Darron Dahle took Al Gore’s warnings about global warming to heart when they saw his film An Inconvenient Truth. Before opening up shop in a 1936 La Plaza building, they installed energy-efficient insulation and inch-thick, dual-pane windows. Through research, they found 100 per-cent biodegradable packaging made by NatureWorks, the first U.S. company to manufacture greenhouse gas neutral polymers from 100 percent renewable resources.

Castillo and Dahle pay twice as much for the corn-based cups and lids and potato-based spoons, plus extra to have biodegradable notices printed on the packaging.

“As the public becomes more aware of healthy choices in eating, then you can take it a step further,” Castillo says. He adds that he and Dahle were influenced by frequent trips to Europe, where they noticed businesses are paying attention to being green. “Why not apply those principles to the desert, which is such a fragile environment?”