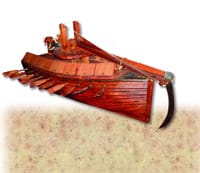 Stroke of Genius
If you have scissors at home, congratulations: You own a da Vinci.Mention the name Leonardo da Vinci to most people and they think of the Mona Lisa and Last Supper. But the Renaissance man’s talents extended well beyond canvas: to architecture, music, mathematics, science, and engineering.

“Painting bored him,” says Godfrey Harris, a public policy consultant and the man most responsible for creating The Da Vinci Experience exhibition opening Nov. 3 at Palm Springs Air Museum (which marks its 10th anniversary on Nov. 11). “How he came to master [the other] skills so we can learn 500 years later is why we call this an ‘experience,’ not just an exhibit.”

Da Vinci excelled despite several strikes against him. “As an illegitimate child, he had no opportunity to enter society,” Harris says. “He could not go to the university; he could not have a profession. So his father thought he could have a chance in life if he developed a craft. And the craft was painting, because royalty needed religious art.

“Strike two is that he was left-handed, which at the time was considered the work of the devil. He not only wrote left-handed, but also wrote backward, right to left. Some thought it was not to smudge; others said it was to hide what he wrote. I happen to think it was because he liked to take risks.”

As an example of that risk-taking, da Vinci continued his pursuit of knowledge of how the body works while a guest at the Vatican when he was hired to paint. “He collected dead bodies and performed autopsies,” leading to his ouster by the pope, Harris says.

Gaining an understanding of the thinking behind the famous artist whose inventions outnumbered his paintings is best accomplished not by reading his 16th century codices or going to a Ron Howard movie, but rather by looking at his inventions.

And people are still learning from da Vinci. In 2000, the U.S. Food and Drug Administration approved the da Vinci Surgical System, a “robot” that allows surgeons to get closer to a surgical site than human vision allows. In 2001, a bridge designed by da Vinci in 1502 was built in Norway. And last year, a British heart surgeon developed a better way to repair mitral valves after studying one of da Vinci’s anatomical drawings.
Perhaps The Da Vinci Experience will inspire more creative minds.
— Janice Kleinschmidt

Build it and They Will Come
Here is a sampling of the 61 machines replicated by Italian artisans for The Da Vinci Experience:
> Hang glider: It worked, though “somebody flew this puppy and crash-landed and broke his arm in the process,” Harris says.

> Air screw: This is the forerunner of the helicopter and thus the genesis of “eye-in-the-sky” traffic reports.

> Foot pontoons: Da Vinci fashioned footwear that allowed a person to walk on water as a party trick.

> Robot: Another party trick, this 16-foot figure could rise, turn, and wave, thanks to manually operated pulleys.

> Bicycle: Historical records credit the Comte Mede de Sivrac of France with a precursor to the bicycle in 1790. But da Vinci, who died 271 years earlier, developed a two-wheeled peddling machine that transferred power by way of a continuous chain.  The drawing was buried “as an afterthought” in the Madrid Codex, uncovered in 1950.

> Chamber of mirrors: This curiosity (invented to entertain party guests) led to a standard circus attraction and helped Hitchcock create suspense in Vertigo.

Higher Learning
As an eighth grader at St. Theresa School in Palm Springs, Jessica Bolanos heard that plans for Xavier College Preparatory in Palm Desert were crystallizing. But concern lingered.

“I was excited that a Catholic high school finally was being built,” she says. “I was going to have the high school experience I wanted with a Catholic education as part of it and very strong academics. But the timing wasn’t certain.”

Bolanos became a member of Xavier’s first class of about 75 when the school opened in September, even though the first two buildings on the 90-acre campus were incomplete, forcing Principal Chris Alling to use temporary space a mile away on the Palm Desert campus of California State University, San Bernardino.

“We had a hardcore group that maintained the belief the school was needed in the valley,” says DoeDee Rover, a mother of four who has chaired the project’s board of directors for nearly five years. “Academically, Xavier’s college-preparatory curriculum means every student takes course work that qualifies him for admissions consideration to a University of California system school.”

Xavier is a hybrid institution. It resembles a traditional Jesuit school in all respects except it is owned, governed, and staffed by lay leaders instead of by the Society of Jesus.

The campus at the north end of Cook Street was donated by the Palm Desert-based H.N. and Frances C. Berger Foundation and will include a stadium and other athletic fields, library, 36 classrooms, chapel, music and arts complex, swim center, amphitheater, dining hall, bookstore, and administration wing. The $60 million construction is scheduled in phases over several years.

“I think it’s neat to be the first class here, to be the ones creating traditions,” Bolanos says. “We are not the new kids on the block, the freshmen among a bunch of upperclassmen. It’s nice to have older students, sure, but this is a fun way to start.”
— Rick Davis

Defining an Education
Jesuit education incorporates methods that contribute to the intellectual, social, moral, and religious formation of the whole person. It presents academic subjects out of a human “centeredness,” with stress on exploring the patterns, relationships, facts, questions, insights, conclusions, problems, solutions, and implications that a
particular discipline brings to light about what it means to be human.

Jesuit education strives to give learners ongoing development of their imagination, feelings, conscience, and intellect and to help them recognize new experiences as opportunities to further growth. Learners see service to others as more self-fulfilling than personal success or prosperity.
Source: Association of Jesuit Colleges and Universities

A Sense of Place
Freehand sketches, drawings, and photographs in an intimate exhibition at Palm Springs Art Museum offer revealing insight into the structures by iconic architects.

A Point of Convergence: Architectural Drawings and Photographs from the L.J. Cella Collection, which continues through Jan. 21, 2007, features works by Frank Gehry, Daniel Libeskind, and Richard Neutra, as well as site-specific drawings by Robert Irwin, Chris Burden, and Lawrence Halprin.

San Francisco collector L.J. Cella assembled the works by concentrating solely on two-dimensional images of built forms to reveal the exhibit’s namesake “point of convergence” in studying form and architecture. The media include pen ink on paper napkins, graphite on paper, and pastel on paper, notably Neutra’s Kronish House (1953).

Organized by the museum, the exhibition emphasizes aspects of the built environment from the 1950s to the present and demonstrates the variety in technique and expressive modes in creating real and fictional architectural and living spaces.
— Steven Biller

Leeds & Son’s new 6,300-square-foot jewelry showroom in Palm Desert exudes richness, quality, and fine taste. “I don’t want just a nice store: I want an awesome one,” says Terry Weiner, who purchased the Coachella Valley business from his parents 18 years ago. “This was a $5 million project two years in the making. Our objective is to take the customer experience to the next level, to make it more enjoyable.”

The former Edith Morre location gives Leeds triple the space of its previous address. Now a plasma-screen television, aquarium, putting green, and refreshments entertain customers waiting in the lounge to have their jewelry repaired. The new space includes a 1,000-square-foot, state-of-the-art repair and manufacturing center with laser-welding technology.

“I believe customers want value and they want a relationship,” Weiner says. “We wouldn’t still be in the valley without repeat customers.”

Weiner’s parents, Edward and Eleanor, opened the first Leeds store in Indio in 1947 and opened a store in Palm Springs Mall in the ’60s. That store moved to Desert Fashion Plaza in the 1980s, then to a spot on Palm Canyon Drive in the ’90s. The Palm Springs store closed in 2002, but by then Leeds already had an El Paseo store. With the latest move, Weiner says Leeds has fully arrived.
— Rick Davis