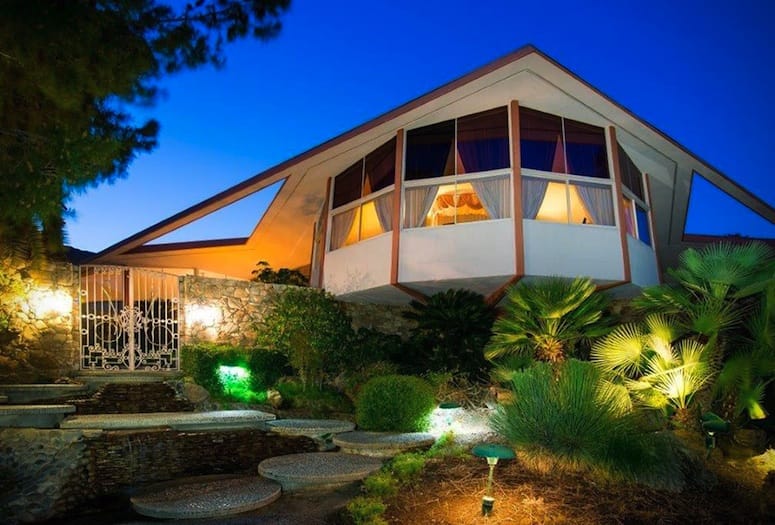 Priscilla Beaulieu of New York, the step-daughter of a U.S. Air Force officer was 14, with big, beautiful eyes, when she met her beau in Weisbaden, Germany. He had grown up poor in a Mississippi ghetto, but now millions of fans were enraptured by his combination of rockabilly and the jittering dance style he learned at African American church revivals. They dubbed him the King of rock ‘n’ roll.

Seven years later, on May 1, 1967, Elvis Presley and his bride wed secretly in Las Vegas and spent that night in a stunning Palm Springs home they had leased for a year, later known as Honeymoon Hideaway.

On May 6, fans will celebrate the Presleys with a Golden Anniversary Concert in the living room of this quintessential midcentury house on Ladera Circle, where tourists from around the globe still make pilgrimages. You can renew your marriage vows, eat wedding cake by the pool, and enjoy an evening of music by Elvis Tribute artist George Thomas, plus the Palm Desert Strummers and 50s/60s singer James King. Tour leader Michael Ochoa says fans can even tie the knot at this home where Elvis and Priscilla’s daughter, Lisa Marie, was conceived. “Thomas is an ordained minister,” he says.

Ochoa says Elvis and Priscilla also spent part of their honeymoon at Graceland and at their Circle G Ranch in Mississippi. “They got dressed up again and did a repeat of their wedding at Graceland for friends and family who hadn’t been able to go to Las Vegas,” he says. Ochoa has been an Elvis memorabilia collector since age 9 when he saw the King close up at a concert. His collection now decorates the Honeymoon Hideaway. 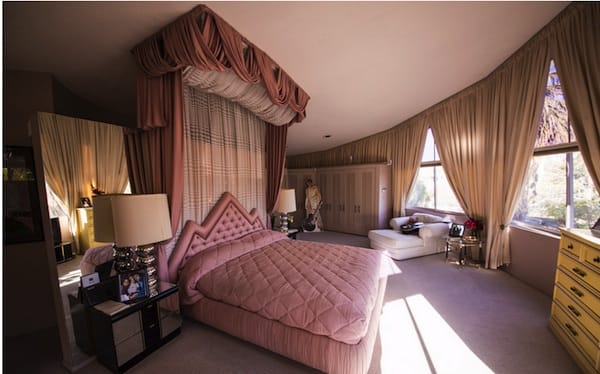 The furniture at Honeymoon Hideaway is original, but has been re-upholstered.

Elvis originally visited Palm Springs because his manager, “Colonel” Tom Parker, had a home there, Ochoa says. “It was a small town then. It was perfect for Elvis. Where else could he go after making a movie or doing a concert? He couldn’t walk on normal city streets. Celebrities were everywhere here, so they could feel at home. You might see Bob Hope at a restaurant or find Liberace at the supermarket. No one bothered them. Elvis could take Priscilla shopping,” Ochoa says.

Hollywood columnist Rona Barrett lived in the neighborhood and learned of the upcoming Presley wedding, originally planned for Palm Springs, when she saw the King’s best friends, the Memphis Mafia, at the local convenience store, Ochoa says. So, Elvis and his entourage flew to Vegas instead. Barrett reportedly sat outside Honeymoon Hideaway waiting for the wedding and was angered to learn she had missed the event.

Originally called House of Tomorrow, the home was designed by William Krisel and built in 1960 by the city’s leading developer, Robert Alexander. The dramatic A-frame roof sits atop three-levels built in concentric circles, with four bedrooms, lots of glass, and built-in features. Priscilla was inspired by the décor when selecting furnishings for some of the rooms at the new Guest House at Graceland resort, according to the Graceland website. The furniture at Honeymoon Hideaway is original, but has been re-upholstered, Ochoa says. The home has been a vacation rental but is currently for sale, priced at $7 million. Snowbirds from Boston bought it in 1989, says Ochoa. They still own it through a trust. 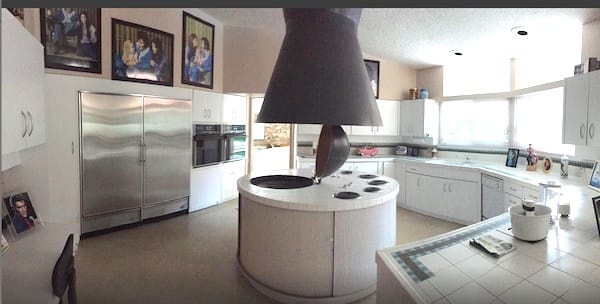 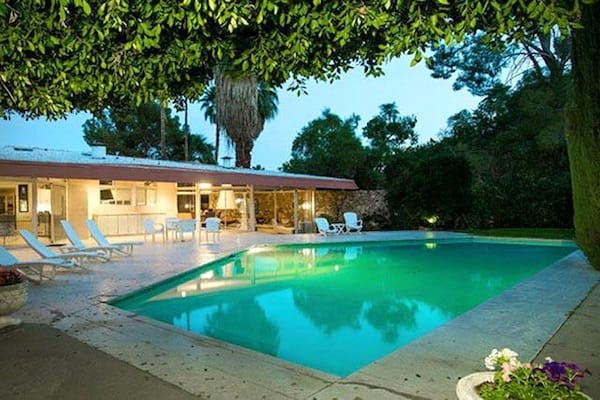 Some visitors say they can feel Elvis’s spirit there.

“Even grown men cry when they come into the home,” Ochoa says. “Music plays into your life. People have memories attached to Elvis’ songs.”