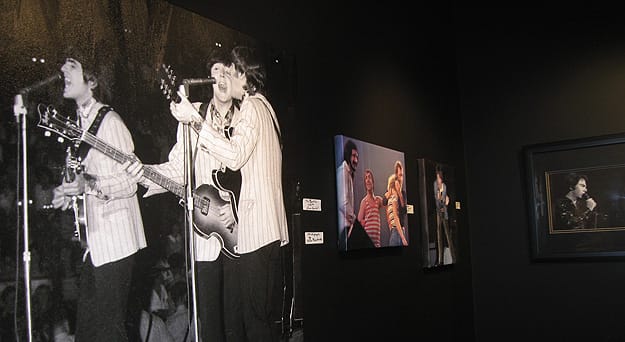 The sexy, red and black interior of Flashback gallery, El Paseo’s newest nod to pop culture, is a fitting tribute to the rock stars and celebrities who hang there. Literally. The dark walls are festooned with mostly black and white photos of music and film legends in their heydays. Elton John, Mick Jagger, Vincent Price, Brigitte Bardot, Elvis – the list is a veritable who’s who of the music and film industry. Famed rock photographer John Rowlands shot the majority of compelling images that populate Flashback, with the rest an assortment of mostly gifted and purchased celebrity photos.

Flashback’s been in the making for around 13 years, according to gallery owner and artist Max von Wening, who also operates another gallery, von Wening Art, next door in The Gardens on El Paseo in Palm Desert. When his retail neighbors closed their doors, Max pounced, wanting to keep the positive Gardens’ vibe alive by not having dead space nearby. “They [The Gardens] said, ‘Why don’t we dress up the windows? And I said, ‘Why don’t we open up a store?’” And he did.

Flashback held its grand opening on June 23, 2010. The invitation-only event featured Mickey Thomas of Starship, as well as Rowlands, who signed copies of his coffee table book, Rock & Rowlands Flashback: Five Decades of Music Photography by John R. Rowlands. Flashback, the gallery, is basically a brick and mortar extension of the book, says von Wening, who met Rowlands 16 years ago.

“We became really good friends,” von Wening recalls. “I became his back-up guy with a camera.”

“Photography became my hobby,” von Wening says, whose primary creative outlet is painting portraits and abstracts. His portrait work attracted the attention of other photographers after his colorful impression of Marilyn Monroe made the rounds. Shooters would bring in their photos, which Max would transform into brightly hued renderings. His spirited oil-on-canvas depictions include Grace Kelly, Elton John, Rod Stewart, Mick Jagger, and Willie Nelson.

Max von Wening’s abstracts can be found throughout the desert, most notably 32 works that hang in JW Marriott Desert Springs Resort & Spa. He’s also able to customize his abstracts to satisfy a customer’s individual preference with regard to color and size. This self-taught artist also paints portraits of pets. Prior to relocating to The Gardens, von Wening owned Art by Max in Palm Desert’s Westfield Shoppingtown mall.

Even with von Wening’s extensive art business background, the new Flashback gallery is really about John Rowlands, von Wening says. “He’s the photographer. I’d rather be known for this,” says Max, pointing to a signed painting of Willie Nelson, “than for pushing a button.”

The captivating work of John Rowlands, however, is so much more than mere button pushing. With a career spanning 50 years, his intimate photographs celebrate music, while revealing both the angst and the anarchy of the industry. Pete Townsend and Keith Moon backstage following The Who’s last show of the tour in 1976, a large bottle clutched between Moon’s hands. Two years later, Moon would die of an overdose of a drug ironically meant to help wean him off alcohol. A beautiful lighted portrait of Vincent Price, with a rare glimpse into the star’s playful side. A young Michael Jackson, before the demons that plagued him took hold. These are the types of images that appear both in the book and on the walls of Flashback. The book also contains descriptions of each image, what was going on at the time of the photo and other personal anecdotes that breathe life into each photo by creating a real sense of time and place.

The corresponding images in the gallery come framed in glass or reproduced on stretch canvas to reduce glare. But no matter how the photos are presented, everything is homegrown. “I do everything by hand. Cut the wood for the frames. Make my own canvas … I do everything but grow the tree,” Max teases.

How he comes by all these images, beyond those supplied by John Rowlands, is a wondrous mix of perseverance, foresight, and dumb luck. Some are public domain, others he purchases from photographers and estates, like one he recently purchased of Elizabeth Taylor and Richard Burton in Sweden. Finding the origin of these photos requires significant research. “We do as much as we can, but if we have to, we’ll remove it,” he says of photos with a questionable past. But the majority of the photography in Flashback, about 80 percent, is the work of John Rowlands. And people like what they see, says Max.

“People enjoy historical things, things that take them back,” he says. “Flashbacks are a good thing. That’s what people want, instead of CNN and hearing about the oil spill all the time.” Like when I hear the theme song from the Mary Tyler Moore show, I comment.

Another facet of Flashback’s success, Max points out, is the ‘gotcha’ moment. He explains by asking if I recognize a young, very attractive woman in a photo. I don’t. “It’s Brigit Bardot,” he says. “Gotcha.”

But perhaps most importantly it’s that people seem to be happy in Flashback, von Wening continues. “It’s a feel-good store,” he concludes. “Flashbacks are one of the best feelings in the world.”

Flashback gallery is open from 10:30 on, and von Wening is around seven days a week. There are only 1000 copies of John Rowlands’ self-published book, Flashback: Five Decades of Music Photography. For a limited time a free print is included with a book purchase (details at www.rockphotobook.com). The book can be purchased at the gallery or at www.rockphotobook.com. Cost is $125. Both Flashback and von Wening Art are located in The Gardens on El Paseo at 73-585 El Paseo, Suites A1126 and A1132 respectively. For more information call 760-340-6711, email max4art@verizon.net, or visit www.artbymax.com.