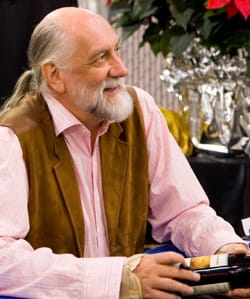 Jonathan Todd stopped his dentist from drilling one of his teeth to take a phone call. Mick Fleetwood was calling from a restaurant overseas.

“They are giving me this wine list, and I don’t see something I know and like,” Fleetwood said. “What do I get? You know wines. Let me read you the wine list.”

“Dude, you are in France!” Todd replied. Fleetwood then expressed the desire to have a wine that he loved available wherever he went.

“I jokingly said, ‘We’ll just build Mick Fleetwood wines and distribute them worldwide,’” Todd recalls. “Ten minutes later, he called back and said, ‘Could we do that?’”

“We thought we would open a vineyard at first, but Mick is so eclectic in his taste that no one vineyard would represent everything he likes,” Todd says. They decided instead to work with multiple winemakers. When word got out, wineries began sending samples. Todd and staff members do the initial tasting. “When we think we have a winner, we take them to Mick.” Then, in a blind tasting over dinner, Fleetwood decides which winemakers he wants to approach about a collaboration.

Hyatt Regency hotels from coast to coast and fine restaurants worldwide first began serving Fleetwood wines. Then Fleetwood did four bottle signings at Gelson’s gourmet supermarkets in Southern California. “We took a video of that to Costco,” Todd says, and they ended up with a 36-store bottle-signing tour unlike any music tour Fleetwood ever made with his megastar band, Fleetwood Mac.

However, the signings — at least the one in Palm Desert’s Costco — have the benefit of a Fleetwood Mac soundtrack, as well as a video of stills showing Fleetwood smelling and tasting wine. Accustomed to standing on a stage with thousands of music fans below and beyond, he looks surprisingly comfortable with nothing more than a folding table between him and a line of customers with shopping carts. Some even step around the table to have their picture taken with Fleetwood. He smiles graciously, he chats, and he doesn’t hurry anyone along. He actually looks like he’s having fun.

Fleetwood, who has two homes in Maui (one on the famed Haleakala volcano), has no desire to someday own his own vineyard.

“I think I can have a lot of fun doing this and travel as I do,” he says. “This is something I have confidence in. It’s what I like. I can do this and do my music and be involved in other things.”

He does, however, have one dream: I look forward to doing some very exciting things outside the U.S.” Specifically, he says, he would like to collaborate with winemakers in New Zealand and/or Australia.

Fame in a Bottle
Celebrities lend their names, faces, and time to wine.