Flickers in the Dark 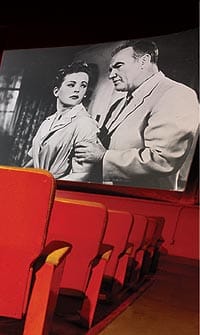 Arthur Lyons steps into the dank, dark bar with the subtlety of a cluster bomb. He shakes off his rain-soaked fedora and holds it gingerly in both hands, as if he might have to drop it at any moment to fend off a punch, or to pull a Smith & Wesson from his waistband. He spots the journalist seated at the far end of the bar and walks over, his eyes glinting off the desperate and lonely faces gathered around the room. Tonight, he thinks, I’ll tell my story.

Or something like that: The dank, dark bar is actually the light and airy Cedar Creek Inn, the weather clear and hovering around 90 degrees. Lyons, the crime writer-turned-Palm Springs Film Noir Festival director, is dressed in a black T-shirt and beige pants and the denizens of the restaurant, including the aforementioned journalist, look about as desperate as Britney Spears. Hardly the ideal audience for a film festival focused on the underbelly of society, right?

Not if you look at the hard facts: Entering its fourth year, the festival has solidified its place among the litany of local film festivals — the behemoth Palm Springs International Film Festival in January and its little September sibling, a festival of short films — and has become one of the nation’s top festivals of its kind, featuring movies that have not seen the interior of a theater for some 50 years.

Film noir — loosely defined as a film shot in dark, brooding tones featuring interesting cinematography, characters involved in nefarious (usually criminal) activities, an urban locale, and the foreboding sense that everything is about to fall apart for all the characters involved — has seen a resurgence in the last 10 years with the popularity of films like Pulp Fiction, LA Confidential, and Memento, but for Lyons, noir never disappeared.

“Noir is very plot-oriented,” he says. “They are all stories. Today in movies you have people running around blowing up things, or people chopping other people into pieces with axes — but there’s no storyline. Or you get two hours of dysfunctional family members arguing with each other. Noir storylines are very compact and very character- and plot-driven. Film noir has really influenced film in general: You look at Batman or Blade Runner, for instance, and they are shot in the classic noir style — the lighting and cinematography especially.”

This year’s films represent both a slice of the Golden Era of the 1940s and ’50s and two that are classically neo-noir: 1972’s Hickey & Boggs (directed by and starring Robert Culp, and co-starring Bill Cosby in a role that is distinctly different than any he’s had before or since), and 1964’s The Naked Kiss, which closes the festival Sunday evening with a literal smash. It’s a bill sure to lure the avid noir fan, but Lyons is hoping for even more, which is part of why the festival is now being held in June.

“When we held the festival in May, it was hard for people to find hotel rooms, and when they were able to find them, the prices were through the roof,” Lyons says. With plotlines that hedge toward the mad, the bad, and the difficult to kill — to say nothing of their innate steaminess — June has become the perfect match, at least weather-wise, and Lyons expects to improve on the nearly 40 percent increase in support from last year.

“A lot of people have never experienced these kinds of films,” Lyons says. “They showed The Maltese Falcon in San Francisco and there was a line of kids around the block — 1,200 people. They’d never seen a black-and-white movie on the screen. It was amazing.” With a spate of neo-noir films set for release later this year — including the John Cusack and Billy Bob Thornton picture The Ice Harvest and John Sayles’ Silver City — it might not be long until a similar line forms around the Camelot, fedoras optional.

All screenings at Camelot Theatres,
2300 Baristo Road, Palm Springs, 325-6565.
For details about films and events, point your Web browser to www.palmspringsfilmnoir.com