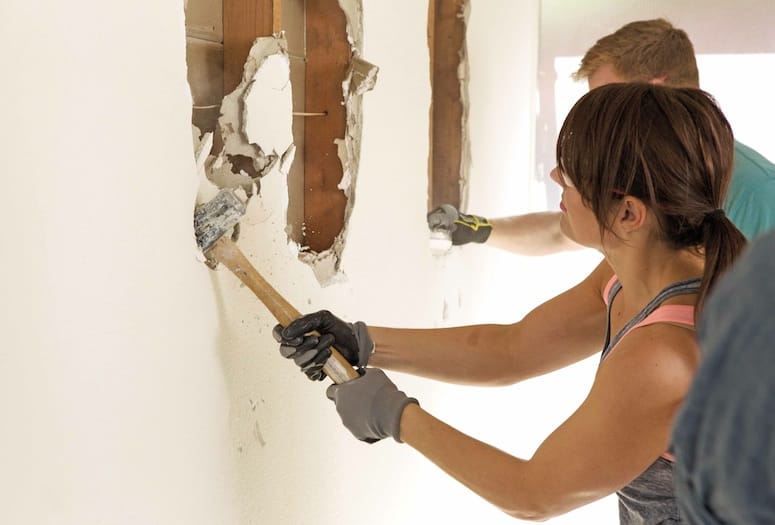 Lindsey and Eric Bennett pulverize a wall separating the entryway from an unneeded half-bath while filming for Desert Flippers season 2.
PHOTOS BY R. FESTINO

It’s late February and Lindsey and Eric Bennett are about two months into filming  the upcoming season of Desert Flippers. With producers Brian Seidel and Ronn Kulisek, they’re walking through a scene in the great room of a 1,225-square-foot, flat-topped midcentury home, built in 1957. Its orange paint is peeling; the yard is overgrown; and its current residents are a mother dove and her eggs, who appear contentedly confined to a pile of sticks in the corner of a clerestory windowsill. The rest of the place is gutted.

The Bennetts’ HGTV show chronicles the couple’s property transformations across Greater Palm Springs. Episodes depict quintessential desert living and design — with fully saturated cloudless skies and bougainvillea plumes, shots of bustling downtown bistros, aerial views of sprawling golf resorts, and, of course, scorpion encounters. In January it was announced they’d been picked up for a second 10-episode season, which begins in June.

He met her at a bar: a bright-eyed brunette who, coincidentally, was also a rookie remodeler. Both happened to be renovating basements, although his progress was admittedly inferior. The Wisconsin watering hole marked the geographic midpoint between their respective restorations. He spotted Lindsey as she left the building, on her way out with a friend. Eric rapped his fingers against the windowpane. With a gentle smile and suave curl of the wrist, he coaxed her back inside.

The two chatted late into the night and established their real estate connection. “One of the things that was so appealing about Eric to me was his ambition and our alignment of opportunities in life and what direction we wanted to go,” Lindsey recalls — he was a baseball coach at the time, but he was keen on playing the housing market. “And my good looks,” says Eric. “Yes, and your good looks,” she agrees. “And your muscles.”

Both were in their late 20s and on the apex of new adventures. What they could not possibly fathom as they became acquainted, cogitating spackle and decrepit drywall joints, is that those adventures would be taken together. Just a few months after meeting, they packed up and moved to Palm Springs with Lindsey’s brother.

Eleven years and three babies beyond their nascent basement makeovers, the Bennetts have become a welcome addition to any late-night design show junkie’s binge list.

There’s a proven formula for a successful HGTV remodel series. It’s worked for Fixer Upper’s impossibly likable Joanna and Chip Gaines in Waco, Texas, and for Masters of Flip’s edgy Kortney and Dave Wilson in Nashville, Tennessee, and it seems to be working for the Bennetts. It requires a perky wife with perfect skin and particular, sometimes demanding,  design tastes. Add a funnyman husband for the heavy lifting and inevitable potty jokes on bathroom demo day. Include a neighborly general contractor with a well-worn oversize tool belt that probably doubles as his gun holster. A band of adorable children may scamper through a scene to visit Designer Mom, who will be found wiping down the freshly laid quartz countertops and arranging a few quirky accessories for open house day.

John Feld, senior vice president of programming for HGTV and DIY Network, says viewers tune in for “passionate individuals who are flipping to save a home or improve a neighborhood — not just to make money.”

This is television that manages to suck you in for just… one… more. Sure, you know that next dividing wall is going to be load-bearing and the flippers are bound to go over budget, but the accent color in the episode that follows might be topaz and the kitchen island might actually double as a magical dishwashing robot. 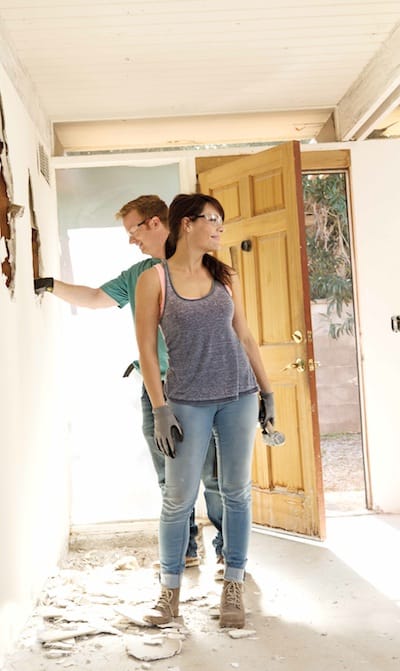 A little drywall dust doesn’t frighten the flippers, nor the resident dove nesting overhead to the right of the door.

While most Palm Springs–based television pilots have fizzled out faster than a Coachella Valley cold spell (Bravo’s Welcome to the Parker lasted six episodes; The CW’s Hidden Palms lasted eight), Desert Flippers saw a notable ratings spike among the 24 to 54 age bracket in the 11 p.m. time slot through its first season, which aired from August to October 2016. Feld credits Lindsey and Eric’s likability for the series’ success and uptick in viewership. “[As viewers] we root for them to succeed and to be able to make a living for their family through the profession they’ve chosen. And the locale — beautiful Palm Springs — didn’t hurt,” Feld explains. “They flipped a cactus there! You don’t see that in our other shows.” An average 4.5 million viewers tuned in each month through the first season to watch the Bennetts’ flashy desert-modern flips unfold.

“One thing that we always thought in the beginning of the process for the TV show is that it probably wouldn’t stick because we’re really boring,” Eric says. “We don’t have crazy hobbies. We don’t go skydiving. We’re not Spartan racers. We don’t sing.” The show’s prosperity has a lot to do with the Bennetts’ normalcy. They’re attentive to their careers and their family life. Eric still works as a home loan specialist in Palm Springs and Lindsey commands the house. “We just work a lot, and that’s always what we did,” says Lindsey. “We would always just talk shop because we both loved it so much.”

Desert Flippers wasn’t the couple’s first foray in front of the camera. Eric previously appeared on ABC’s obstacle course game show Wipeout as well as Wheel of Fortune, and he and Lindsey completed the Hydroxycut weight-loss program together and appeared in the company’s before-and-after advertising campaigns. “We were on a couple of commercials for that and in a couple magazine ads, but had no real history of doing  anything else,” Eric says.

HGTV was looking for flippers in the Palm Springs area for a pilot show back in 2014 and, shortly after filming for Hydroxycut, the Bennetts received an email invite to try out.
They filmed audition tapes at one of their project homes — first a three-minute video, then 10, which Eric says “took a little bit more coordination.” There was a Skype interview. And HGTV had found their flippers. “They inhabited the traits we look for in all of our talent,” notes Feld. “Passion, expertise, tenacity, sense of humor, and likability.”

The Bennetts work with investors, often real estate agents with income properties. HGTV does not fund the residential overhauls or offer guidance in acquisitions. “We follow their real business,” Feld says. “So even though we are aware ahead of time which houses will be featured, we don’t interfere in the process.” The midcentury properties on Desert Flippers stand out against its sister shows, and  Feld notes the area isn’t a bad place to film. “Production-wise, we love the weather. We can shoot year-round without any weather-related construction delays.”

Lindsey is the designer, her brother, Mike Schneider (known on the show as Uncle Mike), oversees construction, and Eric wheels and deals. “I’m the one that signs the deals and finances them, structuring them and planning and … the stuff that makes boring television,” Eric says. “Otherwise I’m the grunt labor, unskilled-but-yet-supportive husband.”

When season 2 premieres next month, the Bennetts will watch with family sans any lav mics or Steadicams. They’ll be enjoying some much-needed production downtime.

“It’s a look back at the adventure,” Lindsey says. “It’s fun for us to do that as a family. It’s kind of like going through a photo album.” For Eric, one of the weirdest aspects of watching has been the reliving of awkward moments early on in the series. “It’s kind of like having that really bad haircut from the ’80s or ’90s,” he says. For Lindsey, the pilot episode is most embarrassing. “I was a little bit more shy,” she concedes. “As season 1 goes on it feels so much more natural.” Bashful feelings didn’t last long. The crew is small, and as with any job, the right synergy brings a team together like family. There’s a lot of kidding around and a veritable cultivation of creative ideas.

On set for season 2 in South Palm Springs, there is no sign of nerves.

The hillside home the Bennetts are reconstructing is one of 10 they’ll finish during the six-month production schedule. It first sold in 1998 for $125,000. Then in 2014, the two-bedroom foreclosed and an investor couple swooped it up for $232,500, less than half its valuation. It sat unoccupied until Eric struck a deal with the owners. Its original tongue and groove ceiling and central brick fireplace are still, for the most part, intact. And, aside from a pesky telephone pole marking the back-end of the yard, the valley vista is going to be a selling point. From here, you can see the windmills far in the distance like little white pinwheels scattered across a sandbox. Birds flit along the horizon line and up overhead to the Elrod House, the John Lautner–designed home that peeks over a rock from its perch on the neighboring street.

After some waiting around for network approval on this afternoon’s entry-wall demolition, gloves are dispersed, the sound guy rummages through his bag of wires and equipment, and the two cameramen grab their shoulder mounts. Chatter dissipates. Lindsey, Eric, and Uncle Mike hide outside, off-camera, ready to swing open the front door and pick up their sledgehammers.

“Wall demo, take four!” Kulisek calls out as he slaps down the marker.

“All right Ronn, are we set?” Seidel hollers back as he surveys the scene. He takes a beat. “Annnnd … action, guys!”