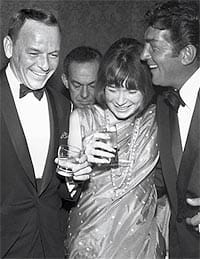 Shirley MacLaine claims that when she first came to California she had more interest in clothes and the climate than in a serious film career.

“I was fascinated by how people dressed in a place without seasons,” says the actress, who will receive the Lifetime Achievement Award at the 2006 Palm Springs International Film Festival.

At some point, however, she must have become intent on movie stardom. No one endures in the business for 50 years and counting, let alone achieves her level of fame and success, without a relentless struggle, right?

To the contrary, “I think I succeeded because I didn’t try too hard,” MacLaine says. “I always took the work seriously, but I had fun with it. Have you heard of ‘The Law of Inverse Effort’?”

She explains the principal with an analogy of being in the water and unable to swim. “If you panic and thrash around, you’ll drown,” she says. “But if you lie back and relax, you’ll float. So, I float.”

Don’t let her casual way of talking about herself make you think she just drifted into stardom. There must have been easier ways for an Arlington, Va., high-school student to spend her summer vacation than hoofing in a New York chorus line. MacLaine took to it well enough to move to the Big Apple soon after graduation.

At 19, she became a chorus member and understudy to the lead in the hit Broadway production of Pajama Game. One fateful night, she stepped into the starring role and wowed the audience, which happened to include a Hollywood producer who signed her to a movie contract.

MacLaine made her film debut in 1955 in the Alfred Hitchcock comedy The Trouble With Harry. In a memorable bit of creative casting, she appeared as an Indian princess in the following year’s star-studded extravaganza Around the World in Eighty Days.

In 1958, her performance alongside Frank Sinatra and Dean Martin in Some Came Running earned MacLaine a leading-actress Oscar nomination, as well as entrance into the notorious Rat Pack. The whole gang appeared in 1960s caper movie Ocean’s Eleven. Her excursions with this bad boy’s club earned her a reputation she says was somewhat overblown.

“I wasn’t really a party girl,” she says. “I just liked to get out of town. I’d jump on a plane at the drop of a hat.” Among the group’s favorite destinations was, of course, the desert resort area, which they helped establish as party central for the entertainment elite.

“I’ve spent a million weekends in a million guest houses there,” MacLaine says. She urges residents to celebrate not the area’s wild past or celebrity connections, but its natural beauty. “Keep Palm Springs clean, pristine, and the paradise that it is,” she says. “It’s a wonderful place.”

MacLaine appeared in three films in 1960. Ocean’s Eleven brought the Rat Pack together for a Las Vegas caper. Can-Can paired her with Sinatra once again and finally gave movie audiences a chance to see her in all her dancing, leggy glory. But the classic The Apartment, directed by Billy Wilder and starring Jack Lemmon, gave her the most fondly remembered role of her early career, as well as her second Oscar nomination. Following 1962’s The Children’s Hour, a reunion of Wilder, Lemmon, and MacLaine earned her a third nomination for Irma la Douce.

More top-billed roles through the ’60s culminated with the Bob Fosse-directed musical Sweet Charity, which showed MacLaine still had the chops and the legs that got her to Broadway. She returned to dramatic roles with 1977’s The Turning Point, a film she says is special to her — and not because it earned her a fourth leading-actress Oscar nomination.

“I love it because it was about ballet, which was so important to me when I was young,” says MacLaine, who began taking lessons at age 2 and had a chance to dance in the film.

She also treasures the memory of working with Peter Sellers in one of his last movies, 1979’s Being There. But her standout role from this period was Aurora in 1983’s Terms of Endearment, for which she finally won the Oscar.

“I think Aurora is my favorite character I’ve done,” MacLaine says. “She’s just wonderful.” Madame Sousatzka from the 1988 movie of the same name also ranks high on her list.

“I’m proud of that film,” MacLaine says. “It’s too bad hardly anybody saw it.” Members of the Hollywood Foreign Press did, as they gave her a Golden Globe for it. Many more saw and enjoyed her in 1989’s Steel Magnolias and 1990’s Postcards From the Edge, but another film of which she’s proud, In Her Shoes, came and went without much notice in fall 2005.

“In a time when a lot of movies just aren’t very good, this had something real to say about dysfunctional relationships and healing through communication,” she says. “I think maybe people don’t trust Hollywood to make that kind of movie anymore.”

At least MacLaine hasn’t given up on movies. In Rumor Has It, which opened in December, she played a woman who was the real-life basis for Mrs. Robinson in the classic The Graduate. But is it a true story?

“Oh, who knows what’s true anymore?” she asks rhetorically. “Do you? I certainly don’t.”