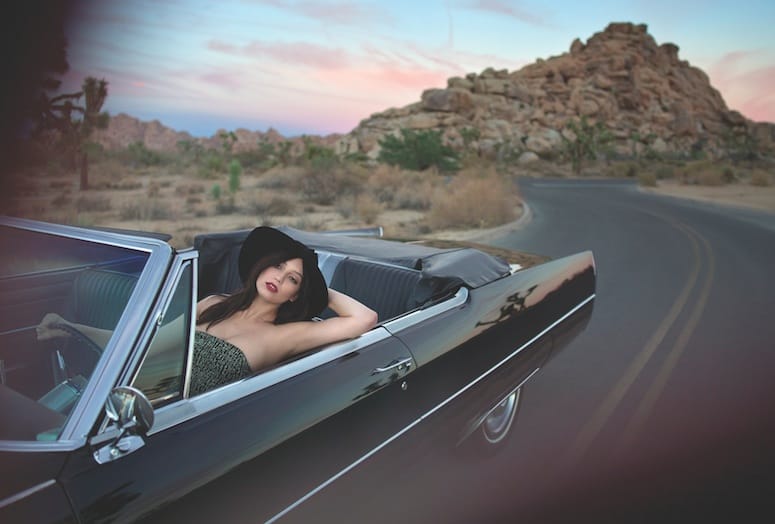 Daisy Lowe struts effortlessly across the sandy terrain at a Coachella Valley wind farm like a desert-born creature, in perfect rhythm and harmony with the magical, wild environment.

On her next quest, she drives a vintage Cadillac with abandon through the dusty hills of Joshua Tree National Park, then perches on the edge of Palm Springs at Frey House II, eventually moving to the Parker to strike poses with her voluptuous figure, reminiscent of a Hollywood pinup.

Lowe visited the valley for a three-day photo shoot after the Greater Palm Springs Convention & Visitors Bureau invited renowned British-born photographer and director Greg Williams to experience the area and capture it through his own perspective. Lowe was Williams’ first choice for the shoot, and she welcomed the chance to return to the desert. Daisy Lowe at the entrance to the Parker Palm Springs.

“When the Palm Springs project came up, I was honored Greg wanted me to be a part of it, and of course I immediately jumped at the opportunity to work with him and visit one of my favorite places,” Lowe says. “I first came here when I was 17 and just completely fell in love with it. When you drive from L.A. and you hit that wind farm, it’s so beautiful. Just being in the middle of the mountains makes me so happy. With all the incredible landscapes, it’s a dream to shoot in Palm Springs. It feels cinematic.”

Lowe and Williams have a long-standing working relationship. “I met the amazing Greg when I was 21; he was actually one of the first photographers to allow me to collaborate with him during shooting,” Lowe says. “Although he had a strong vision and direction, I really loved how he made me feel totally comfortable and in control purely by asking my opinion and thoughts throughout the day of shooting. This is quite rare for a photographer of his caliber.” Lowe, 26, has been in the spotlight since her teen years, earning It Girl status in England for her cool style, successful modeling career, thriving social life, and pedigree. She’s the progeny of Bush frontman Gavin Rossdale and British indie singer-songwriter and designer Pearl Lowe. She has starred in countless music videos and occasionally spins DJ sets, but hasn’t yet dipped into her gene pool to pursue a full-time career in music. She’s the face of Rodial makeup and American Eagle in the U.K., and her first cookbook, Sweetness and Light, came out last year. Lowe also has a small role in the upcoming movie Tulip Fever alongside another über-cool London girl: model Cara Delevingne.

A former photojournalist, Williams has immortalized some of the world’s most recognizable faces, including Robert Downey Jr., George Clooney, and Daniel Craig. He pioneered a technique that blends still and motion images, called motos. For this project, he used an Epic Dragon camera, which is also used by NASA aboard the International Space Station. “We shot the photographs on this amazing monochrome black and white camera,” he says, “and the pictures come to life like works of art; they just move and breathe.” It was an ideal fit for the Joshua Tree locations, which Williams describes as an “alien landscape” and a “photographer’s dream.” Daisy Lowe by the windmill farm in Palm Springs.

“It does feel like a different planet,” says Lowe, who has visited the desert several times. “I’m a Londoner. I live in the city; we’re always surrounded by technology, people, and lights. There’s something incredibly rebalancing about being here.”

The landscape isn’t the only thing that draws Lowe to the area. She will be back for the Coachella Valley Music and Arts Festival. “I usually come in for the first weekend, as timing is better with my work schedule,” she says. “I do have friends who go for the second weekend, so maybe next year I’ll visit a little later. I’m told that there is a different vibe and feel to the second weekend. I would love to experience that.”