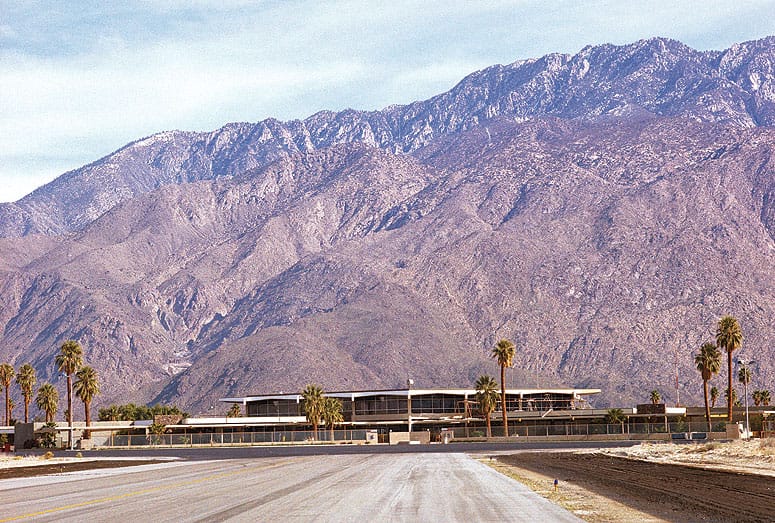 It began as a single dirt runway in the 1920s, grew and changed with the city of Palm Springs, and now thrives as a chic, tourist-friendly airport with international connections, world-class art, and a laid-back ambiance that epitomizes the desert lifestyle.

Harold (Hal) Williamson, a pilot, historian, and past president of Palm Springs Air Museum, says brothers Wesley and Early Gray laid out the first airstrip next to Prescott T. Steven’s El Mirador Hotel shortly after it opened in 1927. “It was mainly used by early aviation pioneers and army and navy cadets from March Airfield and San Diego,” Williamson says. “The army and navy cadets had a rivalry — they would go into the hotel café, each group insulting the other group. It had a negative impact on the hotel’s clientele.”

In an interview with the Palm Springs Historical Society, longtime resident Clarence Macy recalls: “[Wes Gray] had these navy friends, and he got into a battle with P.T. Stevens [who was] giving him a hard time about this airport being here because of the dust and the sound. … Gray invited a group of his friends with these airplanes down and he got them to turn the airplanes around and warm the airplanes up, and they gave the El Mirador Hotel the worst dust job you ever saw.” In frustration, Stevens built a new airstrip with two hangars behind the hotel, near the current location of Raymond Cree Middle School. This new strip, used until around 1934, boasted the city’s first commercial service, from Maddux Airlines on its Los Angeles/Tijuana loop. The airline stopped in Palm Springs only when its passengers made the request.

“Palm Springs became important because of fog on the coast,” Williams says. “Instrument flying was relatively new, so Palm Springs became a relief airport for Los Angeles. People landed here and spent the night when they couldn’t get into L.A. It’s one of those little things people don’t think about, but it had a significant impact on the history of Palm Springs.”

By the early 1930s, the Palm Springs Chamber of Commerce “began to realize that air travel was becoming more and more popular and Stevens’ landing strip was primarily serving El Mirador,” Williamson continues. “The chamber wanted to attract larger aircraft, so they started looking for a newer and larger airport.”

The chamber leased land on Section 14 from the Agua Caliente Band of Cahuilla Indians, and a third airstrip was born. It had two runways and was bounded by Alejo Road on the north, Avenida Caballeros on the west, Tahquitz Canyon Way on the south, and Sunrise Way on the east — only a few blocks from the heart of today’s downtown. The only navigational aide was a windsock. One of the early aviation pioneers who used the little spot was Jacqueline Cochran, considered one of the most gifted racing pilots of the time. In 1949 she founded the Coachella Valley chapter of the Ninety-Nines, a close-knit group of women pilots. Cochran was the first woman to fly faster than sound, and was director of the Women’s Airforce Service Pilots during the war. The Jacqueline Cochran Airport in Thermal bears her name today.

Palm Springs Airlines, owned and operated by Marie Toretsky and Arnold Werner, had its home here, starting out with one four-passenger plane and adding another in 1937. The next year, Palm Springs was incorporated as a city, and the airport was named Palm Springs Municipal Airport. As years passed, American Airlines and Western Airlines began making frequent stops at the Section 14 airport and the Village of Palm Springs grew around it, Williams says.

In early 1942, a few months after the attack on Pearl Harbor launched the country into World War II, the Army Air Corps subleased land on the site of the present airport and built runways, fuel stations, and fences and installed runway lights. The new field — Palm Springs Air Base — was used for training, aircraft maintenance, and as a receiving area for wounded soldiers bound for El Mirador Hotel, which had been converted to serve as Torney General Hospital. The new location was a great improvement over the older one, which was generating increasing noise and dust in a more populated area.

Palm Springs Chamber of Commerce and the Agua Caliente Tribe of Cahuilla Indians tribal council worked together to negotiate a 25-year lease for 600 acres in Section 18, due east of the Section 14 airport.

After the war, the Army Air Corps returned Palm Springs Air Base to the city, which then leased the facility to Mary Nelson and her Palm Springs Airport Corporation. A group of local business people, under the name of Aero-Palm Springs Inc., and headed by aviatrix Zadie Bunker, picked up the lease in 1952, and a new era of air travel opened in the desert.

That year, Western Airlines and the Palm Springs Chamber of Commerce joined with other chambers to fly to 36 northern cities, encouraging visitors to fly south for a “second summer where sun spends the winter.” Civic leaders and a TV starlet playing the role of “Miss Sunshine” made 69 personal appearances, gave 52 radio and TV interviews, and reached more than 6 million people.

In 1954, Western Airlines started daily “through” (nonstop) service on a four-engine DC-6 B plane between Palm Springs and Seattle, so that passengers didn’t have to change planes in Los Angeles. In 1955, 11,189 passengers traversed through the Palm Springs Municipal Airport.

Lee Arenas v. United States, a landmark 1944 Supreme Court case, gave the Agua Caliente Band of Cahuilla Indians the legal right to have their land allotments approved. Before then, tribal members could only enter into short-term leases and were barred from selling their land. It took until 1959, when President Eisenhower signed the Land Equalization Act, for these rights to actually take effect. The end result was a win for the tribe as well as the city.

In 1961, 83 percent of the voters in a special election approved a $3 million bond issue to purchase land for the airport and make improvements at the facility. More than half of the 6,636 registered voters voted. Afterward, City Manager Daniel Wagner called the airport the city’s “lifeline to the world,” and said, “The people of this city have given a clear mandate — that the city develop the airport to return the maximum to the taxpayer.” The city paid $1.5 million for almost 600 acres of tribal lands — the major part of the existing airport property. That year, the first airport commission was formed to operate the airport, with Lester Selig, Ed Dillon, Tom Kieley, F. Gillar Boyd, and Hardin Hart, Jr. serving as the first commissioners.

Palm Springs architect Donald Wexler, known for his midcentury modern architecture and use of steel in building construction, designed the new terminal, which opened in 1966. By 1967, there were 24 daily flights, and a six-story-tall control tower.

Wexler’s philosophy about air travel became a guideline for improvements at the airport over the years: “Passengers have been forgotten in the air age. We have sought to design this building for the passengers, not the planes. It’s a new concept for a facility of this size.” The buildings form an X, so that passengers can see where everything is from one corridor, without the need for confusing directional signs.

By 1969, it was evident that the runways were too short to accommodate the newer jets and large commercial airplanes, especially in the hot summer months when air pressure makes a longer lift-off necessary. Between 1973 and 1982, an $11 million renovation took place, expanding and improving the airport with new runway lighting, taxiways, and fire stations. By 1979, annual passengers had reached 600,000.

The runways were lengthened again in 1998, and that same year, the first non-stop international flight arrived on Alaska Airlines from Vancouver, B.C. The following year, a U.S. Customs official was stationed at the airport to cater to the high number of international corporate and private jets departing and landing, and the airport got its present moniker: Palm Springs International Airport. Top feeder markets in 1999 included Seattle, Chicago, and Portland.

A new concourse opened in 2007, bringing the total number of gates to 16. In 2011, smartertravel.com named Palm Springs International Airport one of “America’s top 10 most stress-free airports.” A massive piece by world-renowned glass artist Dale Chihuly is the centerpiece of an airport that gives travelers a welcoming glimpse of the desert lifestyle. Beautifully groomed outdoor patio seating areas, play areas for children and pets, a wine bar with California vintages, a bakery, Starbucks coffee, gift shops, newsstands, and a PGA Tour merchandise shop all contribute to passenger comfort.

As the desert grows, so grows Palm Springs International Airport. Eleven airlines now connect to more than 500 cities worldwide, with nonstop flights to 10 major air travel hubs. A new control tower representing a major upgrade in technology has just opened, more open parking spaces are planned, and a covered parking structure will be built on the site of the old tower. In 2012, more than 1.7 million passengers used the airport, and the traffic counts are growing steadily.