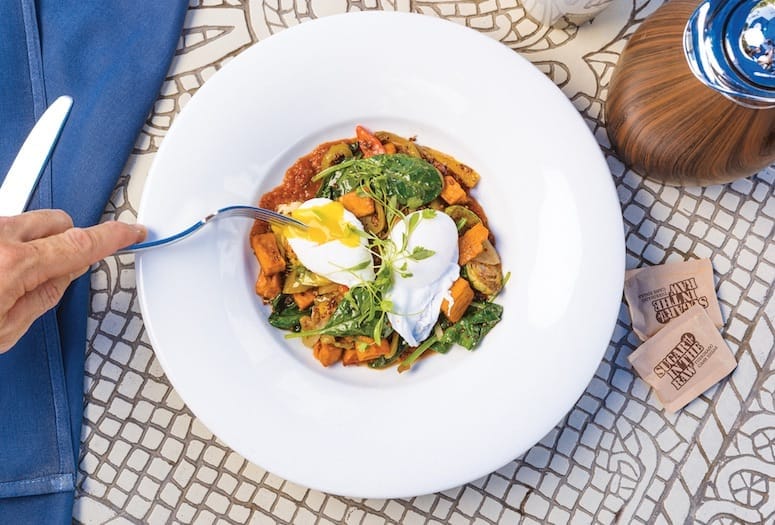 Have you heard about the bowl trend? Not the retro haircut or America’s favorite pastime involving an alley and pins — we mean food bowls: multilayered meals usually heavy on healthful ingredients with varying textures like grains, proteins, and colorful veggies that you can customize with seasonal produce and a mix of flavor profiles and global influences. Photos of these bombshell bowls have become a social media staple as foodies drool over the vivacious variations created around the world.

“The bowl trend has exploded,” says Nicki Sizemore, author of the cookbook Build-a-Bowl: 77 Satisfying & Nutritious Combos and the blog From Scratch Fast, “and it is very much in line with a healthy eating trend as well as with the meal-prep trend since most bowls involve incorporating fresh vegetables, herbs, and spices and things that are nutritious and vibrant. A big element about bowls is that they’re beautiful and fun to look at, and that visual component influences how we taste. It’s a fun way for chefs to showcase their skills and their creativity as well.”

Chefs in the Coachella Valley are getting bold with bountiful bowls. Here’s the story behind three cool, colorful, custom-made creations by culinary masters from Palm Springs to Indio. 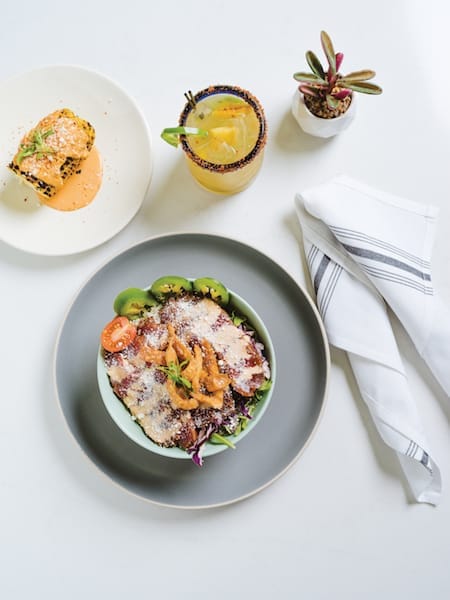 Customer demand prompted Hubka to add a trio of bowls to her Baja-style menu during the pandemic. “People were calling and asking if we had bowls on the menu last summer during the takeout revolution,” she recounts. “They travel really well. They’re easy to eat and user-friendly. You can get a bowl and eat it at your desk while you’re working or bring it home and easily reheat it.”

All three bowls she offers (there’s a pollo asado bowl with grilled chicken and a rotating catch-of-the-day bowl, too) are rice-based, with the ahi bowl coming over cilantro-lime jasmine rice. “I feel like having a grain makes it a more satisfying and a more filling meal as opposed to a salad, but people can swap the rice out for lettuce if they do want more of a salad. It can go either way.”

Like many items on the Tu Madres menu, the ahi bowl is both seafood-centric and reflects an Asian-Mexican fusion of flavors. The blackened ahi serves as the protein and is accompanied by cucumber, arugula, and Fresno peppers, then topped with cotija cheese, a soy aioli, and crispy wontons for a final crunch.

Bowls were supposed to be temporary offerings during Tu Madres’ takeout-heavy days, but the feedback was so positive that Hubka made them permanent additions. “The nice thing is we can run different specials because a bowl is such a blank canvas. I don’t think they’re a flashy trend. They have staying power.” 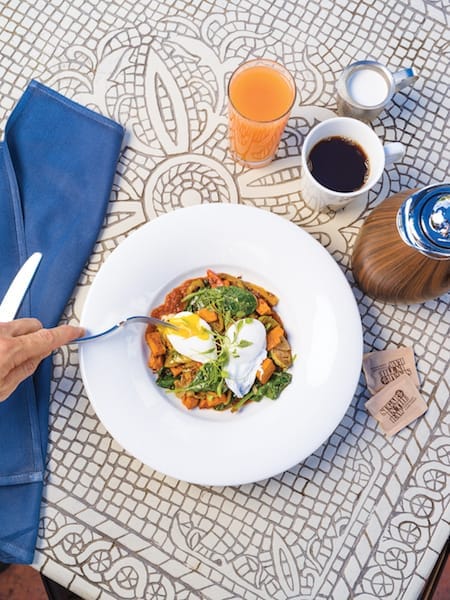 Last year, the COVID crisis inspired Cooper to add more healthful items to the resort’s menus, including this bowl layered with locally sourced veggies, quinoa, ranchero sauce, and poached eggs. “We wanted to incorporate more grains and more nutrients, not just during COVID but as way of life, living a more healthy lifestyle,” he explains. “It’s inspirational to have indulgent food that’s actually good for you as well a filling and nutritious. Guests are asking for more vegetables, and we wanted to incorporate that at breakfast.”

While the bowl’s veggie lineup currently includes sweet potatoes, Brussels sprouts, spinach, bell peppers, and micro cilantro as garnish, Cooper may swap ingredients depending on the season, focusing on produce he sources within a 100-mile radius.

“In the fall, you have all the different squashes and root vegetables,” he says. “You could easily swap in kale, chard, any type of leafy greens. It’s fun to play with what’s in season. It’s all about communicating with your farmers and local purveyors about what are the freshest possible ingredients right now.”

Because looks matter, Cooper has combined bright veggies with the deep-red ranchero sauce and pretty poached eggs to create something that’s as artful as it is delicious. “That has to be a high priority because you have to eat with your eyes as well,” he says. “It has to look appealing. It has to taste appealing. It has to smell good. All your senses play a role.” 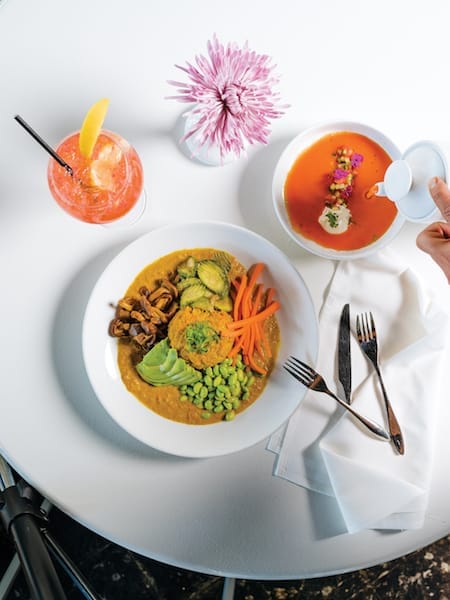 The Marcro Bowl at Eight4Nine.

When one of the restaurant’s servers went vegan and lost 60 pounds, she encouraged Gonzalez to look into creating a plant-based macro bowl — a dish showcasing a balanced mix of macronutrient groups carbohydrates, protein, and fat. Gonzalez was game. He dove into researching macro bowls and wanted to come up with a dish that was as comforting as his simple and satisfying childhood favorite arroz con pollo but centered around good-for-you fresh vegetables, layered with a mix of textures and tastes. “I wanted to blend flavors that would go well together,” he says, “and I wanted the bowl to have a variety of cuisines in one.”

Gonzalez started by focusing on ingredients the restaurant was already using in other dishes. He grabbed some protein-packed edamame and good fat-laced avocado from the edamame-avocado-hummus toast as well as house-pickled shitake mushrooms used in the brunch menu’s frittata and eggs benedict.

He added steamed brown rice that’s served in Eight4Nine’s long-running ahi poke bowl, and recreated the recipe for a Vietnamese-style curry sauce that he previously made for a curry-cauliflower bisque, rounding out the bowl with julienned carrots and pickled Persian cucumbers. The result: a healthful, balanced meal that’s become a top seller since the dish was added in July.

“With new items, I go around the dining room and ask each individual about their meals because I want to hear feedback,” he says. “People love it. There aren’t so many interesting vegan options out there that are just plant-based food. Real food that’s not compressed this, or seitan, or an Impossible burger. I love to do food that you can recognize and see what it is and taste what it is.”