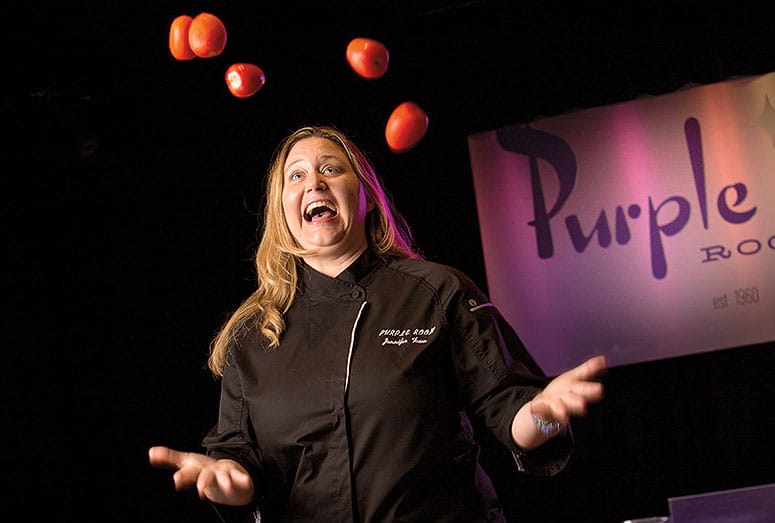 “My love for cooking started when I was 15,” says Jennifer Town, the new executive chef at Palm Springs’ Purple Room. “That was when I went back to Italy, where I lived until I was 5, and stayed with friends of my parents, who cooked the most amazing food, including a dish with just four ingredients — zucchini, olive oil, basil, and salt — that just blew my mind.” Today, Town brings that garden-fresh sensibility into the Purple Room kitchen and onto a 21st-century menu that recalls the glory days of the midcentury supper club. We recently caught up with the 37-year-old chef — who gave up a future in international relations to work in kitchens in Italy, St. Thomas, Torrance, and now Palm Springs — to discuss her new menu, as well as her love for microbrew beers, fresh fish, heirloom tomatoes, and what she loves most about living in the desert.

How do you define supper club food?
Supper club food should have more variety than, say, a steakhouse. I remember when my parents would go out to the supper clubs and my mom would say things like, “We’re going out to have lobster and crab.” So, I put lobster and crab on the menu, along with braised short rib. I try to make the dishes a little bit more special, something for the people to enjoy while watching a great show.

You redesigned about 95 percent of the menu at the Purple Room. Tell us about your process.
I actually looked back to the old supper clubs menus from the ’50s and ’60s just to get ideas, and then I put a twist on them. For example, instead of using a thick egg-based béarnaise sauce on the Filet Oscar, I use only butter and fresh tarragon. I also like to do a pan-seared trout with crab vinaigrette and top it with sliced almonds. In planning the menu, I begin by first writing down a few ideas and then let them percolate for a few days while I think of fresh, new ways to present them.

What are some of your signature dishes?
I like the halibut, which I top with a fennel, red pepper, and olive relish. This surprises a lot of people, because it is more expected on a chicken dish. But the halibut stands up to it, and I think it pairs really well. And, of course, my short ribs. I think braising is one my favorite things to do. It’s a long process, and you have to put so much love into each step, from marinating overnight to searing the meat the next day and roasting it slowly so it falls apart and is perfect.

You studied international relations at University of Southern California. How did you end up in the kitchen?
Even as I was attending USC, I’d read cookbooks and foodie magazines like Bon Appétit. I tried to find the most difficult thing to make and would have dinner parties for all of my friends. Then during Christmas break, while visiting my father in Vermont, where it was about negative 15 degrees outside and there was nothing else to do but cook, I knew that cooking was what I wanted to do full time. I took a tour of the New England Culinary Institute and had the epiphany that this is what I have to do. The next month, I was enrolled.

What do you like to do when you’re not cooking?
I like to go to other restaurants and see what other chefs are doing. I call it “research.” [Laughs.] I also like to hang out with friends and go to the Coachella Valley Brewing Company. I’m actually a craft beer fan, and I plan to do a couple of big craft beer dinners at the Purple Room, where we will pair four courses with four beers. Every second Tuesday of every month, in fact, we do some sort of a pairing dinner, with wine, beer, or bourbon.

Aside from the Purple Room and its sister restaurant, Trio, what are some of your favorite restaurants to visit in the Palm Springs area?
I really like Copley’s. I think they do a great job. I also like Ristorante Mamma Gina in Palm Desert, because I grew up in Italy when I was younger, and I worked a kitchen there. I’m usually very picky when it comes to Italian, because I know I can make it better at home. But they do it fabulously.

Whom do you consider your career mentor?

I’d have to say Christine Brown at Restaurant Christine in Torrance. She won the Zagat award several times for Best Restaurant in the Los Angeles area and is really into California cuisine. In school, we learned French techniques, basically butter and cream … and butter and cream. But being by the beach, Christine prepares foods a little lighter.

What’s your favorite ingredient to cook with and why?
Heirloom tomatoes. I know they're a little bit cliché, but when they are ripe from the farmers market, you can literally eat them like a peach. Put salt on them, and lean over the kitchen sink and just take a bite out of them. They are just so delicious, and there are so many kinds. I also like cooking with fresh fish, and I definitely learned that while working in the Caribbean.

What do you love most about living in the Coachella Valley?
There’s a great sense of community here, and our views are gorgeous. I actually like the hot weather. When I was working as in intern in Italy, I was up in the Alps and there was no heat in the kitchen. I was pretty much in a little dungeon with the space heater. I remember promising myself, “I’m never going to be cold again. I never want to be cold again.”