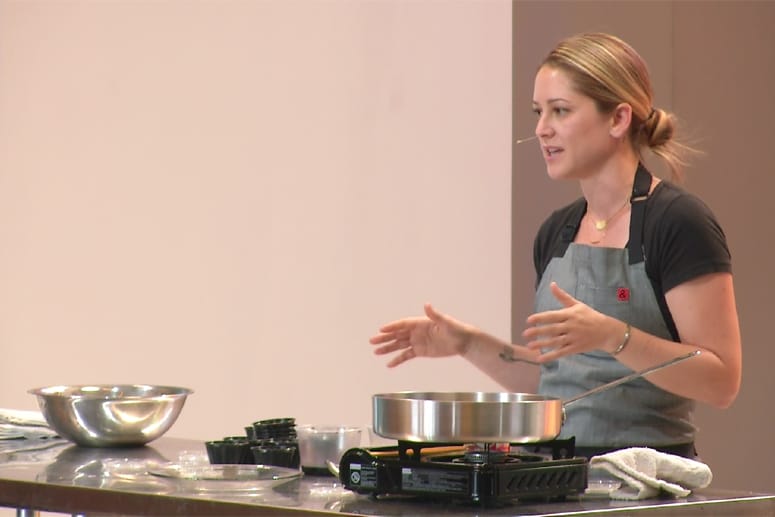 To kick off the Food & Wine Festival Palm Desert™  there was a a four-course gourmet luncheon featuring James Beard-recognized chefs, including David LeFevre, Brooke Williamson, Matthew Accarrino, and Gale Gand, with premium wine pairings for each course.

In this video, each chefs explains the dishes they made at the Food & Wine Festival Palm Desert™ James Beard 4-Course Luncheon.

Chef David LeFevre, a native of Madison, Wisc., and graduate of the renowned Culinary Institute of America, began his professional culinary career as an intern at Chef Charlie Trotter’s celebrated restaurant in Chicago, where he steadily rose the ranks over the course of seven years — punctuated with stages in France including the late Bernard Loiseau’s restaurant, La Côte d’Or, Restaurant Jean Bardet and Roger Vergé’s Le Moulin de Mougins

Matthew Accarrino is the nationally recognized chef of SPQR in San Francisco, CA. Born in the Midwest and raised on the east coast, he moved west to California in 2007. His unique culinary style draws inspiration from his Italian heritage, personal experiences, and classical training with some of America’s best chefs, coupled with his embrace of the bounty of opportunities that California ingredients present. With a strong belief in direct sourcing, Accarrino endeavors to play a role in the growing and development of many of his ingredients.
Visit the SPQR website »»

Brooke Williamson’s life has always been about food. Since she was a young girl, the chef dreamed of becoming a chef or restaurateur, which eventually came true in the form of successful ventures including Amuse Café, Beechwood, and most recently, Hudson House, The Tripel, and Playa Provisions (slated to open in January 2014) with fellow chef and husband Nick Roberts.
Visit Chef Brooke Williamson's Facebook Page »»

Gale Gand, partner and founding Executive Pastry Chef of the Michelin-starred, Five Diamond, four-star restaurant TRU in Chicago, was named Pastry Chef of the Year by The James Beard Foundation and Bon Appétit magazine in 2001. Host of the long running Food Network and Cooking Channel’s Sweet Dreams, the network’s first all dessert show, Gand has appeared on Iron Chef America, Martha Stewart, Baking With Julia (Child), and Oprah, and has judged Bravo’s Top Chef and Top Chef Just Desserts, among others. Gand’s credentials earned her an invitation from Mayor Daley to create a special dessert to serve to the President of China on his 2011 visit to Chicago.
Visit Chef Gale Gand's website »»