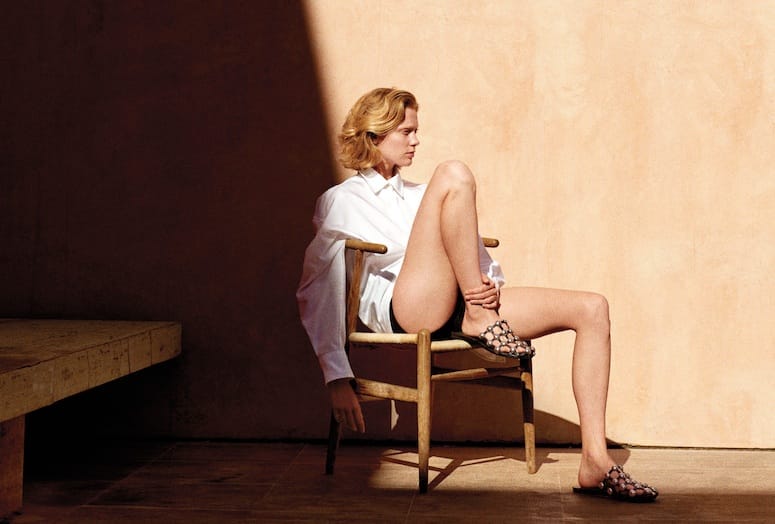 Worn by both peasants and emperors, the sandal is the original air-conditioned shoe.
PHOTO BY JULIA NONI

I have a friend who finds sandals unseemly. Even on the most sweltering Palm Springs day, you will see her in a pair of sparkly Converse or maybe some old-school black-and-white Adidas Superstar sneakers. It’s the sight of human toes that bothers her. Good thing she’s a thoroughly modern, otherwise well-adjusted woman, because if she lived 8,000 years ago, she would have been out of luck. Although easily found on modern fashion sites from Souliers to Polyvore to Farfetch to Abercrombie & Fitch, and in any brick-and-mortar store from El Paseo to New York’s Fifth Avenue, sandals are the most ancient form of footwear — the very first form of footwear — as old, in fact, as King Tut, who used his fancy king sandals as a “kingholder” when he was momentarily off his throne.

The sandal has a global origin story and appears as the first foot-covering depicted across almost every culture. Archaeological findings have turned up sandals presumably worn 8,000 years ago by the Anasazi people in the American Southwest. Long before a pair of used hot pink Versace sandals would set you back almost $1,000 on 1stDibs, sandals were made from wood, leather, textile, straw, metal, stone, buffalo hide, repurposed tires, and, in Pakistan and Afghanistan, a tent of fabric decorated with the region’s famous embroidery. Although Birkenstocks were dubbed “Jesus cruisers” in the 1970s and then rose in popularity again with college students in the 1990s (I wore mine with thick Norwegian socks, all extant photographs of which have been destroyed), and it’s true that the historical Jesus likely wore a similar type of shoe, it wouldn’t have set him back a full paycheck of shekels.

Sandals are also, despite the modern high-end price tags, a democratic shoe, worn by people of all socioeconomic means. The very poorest of the poor were wearing sandal-like footwear by 30 B.C.E., and this is still the case around the world today.

If you think sandals are popular only among people in hot climates (for example, the sound of flip-flops hitting the pavement in the morning is as certain as a rooster crowing at sunrise in cities like Seoul, Windhoek, Dubai, and Coachella), you might be surprised to find out people in cold-weather climates bare their toes too. 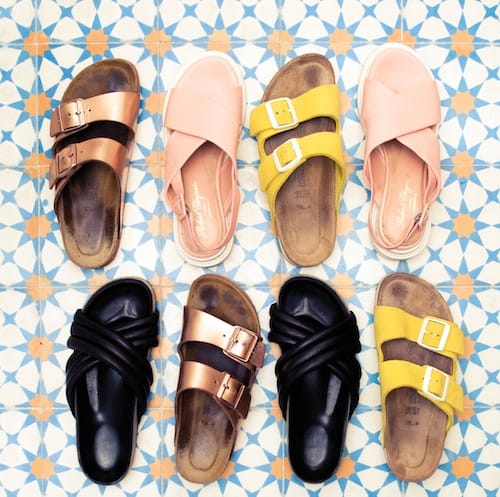 PHOTO BY COVETEUR
The sandal section of your wardrobe should contain something for every occasion. You can even be forgiven for owning a pair of Birkenstocks, the German sandal introduced to the U.S. in 1966 and discovered anew by every generation since.

Wooden-soled sandals (geta, a kind of clog) are worn with socks in Japan as well as the European countries, like Denmark and Sweden, with which they are more commonly associated. Dansko even makes a vegan sandal-clog hybrid for those whose morality and conscientiousness extends to the composition of their footwear.

Thick soles, curved soles, rolled toes, and other ingenious shapes allowed people of various North African climates to work and move easily in a more breathable shoe, depending on how they were making a living and the surfaces on which they walked. The Greeks and Romans loved to name all manner of things (types of love, wars, gods, etc.), so they kept very accurate records of different shoe types and styles; in fact, the word “sandal” derives from the Latin sandalium — there’s a reason why those toga Halloween costumes come with a pair of sandals. Artwork from this period almost always shows saints or important figures bedecked and be-sandaled, sometimes with a halo, and sometimes not. In that sense (though the word icon is ridiculously and inappropriately overused), the sandal is truly iconic, as it appears on the feet of actual religious icons.

The popularity of sandals took a dive around the seventh century, as the newly established Christian Roman Empire agreed with my friend, believing it immodest (read: gross) to show your toes around town or in mixed company, so only the monks got to wear them, shut safely behind their monastic walls. The French Revolution also revolutionized — or revivified — a sandal-wearing public. And when women started wearing those overpriced “beach pajamas” now sold on Etsy for almost $200 a pop, they paired them with sandals as well. When the dance halls of the 1930s became popular, a comfortable, breathable shoe was absolutely necessary to get your groove on.

Women in the United States were donning sandals in the 1950s, although early styles favored straps that blended in with the shade of the skin, creating the illusion of being barefoot. Men didn’t start wearing sandals until the 1960s, when everyone started doing all kinds of things previous generations would have never considered doing. This development could be positive or negative, depending on your perspective.

Sandals are also, despite the modern price tags, a democratic shoe, worn by people of all socioeconomic means.

You might say flip-flops and sandals have come a long way, but in fact, their high popularity and even higher price tags actually bring the footwear trend full circle. Just as King Tut once wore “slides,” you’re just as likely to see a hundred-plus-dollar pair of flip-flops paired with a glamorous gown in a glossy women’s magazine photo shoot as you are to see them on any number of sun-burned tourists from Minneapolis or upstate New York, when you can wear sandals for exactly five seconds during the increasingly brief summer season, or gleefully walking the Palm Springs streets with a requisite straw hat. Just add a toga, and that dude strolling past Just Fabulous could be on his way to the ancient Roman senate.