For the Love of Dog, Lori Weiner, owner The Ritz at Barkingham Palace 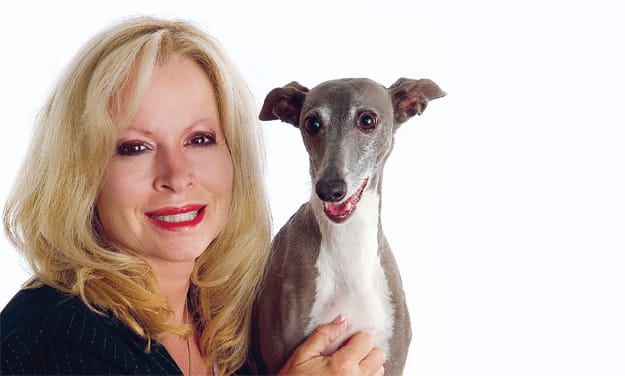 While many first pets are goldfish, hamsters, or turtles, Lori Weiner’s first pet was a decidedly sophisticated one: an Afghan hound named Rembrandt. About 12 years ago, she got her first show dog (a borzoi). Today, she and her husband, Marty, own four Afghans, two Italian greyhounds, a borzoi, four horses, two parrots, and two sharks. One of the Afghans, Dino, stars in Lori’s imaginative books: Dino Vicelli Private Eye and Vicelli Goes to Washington. In mid-February, the Weiners opened The Ritz at Barkingham Palace pet hotel and wellness spa in Palm Desert.

The dogs, parrots, and sharks share your home in Palm Desert. What about the horses?
We got them about three years ago from the Finger Lakes Thoroughbred Adoption Program, which rescues former racehorses from slaughter. We flew to New York and bought two, then went back and bought two more. They live at Rancho Polo in La Quinta. I’m a big animal person. I want to save them all, but it’s hard to do that.

What was your vision for The Ritz at Barkingham Palace?
My dogs at home have their own air-conditioned rooms with their own beds. I wanted a place that would be one where I would take my own dogs. I wanted them to have television, couches, and beds to feel like they’re at home.

Out of your seven dogs, why did you single out Dino to star as the protagonist in your books?
Dino is very inquisitive. I could just picture him as a private investigator. He is the only one of our dogs that is not a show dog. He’s too tall to be meet show regulations. Although he’s the oldest at 11 years, he’s my baby. He’s also a cancer survivor.

Is there another Dino book in the offing?
I’m working on the third book in the series; it will have something to do with Hollywood. Between the two Dino books, I started a serious mystery, Murder and Chains. It’s based on a family in New England that owns a chain of department stores. It does have a Christian theme to it.

Now that you’ve got The Ritz at Barkingham Palace up and running, what’s next?
We’re buying adjacent property to develop an obedience and agility training facility that can be used to host fundraisers for animal-based charities. The new property will also house a veterinary office.