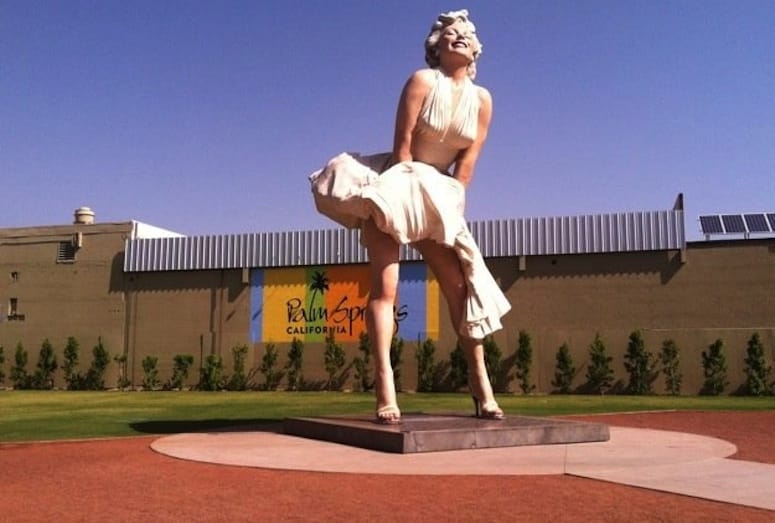 Forever Marilyn will occupy its downtown Palm Springs location until the end of March, and then head to New Jersey.
Jim Powers

The 26-foot Forever Marilyn statue that has adorned downtown Palm Springs since May of 2012 will officially leave at the end of March, according to a release from P.S. Resorts, a non-profit organization that promotes the city's tourism.

Just a month ago, Palm Springs Mayor Steve Poughnet said during his state of the city address that plans were in the works to buy the 34,300-pound sculpture, according to a locally produced article.

Marilyn was originally slated to leave at the end of June 2013, but two extensions granted by sculpture's owner pushed the departure date back to March.

For her next destination – Hamilton, NJ – she might want to bundle up based on the winter to sock the east coast this year. Marilyn will anchor a lifetime retrospective exhibition and gala honoring its creator, 84-year-old artist Seward Johnson, at the 42-acre sculpture park Grounds for Sculpture.

The exhibit will include more than 150 of Johnson's sculptures displayed in three interior museums and throughout the gardens of the parkland. The show will start May 2 and last through September.

From there, it's hoped Marilyn may come back to Palm Springs as she has no bookings after the exhibition. However, there is a long list of cities that want her, like Sinapore, Shanghai, Brazil, Miami and Rome.

Palm Springs will hold a free goodbye party at 6 p.m. March 27 in conjunction with the 23rd anniversary of Village Fest. Details of the party are forthcoming.