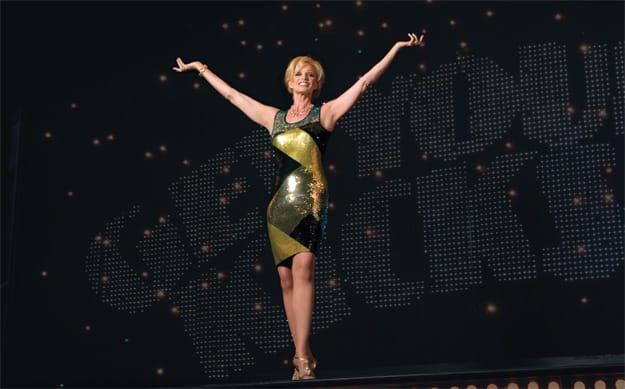 Sitting in her dressing room after a May performance of The Fabulous Palm Springs Follies, Susan Anton relaxes before what she expected would be an uncomfortable part of her guest-starring role. The traditional after-show greeting of patrons, however, turned out to be her favorite aspect of the musical revue.

“Usually you finish a performance and you part ways,” she says. “I thought it was going to be really awkward. Then I started meeting the people and having these amazing conversations.”

Anton headlined the Follies earlier this year and was invited back for the 19th season’s holiday show, running through Dec. 31. She’ll be singing her favorite holiday tune: I’ll Be Home for Christmas, which she says reminds her of her father during World War II and which is particularly apropos given the fact that she lives in Las Vegas and her family lives near here (her mother in Calimesa, her sister in Temecula, two brothers in Yucaipa and Victorville, and another brother working for an apple farm in Oak Glen, where family still owns property).

At the age of 58, Anton maintains a successful stage career. Over the years, she also has performed in films and on television; she even had her own variety show on NBC in 1979. Her earlier public performance was as a third-grader beating four other competitors in a talent show with her rendition of Liszt’s Hungarian Rhapsody on piano. She only took three or four months of piano lessons, though her mother told her she would regret giving them up. (Her reply: “Mom, I would rather ride horses and chase boys.”)

As a teen, Anton relied upon her voice, singing “If I Fell For You” in the talent portion of the Miss Yucaipa beauty pageant. After winning that title, she went on to win the Miss Redlands (1968) and Miss California (1969) pageants and was second runner-up in the 1970 Miss America pageant.

“After I became Miss California, I was put with a vocal coach who said, ‘You already are breathing right and doing it by the book. … The only thing you need to do is find your own style.’ Only in the last year have I really started to find out who I am,” Anton says, referring to her efforts to please her parents and thus conforming to their preference for 1940s music. “I love the music from the ’40s, but it’s the music from the ’60s that really has my heart,” she says.

While the pageants led to her decision to pursue a career in entertainment, the path to fame was not entirely strewn with roses. “It didn’t matter to people in Hollywood that I had a crown on my head. If anything, it played against me. Beauty queens weren’t in,” Anton says, adding that “earthy types” were more in favor at the time. Then in college, she and her high school boyfriend cleaned Pasadena offices in the middle of the night to make money. “It was humbling — and a great, valuable lesson,” she says.

Eventually, she started breaking into commercials. Then Edie Adams retired from her role as the Muriel Cigar Girl. Anton and two other girls were chosen to compete to be Adams’ successor. “The three of us went to New York. Each shot a commercial,” Anton explains. “They aired it on the NFL. The public then voted. … If you picked the winner, you got a ticket so you could win a Corvette. My mother was out like a campaign manager on fire. I was voted in by a landslide. … I think Yucaipa had a lot to do with it. That’s when things really turned around for me.”

Anton also credits Merv Griffin, who lived in La Quinta before his death in 2007, with much of her success. “He was so generous with his program [The Merv Griffin Show],” she says. “He had me on his show every other week.”

From her own variety show, she particularly recalls singing “Chances Are” with Johnny Mathis. But her favorite part of the program was the segment where she returned home to Oak Glen for interviews with her family or to visit the one-room schoolhouse she attended.

Anton’s favorite Broadway memory also involves family and occurred when she was performing in The Will Rogers Follies. “New York at Christmas is the most wonderful place to be,” she says. “I flew my mom and dad in to see the show and see New York. While they were visiting, the company got a call that the Kennedy Center was honoring [lyricists] Adolph Green and Betty Comden.” Though both Wally and Lou Anton attended the Kennedy Center performance with their daughter, only her father was able to attend a reception at the White House with her because her mother lacked her Social Security card. “We met the Bushes and had our picture taken in front of the Christmas tree,” Anton recalls. “Gregory Peck was there.” Peck knew Anton from supplying the voice of Florenz Ziegfeld in The Will Rogers Follies. He said, “Oh, I’ve heard about you,” when introduced to Wally Anton. “My dad was impressed,” she says. After that, Audrey Hepburn entered the room. “There was a sudden hush when she came in and ‘hovered’ above the crowd,” Anton recalls. “She radiated some kind of aura I have never seen before. That was the perfect moment.”

When Wally Anton died in 2002, his family honored the baseball fan with a fitting tribute on the occasion of a Dodgers vs. Angels game. During batting practice, they scattered (with permission) some of his ashes on the Dodgers Stadium field. “I sang the national anthem that day,” Anton recalls. “It was Flag Day, unbeknownst to me. I was introduced as Wally Anton’s daughter.” Military personnel lined the bases and Air Force planes soared overhead. “Then it was time to sing,” Anton recalls. “It was difficult, but I remembered what my dad said: ‘Remember that it takes a lot more than rope to keep that flag up.’ … We like to say that 52,000 people came to his memorial — and brought flags. He would have liked that very much.”

Two years ago, Anton brought her mother to see The Palm Springs Fabulous Follies for her 80th birthday. “I had heard about the Follies forever from my Aunt Joanne,” she says. “She brought employees from Wilshire Apple Shed. It was one of their big outings. I didn’t know what to expect. It was fantastic.”

More than once, the Follies had asked Anton to headline the show. After seeing it for her-self, she gladly agreed. “I don’t think people understand how big the show is, the production value,” she says. “It’s such a beautifully run show. The closest I have experienced the nature of it was from that school of entertainment when I was performing with George Burns at Caesars Palace.” Burns, she reports, would watch her from the wings, dressed in a smoking jacket but without pants (because he didn’t want to wrinkle them), and would say, “That’s my kid.” The Follies, Anton says, “is kind of a throwback to that time when there was a lot of glamour and camaraderie. I also had that with The Will Rogers Follies.”

Anton’s favorite song to sing is Bob Dylan’s “Forever Young.” “As I get older, the worlds inspire me more and more,” she says. “It holds a lot of history for me.” Part of that history, coming full circle, is Anton’s appearance in Palm Springs. While growing up in Oak Glen, she visited often. “It was a big treat to come to Palm Springs. When I was getting ready for one of the first pageants, we came to Palm Springs. This was where all the amazing shops were to get a special dress.” When she was in high school, she also was among the spring breakers who came to town. “It feels like home as much as any other,” she says.

Anton typically performs a holiday show in Las Vegas, where she lives, or in Atlantic City. But the Follies invited her to make a return engagement. “I was so thrilled because it’s my understanding it’s the first time they have asked an artist back in the same year,” she says. “I can’t think of anything better than spending the holidays with these tremendous crowds.”

A trip to the gym began Susan Anton’s journey on the road to love. Noticing how great Lesley Ann Warren was looking, she asked the actress what she was doing to get her glow. “She said, ‘I’m working with a life coach.’”

When Anton arrived at the life coach’s class, however, she set her sights beyond advice. “I looked to see if there was anybody I would hit on,” she says. There wasn’t. “But then [Jeff Lester] came walking in late and I thought, ‘Who’s that?’ We were in this course for a few months, and I had a real chance to get who he was. … I could see there was such a quality about him. … I asked him to go to Las Vegas, where I was performing in an arthritis telethon.”

Their wedding invitations told the story: “They met. They had a fight. She told him to go away. He didn’t.”

“I’m five years older. He was still a struggling actor,” Anton explains. “I was established. I thought, ‘I don’t know if I can deal with an out-of-work actor,’ but I just loved being with him. Thank God he was smarter, because I would have blown it.”

Lester did find work as an actor, playing Deputy Grady Spooner in Walking Tall, Captain Justice in Once a Hero, an FBI agent in Star Trek IV: The Voyage Home, and Lance Jarvis on Baywatch (in which Anton also had a recurring role). Today, he is a director.

“We established Big Picture Studios 14 years ago. I was under contract with Radio City Music Hall Spectacular [in Las Vegas]. … There was no high-end production company in Las Vegas. We decided to break ground and open a studio doing commercials for local businesses. … After five years, I told him it was time to start directing films. He had an idea for a short film. I said, ‘OK, I will produce it.’ He said, ‘I want my friend Billy Bob Thornton to be in it.’” Anton and Lester are now working on distribution for the feature-length Last Real Cowboys (“about two cowboys getting into a zen conversation”).

When they aren’t working, the couple — who celebrated their 17th anniversary in August — play golf, garden, and take their Wheaton terrier Joey for hikes in Red Rock Canyon.

“Every now and then, we go see a show,” says Anton, who then remembers to mention her own new show: Vocal Soup, which she says is “a little like the Rat Pack” with four singers performing a range of genres from Sinatra to rock and roll.