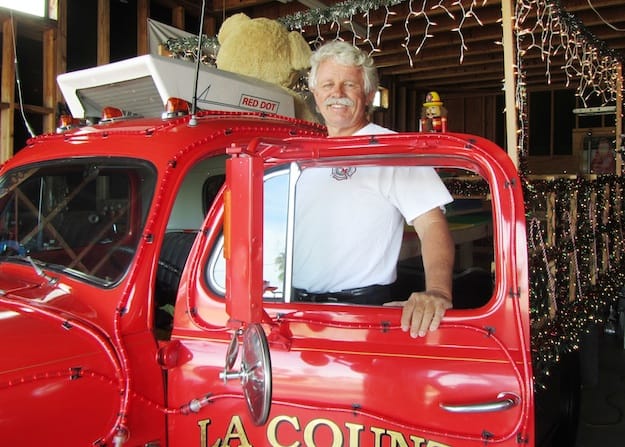 So when the Cathedral City Fire Chief asked him if he wanted to be in charge of the department’s entry in the very first Palm Springs Festival of Lights Parade, he said, “Sure.”

“I was hooked,” he said. He’s been in every Festival of Lights Parade since then.

The 21st Annual Palm Springs Festival of Lights Parade starts at 5:45 p.m. Saturday, Dec. 1. The route begins on Palm Canyon Drive and Ramon Road and ends at Tamarisk Road.  The parade is presented this year by the City of Palm Springs, P.S. Resorts and the Agua Caliente Band of Cahuilla Indians.

Now retired, Hammer decorates antique fire trucks from his personal collection. He can’t remember exactly when he started collecting firefighter memorabilia, but said like most collectors, you begin small and it grows from there.

“You start buying things like extinguishers, badges and helmets, and the next thing you know you’re buying a truck," Hammer said.

Right now, his inventory is down three trucks, and two will be in this year’s parade –  a 1948 and a 1949 Ford. Both will be decorated with net lighting in the back and rope lighting in the front. Hammer said during the first few years of the parade, float decorators were only allowed to use white miniature lights. Now, they can use any type of lights, including rope lighting and LED lighting that’s made a big difference.

Hammer’s trucks will sparkle with about 4,000 lights each, but don’t hold him to that number.

“If you really start counting,” he said, “you would probably find more than that.”

There are also nutcrackers, Santa Clauses, and a 5-foot teddy bear on one truck. With three adult children, their spouses, and six grandchildren ranging from 8 weeks to 11 years old, his trucks fill up fast with family.

The only thing about being in the parade, he joked, is you can’t watch it. Sometimes he thinks it might be fun to be a spectator, but admitted, he doesn’t see that happening.

“We do this because it’s about family and it’s an amazing way to start the holiday season,” said Hammer. “Especially when you see the kids along the parade route, and it’s not just the kids; it’s the adults, the older people. You go by, and they’re waving, and smiling, and you know you’re doing a good thing. I just can’t stop.”

“As long as I can drive a fire truck,” he said with a smile, “I’ll be in the Festival of Lights parade."