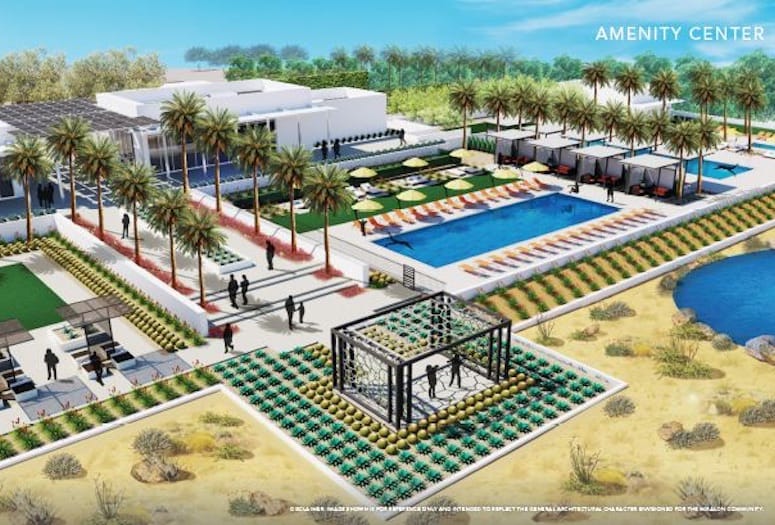 The amenity center will include a lounge, WiFi café, fitness and yoga center, two pools, a spa, and bocce ball courts.
RENDERINGS COURTESY OF FREEHOLD COMMUNITIES

In 2004, a large residential project of1,150 residences took shape on a plot of land in North Palm Springs. The developer graded the property and installed infrastructure such as streets and sewers and even a golf course. But the economic downturn of 2008 put a halt to any further construction.

The project, now called Miralon, has been revived by Freehold Communities, a master-planned community developer headquartered in Boston that is currently developing approximately 10,000 residential lots in Texas, Tennessee, North Carolina, Florida, and California.

The approach to the modernist-inspired amenity center.

And while the community will still have 1,150 residences — 752 single-family units and 398 multifamily units — the golf course is being repurposed as a large olive grove interspersed with hiking and biking trails and a series of social spaces, including shaded seating areas that will act as community gathering spots. 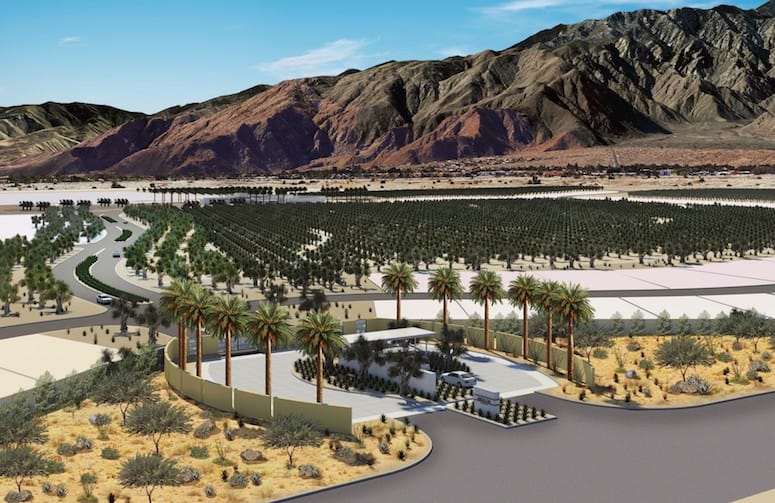 The 107-acre development, which will be located north of San Rafael Drive and bordered to the west by Indian Canyon Drive, has been planned as an environmentally conscious community with plenty of open spaces.

Shuckhart adds that work has already begun with exterior landscaping. The orchards and interior landscaping improvements are scheduled to begin in June. Freehold projects that the first homes will be available in late 2017 or early 2018, while construction of the community’s amenity center is slated to begin in the fourth quarter of 2017 and is expected to take 12 to 16 months to complete.

Homes will range in size from 1,100 square feet for the smallest attached units to more than 3,000 square feet for the largest single-family residences. “The design inspiration for all of the units was derived from the work of some of the desert’s luminary modernist architects including Donald Wexler and William Cody, whose collective creations left an indelible impression on Palm Springs,” says Shuckhart.

“All of the homes will feature classic, clean, modern designs with flat roofs and signature elements such as deep shade canopies, light gage steel post and beams, and large windows,” he adds. “Interiors will feature clean lines and modern amenities that meet the needs of today’s buyers.” Each home will also include a solar package as a standard feature.

Pricing for the homes is still to be determined.