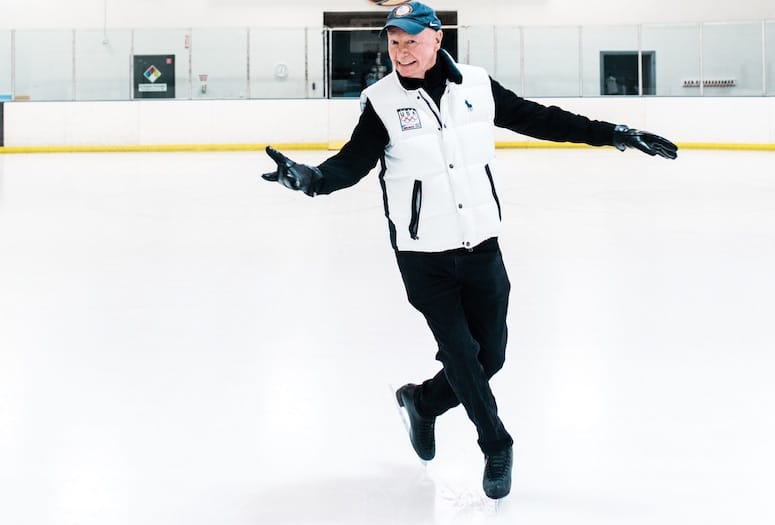 Well, “cool” in the sense that it’s not every day that you meet a guy who lives in Rona Barrett’s former abode (near Elvis’ famed honeymoon lair); or somebody who followed his childhood passion for ice skating back “home” in Worcester, Massachusetts, to become a national junior singles bronze medal winner in 1959 and 1960; or a gent who morphed into an Olympic gold medalist coach who has taught the likes of Linda Sue Fratianne, Michelle Kwan, and 2010 Olympic champion Evan Lysacek, to note only a few.

“I was blessed,” Carroll says. “Michelle was very young when she started with me. She won the national title nine times. Teaching her was a dream, and she was the best all-around skater I ever taught.”

Though he’s officially retired, Carroll, 80, still skates circles around his milieu — figuratively, that is. He coaches at Desert Ice Castle, a rink he and a pal nudged owner (and seven-time Aussie figure-skating champ) Anthony Liu to open several years ago. Carroll also mentors athletes for U.S. Figure Skating in Irvine twice a month.

“Ice skating has the greatest combination of artistry, athleticism, and music,” he points out. “There’s such beauty and movement and a feeling of freedom over the ice.”

In between, Carroll relishes life in the Coachella Valley. “I first came here for a modeling job, if you can believe it,” he shares.

“When I looked at the mountains, it was like a religious experience, and I was fascinated by the stories of the [Cahuilla] Indians and how the mountains were sacred to them. For me, this is my own little bit of paradise.

Le Vallauris Restaurant, Palm Springs’ standout French venue, because, “While I like to walk around in flip-flops here, it’s also great to put on nice clothes. It’s a throwback of sophistication for me.”