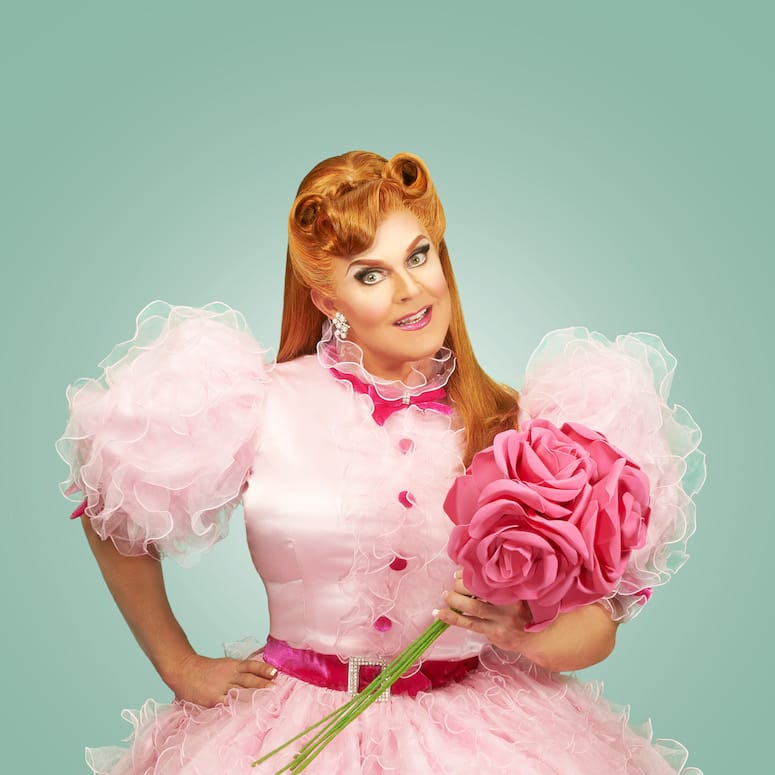 Unless you’ve been hibernating in an underground bunker without a wireless signal for the past decade, you’re undoubtedly aware that drag has been having a dynamic moment in pop culture. RuPaul’s Drag Race and Pose are among the small screen’s buzziest series. Lady Gaga’s remake of A Star is Born and Melissa McCarthy’s biopic Can You Ever Forgive Me? both featured a bevy of scene-stealing drag performers on the big screen. Last year Harvey Fierstein’s seminal Torch Song Trilogy received an acclaimed revival on Broadway.

With Drag: Coming Through the Big Wigs of Show Business, author-entertainer Frank DeCaro thrillingly puts the history of the artform in perspective. It’s an almost unbelievably comprehensive tome — in his foreword, Bruce Vilanch accurately calls it “an encyclopedia.” DeCaro interviewed both drag professionals (beloved male actress Charles Busch and RDR superstar Bianca Del Rio) and one-timers (To Wong Foo’s Wesley Snipes), and he offers enthralling insight into innovators ranging from the nearly-forgotten Julian Eltinge to the vividly-remembered Divine and Sylvester. It’s a gorgeously-illustrated must-have for anyone with even a passing interest in drag culture.

Ahead of his June 15 book signing in Palm Springs, DeCaro chatted with Palm Springs Life about cross-dressing pioneers, why drag is so important to contemporary audiences, and the craziest show he’s ever witnessed.

What is the reason for the increased popularity and visibility of drag culture?

It’s all because of my book. No, actually you have to give the lion’s share of the credit to Mama Ru and RuPaul’s Drag Race. That glamazon and his little show about men in dresses have done more to put drag culture on the mainstream map than anyone this side of Harvey Fierstein. It has put drag front and center in the consciousness. And let’s face it, we need the glamour and glitter and ferocity of drag now more than ever. It’s no coincidence that we’re seeing the popularity of drag explode at a time when the political tide is so horribly conservative. Whenever you tell drag queens — or any LGBTQ people or other oppressed minority, really — to be quiet, we only get louder and more fabulous. There were drag queens fighting back in 1969 at Stonewall and, 50 years later, they’re still leading the charge. 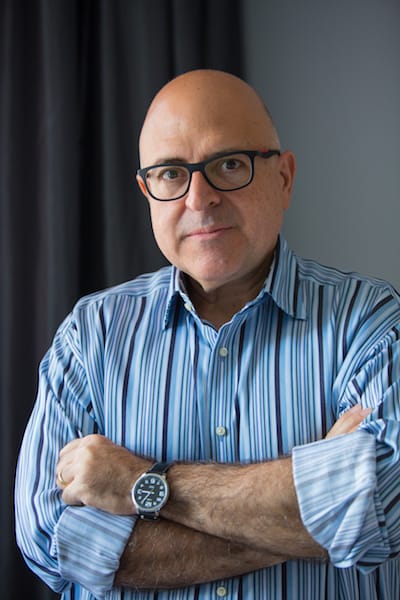 Author Frank DeCaro will sign copies of his book June 15 at Just Fabulous in Palm Springs. 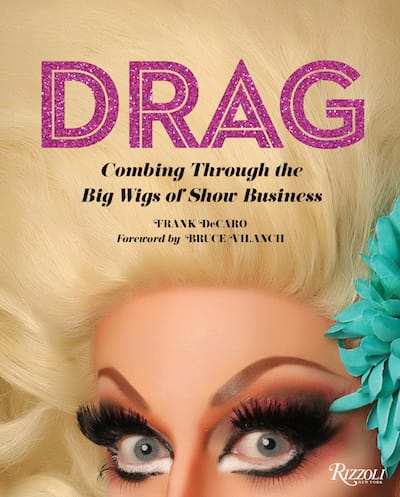 Why were you the right person to write this book?

When my editor, Robb Pearlman, came to me five years ago and said, “Someone needs to write a book on drag, and I think it should be you,” I wasn’t convinced. But then I started to think about it and realized that I was exactly the right person to write this book. I’ve been a fan of drag since I was a toddler. Ever since I saw Fred Gwynne as Herman Munster get hit by a bolt of electricity and turn into a cocktail waitress on The Munsters in 1966, I’ve been smitten with men in dresses. There’s a picture of “Aunt Herman” in the book. I may not have done much drag myself — I look like a Far Side cartoon whenever I do — but I’ve followed the careers of the finest drag performers of the last 50 years and had a front-row seat for a lot of their greatest moments. I really am Drag Hag No. 1.

While you were writing, what did you learn that most surprised you?

The most amazing thing that I learned researching this book is that drag has been a part of popular entertainment for as long as there has been popular entertainment. There was crossdressing in Ancient Greece, sure, but I mean drag as we know it. The Smart Set, as cool people used to be called, has always sought out and supported drag performance whether it was live, on television, or on film.

Why do you think RuPaul’s Drag Race has resonated so strongly with viewers?

I hate reality shows — I’m not that crazy about “reality,” period — but I’m obsessed with RuPaul’s Drag Race. It’s just a really compelling show — funnier and more moving than you’d ever imagine. When these queens share their back stories, they can really break your heart and then inspire you to be your best self. Plus, it’s really sparkly.

Drag has long been a popular form of mainstream entertainment with straight performers such as Milton Berle and Flip Wilson cross-dressing on network television. Pre-RuPaul, who do you think most strongly paved the way for all the amazing drag we see today?

The drag trope on television and in movies was always “look how ugly and funny I am in a dress.” Milton Berle, the man with the meatiest tuck in show business, was the queen of that shtick. He made a very fetching Cleopatra, but he wasn’t pretty. I give a lot of the credit to Flip Wilson and his pioneering TV variety show Flip.

He changed all that with his drag character, Geraldine Jones. She was sexy and pretty and feminist and confident and funny as all get-out. Geraldine had a Pucci wardrobe, a boyfriend named Killer, and she didn’t take guff from anyone. America instantly fell in love with Geraldine, and this was, like, 1970. Those bits are still funny. I know she influenced RuPaul, and Ru, well, has gone on to influence everyone. 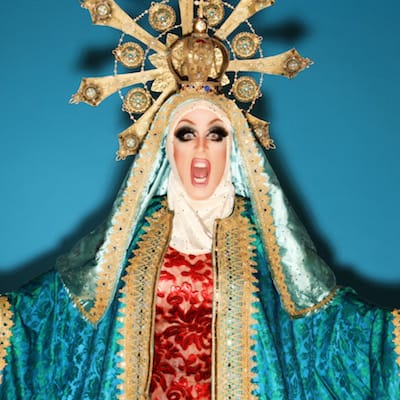 “Over the top” is literally the most accurate way to describe Tempest DuJour, one of the most mature and tallest Drag Race contestants ever.

What do you see as the difference between gay and straight drag performers?

The tradition of what I call “hetero drag” really is the same story told over and over again: A straight man, through some extenuating circumstance, is forced to put on women’s clothing, and, even though he never looks like anything other than a man in a dress and he can’t walk in heels, another straight man instantly falls in love with him.

That’s Some Like It Hot, Tootsie ... even Abe Vigoda got hit on when his character Fish, a New York City detective, did drag on mugging detail on Barney Miller. Abe Vigoda in a dress was what passed for “fishy” back in those days. Wrap your head around that!

Gay drag performers, on the other hand, have always been more camp, more clever, more nuanced, and more subversive — at least the good ones like Charles Pierce were, and still are. Honestly, though, I’m a fan of both gay men and straight ones doing drag — Santino Fontana in the new Broadway musical version of Tootsie is wonderful — but they’re two different schools of drag. It’s apples and oranges, but, thank heaven, it’s all pretty fruity. 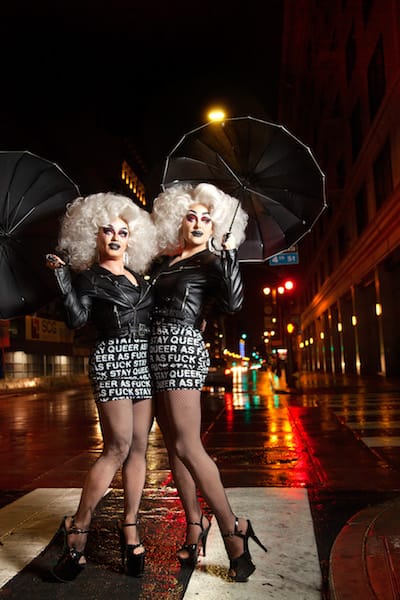 There’s no sibling rivalry between The Boulet Brother, who have achieved even more renown with their Dragula web series. 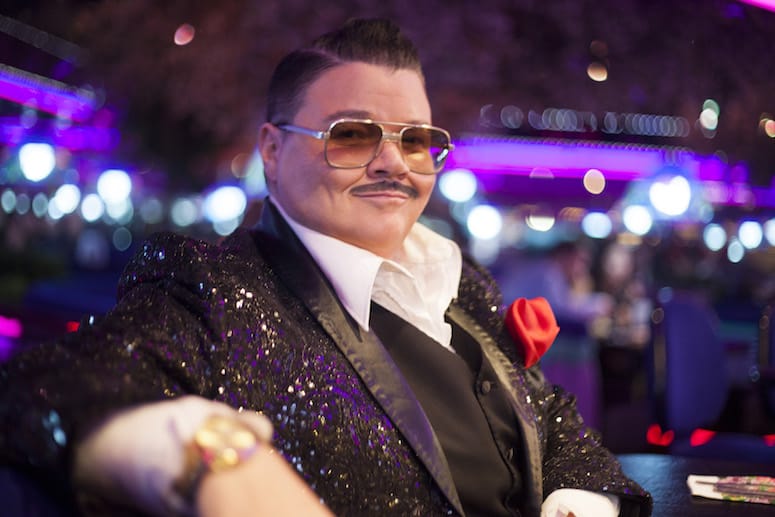 Much more than just a drag king, Murray Hill is the hardest working man in stand-up comedy.

Why are there so many more famous drag queens than drag kings?

I don’t mean to be flippant because this is a serious question, but women always get the fuzzy end of the mascara wand, and this is no exception. Female performers often have to fight twice as hard for half as much attention.

I do think, however, that drag kings start at a bit of a disadvantage because, generally speaking, the characters they’re creating are less glittery than the characters drag queens create. I love Murray Hill — he’s the RuPaul of drag kings — but on stage he’s wearing a tuxedo. He looks great, but a tailored men’s look doesn’t have a patch on, say, a beaded mermaid dress with a headdress that showers the stage in rose petals. I love a good chest wig, but they’re a lot less fun to play with than a rhinestone tiara.

Also, audiences are more comfortable with men dressed as women because the act of a man putting on a dress is less transgressive and, at this point in our culture, generally less subversive than a woman dressing as a man. That said, it’s time for all of us to really take a closer look at the amazing creativity of drag kings. There are a lot of them out there doing wonderful things. I hope someone writes a book focused on them!

How has the perception of men who perform in drag changed over the years?

Drag performers are allowed to be complete human beings now, with all the hopes and dreams and loves and family dramas and back stories as any other American. Modern queens don’t have to be devoid of sexuality, or claim to be masculine offstage, or say they’re straight if they’re not. They can be fully themselves and not apologize for their fabulousness.

I give a lot of credit for that to RuPaul’s Drag Race, which really has let drag queens be whole people in the eyes of the audience, and publicly live their truths. Also, you have to give props to playwright and actor Harvey Fierstein, who has been working towards this goal since he wrote Torch Song Trilogy. He has done as much to humanize drag performers as anyone. 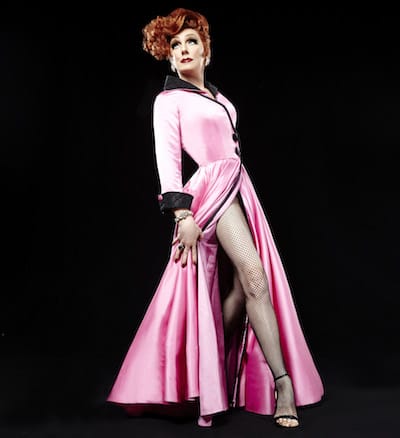 There have been so many amazing performances that I’ve seen in person: Divine at La Cage in Chicago, Sylvester in Detroit, Jim Bailey in Atlantic City, and Charles Pierce at The Ballroom in New York City — all in the ’80s — Charles Busch at Town Hall for Stonewall 25 — even Milton Berle came out in a dress that night — in 1994, and Lady Bunny and her cohorts at Wigstock in Tompkins Square Park back in the day.

But I have to say the one performance that gives me real street cred among drag aficionados is that I got to see the late, great Leigh Bowery do his enema show live in London. Simon Doonan, who has his own book on drag coming out in the fall, made me go.

It was in some legendary club — Taboo, I think — very late at night, and after waiting for what seemed like forever, Leigh came down from the ceiling on a swing wearing only gold body paint and a matching [merkin] to “Also Sprach Zarathustra.” He danced around for a minute and jiggled his fat, then threw his legs over his head, shot a geyser of water out his ass, got back on the swing, and went back up through the ceiling. It wasn’t Hamilton, but it was pretty dazzling to be in the room for that.

Where’s your favorite place to see a drag show in Palm Springs?

Don’t hate me, but my firsthand drag experience in Palm Springs is lacking! The last show I saw there was Chuck Sweeney as Miss Peggy Lee at the Copa Room. I know of some of the local queens — Arial Trampway, Bella Da Ball, Ethylina Canne — and I mention them in my book, but I don’t think I’ve ever seen any of them live. It’s a drag shanda and I’ve got to fix the situation immediately. Maybe when I do my signing at Just Fabulous, they’ll come and spank me. Hey, an old drag hag can dream, can’t he?