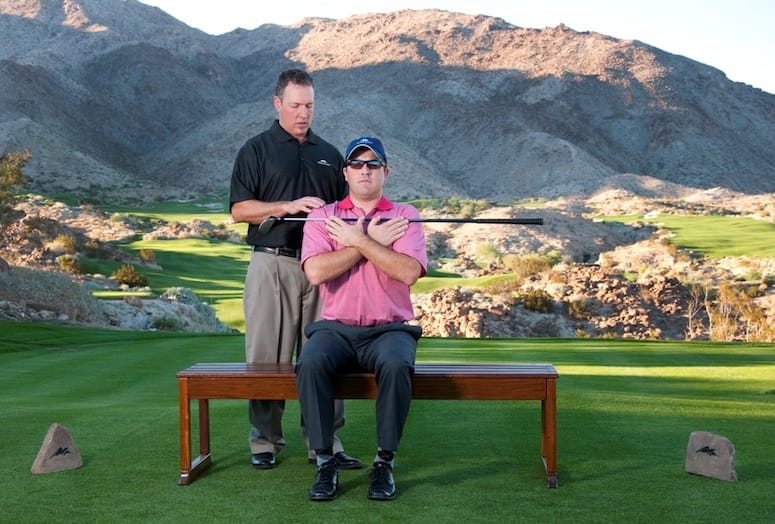 Frank Gustafson is a familiar face at Coachella Valley clubs, including The Vintage Club.

Since relocating to Palm Desert from NorCal in 2003, Gustafson hasn't marketed or advertised Gustafson Physical Therapy and Sports Medicine.

Why? He doesn't need to.

"We're small, and it did take a lot, but since opening our door (in 2003) we had a waiting list in about three months," Gustafson says. Frank Gustafson works with a golfer on stretching to enhance flexibility.

Working on a referral basis as a two-trainer team, the Gustafson shop goes hard for 10 months before taking some of the summer off to investigate new training and rehab techniques. Though the bustling would may seem to warrant a bigger space and burgeoining staff, staying small has kept a focus on top-echelon care and individual attention.

A 30-year veteran of physical therapy, Gustafson holds certifications in athletic training, strength and conditioning and with the Titleist Performance Institute.

"Most of our clients come to us because there's something that's limiting their performance, whether it's pain or a dysfunction that their coaches picked up," Gustafson says. "Pain is a great motivator. So we help a client through the injury and then eliminate the limitation before we add strength or power to the athlete."

With a storied background that began with hockey and evolved to working the 1996 and 2002 Olympic Games, the walls inside Gustafson's modest offices tell the story of his diverse training career. Frank Gustafson is a big proponent of using his techniques in concert with instruction from the club professional.

Amid a taut, necessary amalgam of bikes, weights, clubs and training aids, the images, autographs, and banners from a seemingly ceaseless list of clientele runs from pro soccer players, to golfers, to cyclists, to gymnasts to ruggers and well beyond.

Oh, and Gustafson recently added another notable client to his stable: The King.

Around the turn of the year, Arnold Palmer's reps contacted Gustafson to work with Palmer on golf rehabilitation.

"To get a call from Arnold Palmer's people, and for him to come in was a real honor," says Gustafson, smiling. "It's like working with Babe Ruth, right? And he was excited where we got to in a relatively short time together."

Eschewing an "exercise of the week" mentality in lieu of personalized, safe and effective exercise programs, Gustafson's unique approach to training is as celebrated as the writing on his office/gym walls.

"It's been an exciting ride," Gustafson says. "We never know who's going to call."