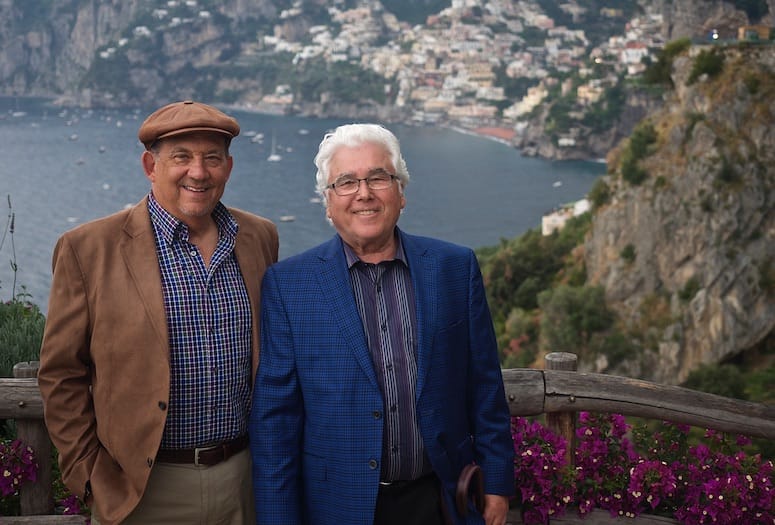 Author Mark A. Thompson with the subject of his book, Umberto Autore, who was Frank Sinatra's tailor.
PHOTOGRAPHS COURTESY MARK A. THOMPSON

“I think I’ve been shadowed by Frank Sinatra my whole life,” author Mark Thompson says. Long before Thompson met Italian clothier Umberto Autore, and decades before he would write about Autore in a book called Sinatra’s Tailor, Thompson was immersed in Sinatra’s mellifluous tones — both through records on the phonograph and the voice of his own professional-singer father.

Years later, Thompson would cross paths with Sinatra in Palm Springs — not just once, but again and again. Thompson worked closely with one of Sinatra’s key collaborators, saw Sinatra perform, and even performed for the legendary entertainer. Now, Thompson continues his Sinatra connection with the release of his debut novel, Sinatra’s Tailor.

“That connection has always been there,” Thompson says, “part of my soul.”

While Thompson has changed careers as often as some folks change apartments, Sinatra has remained a constant.

The men first met in the 1970s, when Thompson was a speech pathologist at Desert Regional Medical Center. One of his early patients was Pat Henry, a comic who regularly opened for Sinatra. Henry had suffered a stroke and needed to restore his speaking abilities so he could get back to work.

Thompson worked with Henry almost daily. He would visit his patient at home, where it was “like something out of the Godfather or the Sopranos,” Thompson recalls. “All his buddies would be there… just hanging out.”

Sinatra was among those friends. That was Thompson’s first personal introduction. He assured Sinatra that his opening act would be back onstage in no time.

The two met again when Sinatra performed at a fundraiser for the hospital. A few weeks later, they were together again, this time with the tables turned: Thompson was the one singing. He was the cantor of the local synagogue, and Sinatra was the guest of honor at a celebration of its new sanctuary.

“I sang for Frank Sinatra that day, which was the highlight of my career,” Thompson says. “After that, I thought, ‘It doesn’t get any better than this.’” 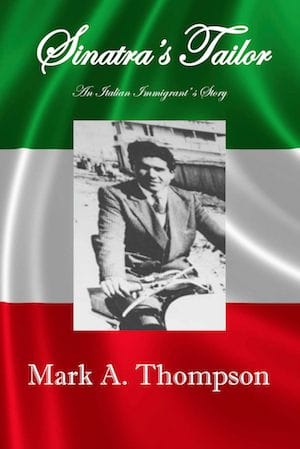 So he figured it was time to change jobs. The 1983 movie Trading Places inspired Thompson to become a stockbroker. He moved out of the Coachella Valley and trained his eye on the market. Needing a new wardrobe for his new profession, he went to a neighborhood tailor hehad met years while working in the menswear section of a department store as a high-school student.

“That connection has always been there. Part of my soul.”

The tailor was Autore, another Sinatra connection. The Italian immigrant, who always called Thompson “young-a man,” said he had made many suits for Sinatra.

Thompson had already been writing for years, even producing and starring in his own one-man show about Galileo. Once he met Autore, though, he knew he had to tell his story. He had to follow the Sinatra link.

For years, Thompson and Autore met weekly. Autore would regale him with unbelievable stories about his life in an orphanage as a child and how he escaped Italy during World War II.

They eventually made several trips to Italy together, where Autore pointed out people and places from his youth. Along the way, “Umberto has become like a father figure to me,” Thompson says.

Sinatra’s Tailor is the result of their friendship and countless hours spent together. A fictionalized biography, it tells Autore’s origin story: how he made his way to the United States and ultimately became a trusted tailor for the rich and famous.

The novel heralds the latest career for Thompson, now 71, and adds another link to his lifelong connection to a certain celebrated singer.

• READ NEXT: Frank Sinatra Collected Dozens of Friends Along the Way. But it Wasn’t Always Nice ’n’ Easy.