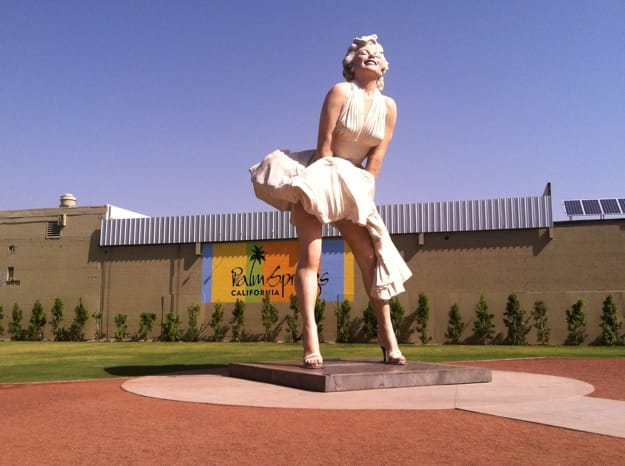 June 1 is Marilyn Monroe’s birthday. The late starlet would have been 87.

The “Forever Marilyn” statue that pays homage to her has resided in downtown Palm Springs at the corner of Palm Canyon Drive and Tahquitz Canyon Way since May of last year. PS Resorts, representing a consortium of Palm Springs hotels, is taking advantage of her continued presence through the summer to make sure her birthday is celebrated in style.

The free party starts at 6 p.m. with a performance by Richard Byford and Mary Avery. The Coachella Valley couple has been performing together since 1971, touring the U.S., Europe and the United Kingdom delivering their unique brand of folk/pop music.

At 7:30 p.m., Jeffrey Allen, a Las Vegas entertainer whose act pays tribute to Sir Elton John, will reprise his concert in 2012 at the “Forever Marilyn” statue that commemorated the 50th anniversary of Monroe’s death.

Allen’s act has been featured in the “Legends in Concert” review in Las Vegas, considered the pioneer of live tribute shows. He personifies Elton to the tee, including the outrageous outfits that marked his career in the 1970s and ‘80s, and the songs that everyone can sing along to like “Bennie and the Jets”, “Rocket Man” and “Crocodile Rock”.

Accompanying Allen will be drummer Joey Covington, who was a member of Jefferson Airplane (later Jefferson Starship) and also played with the real Elton John. Covington co-wrote the 1976 Starship hit, “With Your Love”.

The evening is capped off with a free birthday cake at 9:30 p.m. provided by Sherman’s Deli.

The “Forever Marilyn” statue, which depicts Monroe in the movie, “The Seven Year Itch”, will remain in Palm Springs through August after PS Resorts negotiated a longer stay with The Sculpture Foundation, which owns the statue. There has been discussion of raising money to buy the statue and permanently display it downtown.