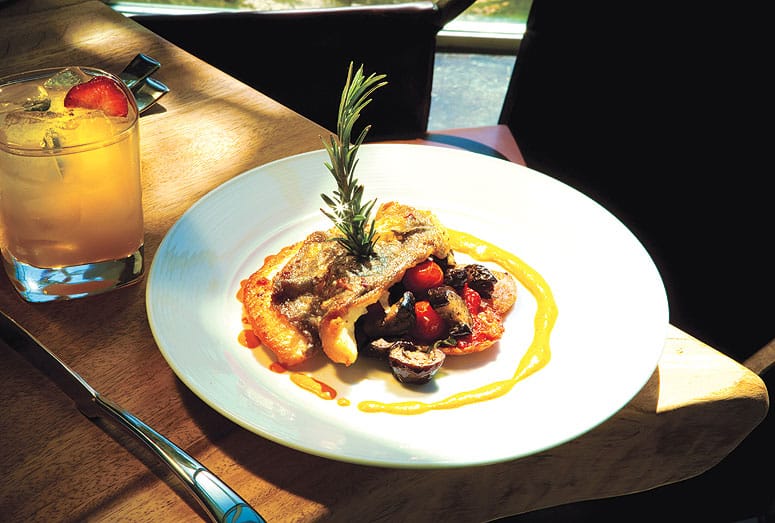 Eating close to the earth means eating foods that have retained the color, nutrition, and flavor that nature intended: They’re in season, extremely fresh, locally grown and harvested, and delivered to the table at the peak of their ripeness.

This ever-burgeoning farm-to-table movement may seem out of sync in the arid desert, but the Coachella Valley boasts a year-round bounty of colorful fruits and vegetables, and the greater region is also home to several small family farms that humanely raise pasture-fed eggs, poultry, beef, and pork.

Figue Mediterranean Restaurant sets the standard with its solid commitment to premium, organic ingredients. When it opened in March 2013, diners asked owner Lee Morcus how he could operate a Mediterranean restaurant that had nothing made with tomatoes on the menu. His answer was simple: They weren’t in season. Indeed, the menu at this upscale La Quinta restaurant changes often, according to the season and market availability. Dates, figs, citrus, and herbs are grown on property, with other produce sourced from small, local farms.

You won’t find farm-raised fish on the menu, though: Morcus insists on wild-caught only. The restaurant makes all of its charcuterie in house and sources whole pasture-raised pigs from a humane and ethical farmer in nearby Julian, who raises five different breeds of heritage pork that feast on acorns. In fact, all the meats served at Figue — beef, lamb, pork, and chicken — are free of antibiotics and hormones. The eggs in the pasta are pasture-raised and organic, and the flour is imported from Italy, producing better-tasting pasta that is guaranteed to be free of genetically modified organisms.

This whole-foods sensibility is reflective of Morcus’ childhood on a small family farm in southern Colorado, and it carries over into his other Coachella Valley eateries, including The Chop House, Kaiser Grille, Grind Brgr Bar, Hog’s Breath Inn, and Jackalope Ranch.