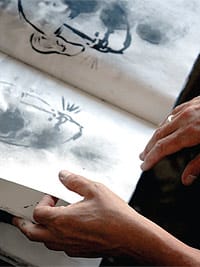 “POP ART” read faded yellow letters on a black metal sign standing in front of a decrepit brown trailer off Highway 62. The same words repeat on the door, which was painted to match the pennants hovering above, discolored and covered in dust.

For art enthusiasts, there couldn’t be a more appropriate welcome, a gratifying announcement to High Desert travelers that they’ve arrived in a largely creative, albeit unchartered, environment.

For decades, the desert communities of Morongo Valley, Yucca Valley, Joshua Tree, and Wonder Valley have attracted several of the art world’s best — Ed Ruscha, Andrea Zittel, Jack Pierson, and the late Jason Rhoades among them. Their shared experience partly encouraged another group of dynamic art stars to thrive in a bewildering landscape perhaps somewhat inadequately described as barren and empty.

“The desert landscape is unscripted,” says Thom Merrick, an internationally recognized mid-career artist who moved to Wonder Valley six years ago after living between New York and Europe for nearly 20 years. Artists thrive on currents of uncertainty. “Artists here have to be self-reliant with some wit and problem-solving skills to battle the elements. There are many different groups here, with a slant toward community and shared resources, which is refreshingly positive.”

Possessing a vast knowledge of art history and working in different media — painting, sculpture, and installation — Merrick is known for creating formally challenging work with an impressively mobile aesthetic. Early in his career, he exhibited with two prestigious New York galleries: American Fine Arts and Pat Hearn. In 1992, he exhibited work at Documenta IX in Kassel, Germany, and, in 1999, the P.S.1 Contemporary Art Center in New York. He had a solo exhibition at the Sprengel Museum Hannover, Germany, in 1997.

Merrick credits his decision to move to the desert to Pierson, known worldwide for his photographs of young desirable men, as well as his large-scale word sculptures, which convey a tale of isolation and longing. “I ran into Jack by chance in Chelsea in 2001. We have known each other since the mid-’80s. During our conversation, I remarked that I needed to get a place outside of New York. He understood all too well and offered the keys to his house and his truck in the desert. That is how I got here: by chance and by friendship.”

It seems friendships made in the high desert extend as far and wide as the land itself. Artists here are far from isolated. They frequently socialize at local art openings, swap meets, farmers markets, and the popular Pioneertown hangout Pappy and Harriet’s, which recently screened Polish-artist Piotr Uklanski’s film Summer Love for Zittel’s hugely popular High Desert Test Sites weekend.

“The desert community is small and focused, attracting like-minded people; and, geographically, it’s much easier to socialize here than in Los Angeles,” says Claudia Parducci, an emerging artist who works with multiple media and has lived part-time in Morongo Valley for three years. “There isn’t a lot of competition for activities out here. People are less harried than in the city and more spontaneous as a result.”

Parducci — a recent CalArts graduate garnering interest among art insiders with her latest body of work, the Survival Camp project — can be found on any given weekend walking about her cactus and ocotillo garden, star-gazing, playing pétanque with her husband (artist Peter Alexander), and, of course, making art. “The environment is very specific out here,” she says. “Spaces are vast, weather is extreme, and nature is loud. One gets tuned in to all of this, and it begins to make its way into the work. I have only made a couple of projects that relate specifically to the desert, but the place and the sense of escape that it engenders have definitely affected my thought process.”

A few miles north of Parducci’s studio, passing by several oddball antique shops and a handful of galleries exhibiting local artists, finds one at the Joshua Tree studio of Jill Giegerich, a distinguished painter, sculptor, video, and installation artist who agrees with Parducci’s sentiments. “Everything I do and every place I live has an effect on my work, no less the desert. I find working here to be extremely beneficial. I’m a very focused person, but I can attain a concentration here that is unusual, even for me.”

A Landers resident for three years, Giegerich is incredibly current regarding any and all creative events taking place in the community and is a force of nature in her own right. Since the 1980s, her dynamic, bold spirit captured the art world by storm. She has exhibited with contemporaries such as Lari Pittman, Mike Kelley, and John Baldessari. A former student of the late Elizabeth Murray, Giegerich was quickly signed first by prominent Los Angeles dealer Margo Leavin and later by the visionary Fred Hoffman — all the while being collected by several major institutions, namely the Museum of Modern Art in New York, the Museum of Contemporary Art in Los Angeles, The Eli Broad Foundation, and the Whitney Museum in New York.

Considering her many achievements, Giegerich hasn’t felt obligated to continue living the fast-paced life in order to produce relevant work. “There is a space and a silence here that can definitely loosen the mortal coil. It’s an interesting mixture of provincial, urbane, and global. It’s not for everyone.”

Yet the challenging landscape hasn’t kept Giegerich from experiencing “a very powerful sense of community,” one that enthusiastically welcomes her annual film festival that she’s continued to organize on her property in Landers. Most recently, she co-curated the event titled Joe Dark Shadow Theatre with Miyoshi Barosh and S. Quinn and took advantage of the opportunity to screen the project during the Chinati Foundation’s 2007 Open House Weekend in Marfa, Texas, another out-of-the-way art hot spot.

For this reason, it’s not at all peculiar that Barosh, Giegerich’s friend and colleague, has continued to share a large, light-filled, converted-garage studio in Yucca Valley with fellow artist Jeff Colson for three years. A charismatic artist, as well as arts writer and editor, Barosh has contributed to several projects, including monographs for Mike Kelley, Vija Celmins, and Felix Gonzalez-Torres, all published by A.R.T. Press.

Colson, on the other hand, learned of the desert from the legendary Ruscha, who has held property in Pipe’s Canyon since the 1970s. For the past 15 years, Colson has valued the vast amount of physical space accessible to him given the desert location, which has facilitated fabrication of the large-scale fiberglass, wood, bronze, and welded steel works that will be exhibited at ACE Gallery in Los Angeles in early 2008.

There remains a continual undercurrent of innovative ideas along with an insatiable desire for knowledge in the High Desert, that keeps the community far from culturally and creatively parched. One of the most exciting new developments is the creation of The Wonder Valley Institute of Contemporary Arts, spearheaded by artist Chris Veit, Pierson’s project manager and a former freelance designer for the avant-garde couturier Jean-Paul Gaultier. Veit, who has lived between Wonder Valley, Los Angeles, and Philadelphia for the past five years, has taken on this personal project “to bring a permanent institution dedicated to introducing, experimenting, and integrating contemporary art into the High Desert communities from a global perspective.” Veit plans to open the center during Zittel’s 2009 High Desert Test Sites project and has already gained attention of several major art world supporters to see its development through.

Other projects planned include Los Angeles-based gallerist Daniel Hug’s organization of a site-specific installation with Swiss artist Kerim Seiler that involves an elaborate system of lights working incongruously with a small solar system. Hug, who amusingly refers to his Wonder Valley cabin of three years as “a work in progress,” plans to exhibit the piece on his property once details are finalized.

To look at the desert landscape these days is somewhat akin to looking at a pointillist painting by Georges Seurat: There are many artistic individuals dotting the landscape, which permits a completely fresh and transcendental experience. It is here where artists learn discovery by way of discipline and freedom by way of their inherent intuition and interest. These explorers are far from lost, but rather are on the cutting edge.