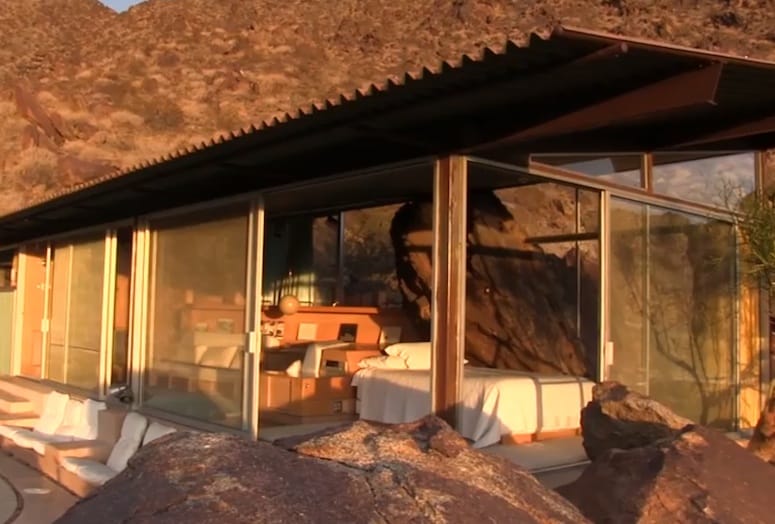 Frey House II is the Steve McQueen of mid-century houses.

Like the actor, the house is the essence of cool, without trying to be cool.

It knows what it is, and it does it better than anyone else can. Handsome. Simple. Durable. Zen. Iconic.

Both photographed well, but filled the frame even better for motion pictures.

Frey House II is the second of two personal homes designed and constructed in Palm Springs by legendary architect Albert Frey. He studied the precise positioning of the hillside and its relative solar patterns – both summer and winter – long before he started building in 1963 on a piece of land many doubted could be tamed.

When the dust settled, he had achieved the impossible by turning what seemed to be his biggest obstacle into what he knew all along would be his biggest asset – a multi-ton boulder in the middle of the property, which now serves as a touchstone of the house.

“Frey House II is located at the top of a private road that’s very steep, so you can imagine the challenges when the house was under construction. Bringing steel, and concrete block, and all the materials up there. And also just the lot itself. Nobody, I think, would ever imagine that it was desirable because it was so steep, and such a difficult site. But Albert took that challenge on," says Sidney Williams, curator of Architecture and Design at the Palm Springs Art Museum.

It was that spirit of quiet confidence imbued with vision, poise, and genius that filled the project before, during, and after its construction. Because of those qualities, the house is an indelible reminder of the sheer beauty that can be willed into existence in face of adversity. And like its silver screen counterpart, Frey House II is, and always shall be, the essence of cool.

Tours
Frey House II can be visited by the general public through tours available only during Modernism Week, Feb. 13-23, by visiting www.modernismweek.com