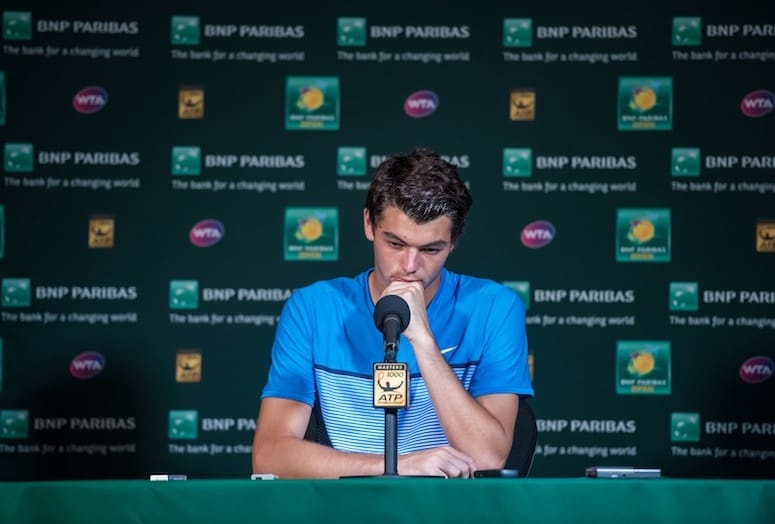 Taylor Fritz didn’t have his serve Thursday — hey, sometimes Andy Roddick and Pete Sampras struggled — but he did have his sense of perspective. After Fritz was whipped by the other young American hotshot, Francis Tiafoe, 6-3, 2-6, 6-3, in their first-round match of the BNP Paribas Open, he was asked how long it would take him to get over a loss.

Until that moment, most of Fritz’s comments in the media room were the sort expected from a disappointed 18-year-old: that he made too many mistakes; that he usually handles pressure very well. But the recovery time after a defeat?

“It depends on the matchup,” he said. “If I lose to [Novak] Djokovic, I get over it in 10 minutes. Not even that. Maybe two. But these types of matches, this one really stings. It might take me a day or two.” By contrast, winner Frances Tiafoe was all smiles afterward.

This one was the future of U.S. men’s tennis, or so we have been advised, two young pros — Tiafoe also is 18 — who have been making progress and making us notice.

Didn’t Fritz, who’s from over the mountains in Rancho Santa Fe, reach the final of the Memphis Open a month ago, the youngest American to advance that far in a top-level event in a quarter-century?

Didn’t Tiafoe, who’s from Maryland, by way of Sierra Leone, make it to the second round of this year’s Australian Open, no small achievement for someone who at 6-foot-3 is no small individual?

Yes, tennis is an international sport, and the Djokovics, Federers, Nadals, and Murrays are as appreciated here in the U.S. as they are in Serbia, Switzerland, Spain, and, Britain. But every country needs a few stars of its own. And so, without a win in a Grand Slam tournament since 2003, when Andy Roddick took the U.S. Open, there’s been an almost desperate hope for the somebody, anybody, to fill that role. Taylor Fritz contemplates his answer to a question during the postmatch press conference.

So a mid-afternoon match between two teenagers on a 90-degree day before maybe 3,000 people at most in Indian Wells’ mammoth (16,100-seat) and magnificent stadium attained an inordinate degree of importance. Would one of these kids be the Chosen One?

Chosen or not, Tiafoe was the successful one, as he had been the three previous times the two had played in the junior ranks. This was the first time as pros.

“I’m loving every minute of it,” said Tiafoe, referring to his brief career, not the domination of Fritz. “I go out and am aggressive. I just want to have fun.”

Fritz, son of a mother and father who are tennis pros, wasn’t having any fun. “I didn’t perform at my best, said Fritz. “My serve was really off. I felt I made too many mistakes. I usually handle pressure well.  I don’t think I played at the level I needed.”

To say he took the loss hard, well, that’s Fritz. “I questioned why am I out here doing this, after losing in U.S. Open qualifying,” he said. “Is it even worth it? Do I want to do it again? The trick is to take it to the point where you’re just dying on court, then work harder.”