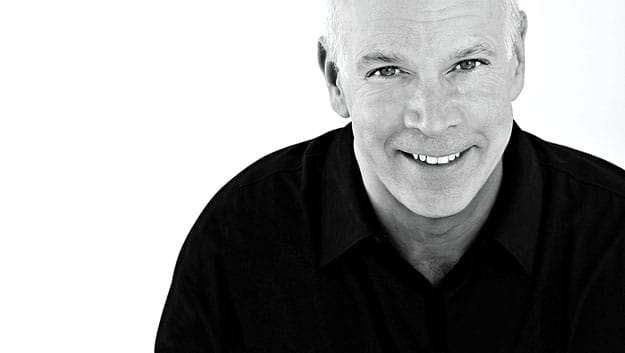 “We added a few more windows, which is hard to imagine in a house with this much glass,” Zippel laughs. A white baby grand piano sits in one corner of the open living room, while two opposing walls of windows frame perfect desert sunset panoramas.

Zippel and his partner, architectural and film set designer Michael Johnston, have owned the 1967 William F. Cody-designed house for almost three years. They’ve restored it to its original all-white interior and exterior motif and added a seamless extension. Only some details and landscaping remain, “and when that’s all done, hopefully within a year, it will stop,” Zippel wistfully predicts. Regardless, Palm Springs Modern Committee awarded their renovated Cody property the prize for architectural restoration of the year.

Born in 1954 in Easton, PA., Zippel began writing parody lyrics to popular tunes in order to make fun of his high school teachers. After a stint at Harvard Law School, he connected with legendary Broadway composer Cy Coleman (“The Best is Yet to Come,” “Hey Big Spender,” “Witchcraft”) and Larry Gelbart (co-creator of the TV show M*A*S*H and screenwriter of films like Tootsie and Oh, God!). Coleman and Gelbart took the young Zippel under their musical wings, and soon they produced the 1989 Broadway show City of Angels. The production won six Tony Awards, including Best Musical.

On Feb. 8, Zippel will direct Cy Coleman’s Broadway at McCallum Theatre in Palm Desert, in honor of his longtime mentor and collaborator.

What about Palm Springs appeals to you, an East Coaster?
The first time I came to Palm Springs was in the mid ’80s. Larry Gelbart had a house out here. To be honest, it didn’t seem like there was much to do, and I just didn’t get it. Michael has been coming out here since he was a kid, when his parents took him to the Riviera [hotel] in the late ’50s. Over time, I discovered it’s not only beautiful, but very few places in the world have such an interesting mixture of people and in such an exotic setting. There’s intellectual activity here. There’s culture. I think it’s a magnet for talent. Michael and I have been going back and forth between New York City and Palm Springs, about 50-50. But in 2011, we probably spent more than half our time here. I do a lot of work in the desert. I’m not the most spiritual person you’ll meet, but it is inspiring here. The beauty is breathtaking, and every morning I wake up here amazed at how beautiful it is.

How long have you and Michael known each other?
I met Michael when he was living in L.A. 18 years ago. He was a production designer for movies, working on films like The Fisher King, The Client, Single White Female, and Jeffrey. Several years ago, we were reading the Sunday New York Times, and there was an article that predicted that, within a year, there would be marriage equality in the state. We kind of looked at each other, and he asked if I wanted to get married. And I said, “Of course.” And then we cried. Same-sex marriage wasn’t possible until this year in New York, and we just got married [before the holidays]. We were married next to the fountain at Lincoln Center. A friend of ours is an Internet minister, as well as a Broadway press agent. He married us with my sister and niece and another friend as witnesses.

How does one get from Harvard Law School to Broadway?
I went to law school because I’m a fairly pragmatic person. I thought going to law school and passing the New York bar exam would give me a good education and a lot of options. Becoming a lyricist is sort of like becoming a shepherd. You can’t really train for it. And even if you do, you have no idea whether there’s going to be a flock or an opportunity. So I thought I might end up working for a film company or being an entertainment lawyer.  There are other lyricist/lawyers, believe it or not. Cole Porter spent one year at Yale Law School. Oscar Hammerstein also spent some time in law school; and Arthur Schwartz, who wrote songs like “That’s Entertainment!”, was a practicing lawyer. I think the degree of success on Broadway is inversely proportionate to the amount of time you spent at law school. [Laughs] Cole Porter spent the least amount of time in law school, so there you go.

Tell me about the genesis of your show, Cy Coleman’s Broadway.
Four years ago, we did the show at The Kennedy Center in Washington, D.C., and it went really well. The following year, we did it in San Francisco for a week and then at the Orange County Performing Arts Center for a week. Then the McCallum invited us to bring it to the desert. We have Broadway singers, including Carol Woods (who was on the Grammys last year), Tami Tappan Damiano, and Jason Graae. The singers perform Cy’s songs; and Michael Kerker, director of musical theater at ASCAP, and I talk about Cy. We have some terrific video clips. It’s an interview format, sort of an informative concert. It’s a very casual, lovely evening; and I’m excited to be doing it here. Christopher Marlowe, a brilliant musical director from New York and now a full-time Palm Springs resident, has been the arranger and conductor of the show from the very beginning; and he’ll be at the piano.

What was Cy like as a person?
Cy was amazing. He was very smart and funny and one of the most self-confident people I’ve ever met. He changed my life. When I met him, I was a struggling lyricist and I’d never been on Broadway. He and Larry Gelbart came along and gave me a chance to write City of Angels. It took a lot of courage on both their parts to take this unknown kid who was 20 years younger than either one of them and risk their show on me. Cy treated me like a gifted protégé, and Larry was a genius. As time went on, we became closer; and working together became easier and more natural after we had some success. But it took me a little while to get past the fact that I was working with my heroes, and I was in awe for a long time. I thought, “How did I get here?”