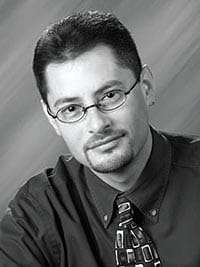 In his 1954 essay "Abstract, Representational, and So Forth,” Clement Greenberg — the most influential art critic of the second half of the 20th century — asserted that “… what counts first and last in art is quality; all other things are secondary” — which makes perfect sense to art junkies with a trained, confident, and reliable eye, but sounds utterly absurd to so many casual observers who view art as impossibly subjective, if not “stuff ” they can make themselves.

When Greenberg, who died in 1994, spoke, “it was as if not merely the future of Art were at stake but the very quality, the very possibility, of civilization in America,” Tom Wolfe wrote in his wonderfully irreverent 1975 art-world critique The Painted Word. “He radiated a sense of absolute authority.”

None of this is lost on Steve Nash, who quietly took his place last spring as the new director of Palm Springs Art Museum. Nash sought to renew the museum’s relationship with the community by expanding the scope of its interior renovation and boldly inserting shows that signal a fresh direction for the institution. The ongoing exhibition of 34 works in Picasso to Moore: Modern Sculpture from the Weiner Collection reinforces and celebrates the museum’s rich heritage, while a pitch-black gallery across the way leaps forward in time with Bill Viola: The Crossing, the groundbreaking 1996 video/ sound installation that Greenberg, whose critical star fell with the rise of Pop and Op art, would have surely panned. Viola, however, was among 85 artists selected for the historic exhibition Los Angeles 1955-1985: The Birth of An Artistic Capital last year at Centre Pompidou in Paris.

The Crossing, on view through Dec. 23, builds on the artist’s early-1970s exploration of sound as a material entity; he became interested in “field perception” rather than “object perception.”

But the sculpture exhibition has been igniting excitement in museum circles and beyond. In this issue of Palm Springs Life ART+CULTURE, I speak with the museum’s chief curator, Katherine Hough, and Gwendolyn Weiner, custodian of the Weiner collection, for the feature “Maverick Vision.” Ted Weiner, who built this world-class collection, had the passion and confidence in this period of sculpture that left some of the most venerable collectors and critics looking like latecomers to the party.

In his 1968 lecture, “New Art in the ’60s,” Greenberg conceded, “The different mediums are exploding: painting turns into sculpture, sculpture into architecture, engineering, theater, environment, ‘participation.’ Not only the boundaries between the different arts, but the boundaries between art and everything that is not art are being obliterated. At the same time, scientific technology is invading the visual arts and transforming them even as they transform one another.” The Viola installation punctuates this in transformative fashion.

“Maverick Vision” is the perfect foil for “Fresh Paint,” in which writer Veronica Fernandez takes us on a wild ride through the High Desert, where artists boasting international exhibition resumes revel in wide-open and equally remote spaces.

Palm Springs Life ART+CULTURE keeps you on the cutting edge while celebrating the desert’s art heritage in all media. In addition to our advice on how to buy and invest in visual art — Intelligencer and our articles on artists and collections, we select seven must-see stage performances in “Light Up the Night” and offer a comprehensive schedule of visual and performing arts and a convenient directory of venues.

For additional articles and videos about artists who work and/or show in the Coachella Valley, point your Web browser to www.palmspringslife.com, scroll down to the popular categories, and click on Art. And watch for my art blog beginning in early 2008.